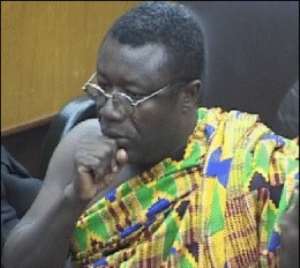 DR. KWAKU Afriyie, who was given a ministerial knock-out as the Minister of Health during a ministerial reshuffle early this year, has finally resurfaced from his hide-out at Sefwi-Akontobra village, with a stern warning to government for jettisoning the party position on the election of District Chief Executives.

According to him, it was the party's staunch position to get DCEs elected but he could not fathom why the party has all of a sudden changed from such position, and was rather appointing DCEs and as well giving DCE positions to only party activists.

He has therefore warned the government to stop playing what he termed as 'politics of pacification' and muster courage to elect and, as well prosecute, DCEs who may misconduct themselves in the course of their duties in order for the party structure to be strengthened as compared to what the party is witnessing now.

Speaking in an exclusive interview with The Chronicle, Dr. Afriyie called on the government to amend certain portions of the 1992 constitution in order to get DCEs elected.

He said the opposition NDC was fast catching up and if the NPP party wanted to fall as the former party did in 2000 then the party should change its position on the appointment and confirmation of DCEs to only party activist.

He suggested to government that in order for the party to get strengthened in areas where it was obviously a waterloo for the opposition NDC party, not to appoint NPP party activists to occupy DCE seats in such areas, but rather have an opposition party member to take up the latter seat and be elected for.

This would also add to the President's belief in an all-inclusive government.

According to Dr. Afriyie, however, the NPP was a party of family value and law of order, so to play politics of pacification with the perpetrators who shot and killed demonstrators of Kumipreko-Yabre demonstrations when the party was then in opposition would be out of place.

"I don't like politics of pacification and I do not see the party doing anything to bring the perpetrators to face the full rigors of the law," he observed.

According to him, facts and documentary evidence were there for every one to see, so the government should brace up to let justice prevail.

As a result, he has therefore called on the Attorney-General and Ministry of Justice, as well as the Interior Ministry, to gather courage to bring the perpetrators to face the justice of the law of our land.

Touching on his personal whereabouts, Afriyie said he had been at his village organizing the party towards election 2008 because the party had not been performing well in the Sefwi area he described as the cocoa belts of the country.

Oslo Chancery: Minority’s Due Diligence Saved Ghana Over $4....
41 minutes ago

Dumsor Is Back, Bring Out The Timetable Now – Jinapor To Gov...
1 hour ago