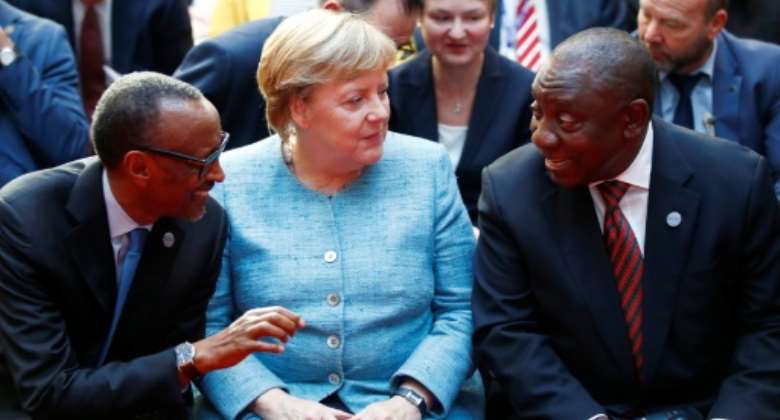 Chancellor Angela Merkel on Tuesday pledged a billion euros to incite businesses to invest in Africa, as she urged the private sector to take a closer look at the continent's "huge" economic opportunities.

The creation of the fund, announced during an investment forum in Berlin, is aimed at getting small and medium-sized companies to grow their presence in Africa.

Germany has been seeking to help boost economic development in Africa, as it hopes that better work prospects and living standards on the continent would help curb illegal migration to Europe.

"This is modern development policy," she told the forum.

The new fund would go towards offering loan and equity financing to European and German SMEs seeking to invest in Africa, equity financing for African SMEs as well as the establishment of a network offering advice to potential investors.

Stressing Africa's "huge potential for growth", Merkel noted that "for many years we have been very focused on Asia. I think that in future we should turn our sights more on Africa."

The gathering, attended by leaders from around a dozen African countries, is part of Merkel's so-called "Compact with Africa" initiative launched last year during Germany's stint as G20 president.

The ambitious scheme aims to help African countries attract private investment along with technical and financial assistance, in return for reforms that improve the business climate, such as fighting corruption or improving the rule of law.

"It is of great interest to Europeans that African states have good economic prospects," Merkel told the audience, which included Rwandan President Paul Kagame and South Africa's Cyril Ramaphosa.

'Not aimed at poorest'

Merkel has placed a strong emphasis on African diplomacy in recent months, backing efforts to boost prosperity on the continent in order to dissuade its people, especially the young, from setting off for Europe.

The veteran chancellor has come under intense pressure at home to stem the flow of migrants after the arrival of more than a million asylum seekers since 2015 deeply polarised Germany.

Most of the migrants came from conflict-torn Syria, Afghanistan and Iraq but many thousands also arrived from impoverished African countries -- even though their chances of winning political asylum are slim.

Addressing the conference, Rwandan leader Kagame welcomed investments by the likes of Volkswagen and Siemens in his country, which he said had spurred interest from other foreign companies as well.

Ghana, Tunisia and Ivory Coast have together already received 365 million euros ($414 million) in financial assistance under the "Compact with Africa" initiative, mainly in the form of low-interest loans.

Critics however complain that the project is not aimed at helping Africa's poorest nations, focusing instead on countries whose living standards are already improving -- and are a more interesting destination for export champions like Germany.

Der Spiegel weekly also slammed the conference for putting business above politics by inviting autocratic leaders such as Egyptian President Abdel Fattah al-Sisi "who has thrown thousands of regime critics in jail and suppressed civil society".

Residents of Settlement unhappy over destruction of road in ...
28 minutes ago