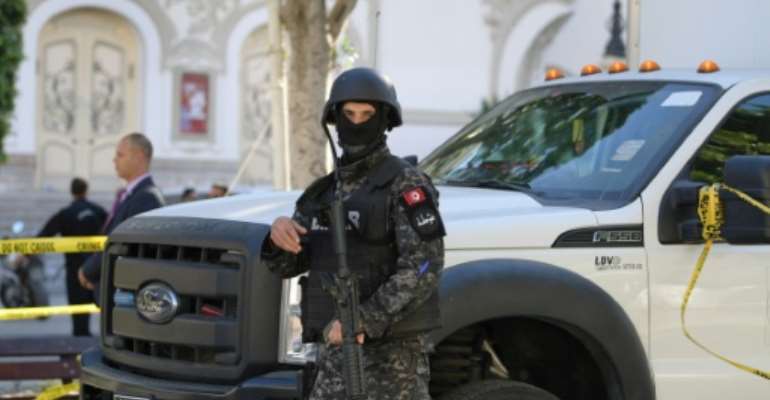 A member of the Tunisian security forces stands guard at the site of a suicide attack in the Tunisian capital Tunis on October 29, 2019. By FETHI BELAID (AFP)

A woman who blew herself up on a busy street of the Tunisian capital this week has been identified as an unemployed graduate, the prosecution said Tuesday.

Mna Guebla detonated a bomb Monday near a gathering of police cars in Tunis' upmarket Avenue Habib Bourguiba, wounding 15 officers and two teenagers in the first such attack in the city since 2015.

The bomber, from the eastern region of Mahdia, was aged 30 and had a degree in business English, said prosecution spokesman Sofiene Sliti, who also represents the country's anti-terrorism unit.

Guebla did not have a job related to her studies, but sometimes worked as a shepherdess to help her family, according to Tunisian media.

Eight years since a revolution that toppled longtime dictator Zine El Abidine Ben Ali, Tunisia's economy is stagnant and around a third of young graduates are unemployed.

Authorities had not previously identified Guebla as a potential extremist, Sliti told AFP.

The prosecution spokesman said there had not yet been any arrests in connection with Monday's attack.

Authorities said nobody was seriously injured in the explosion.

Tunis returned to normal on Tuesday apart from a reinforced police presence around the blast site, on a major artery and close to the North African country's interior ministry and French embassy.

Municipal workers had used high-pressure water hoses to clean the area, where tourists were walking again and cafes had re-opened.

Since 2011, jihadists have been waging a campaign of attacks targeting Tunisian security forces, particularly in the mountainous region near the Algerian border.

But Monday's attack was the first in Tunis since November 2015, when a suicide bombing killed 12 security agents on a bus for presidential guards, a few hundred metres (yards) from the site of the latest attack.

The 2015 attack was claimed by the Islamic State jihadist group.

In June 2015, a student went on a shooting rampage in the coastal resort of Sousse and killed 38 people, including 30 Britons.

An attack in March that year on the Bardo National Museum in Tunis left 22 people dead, all but one of them foreign tourists.

Those attacks, also claimed by IS, devastated Tunisia's crucial tourism sector, which made up seven percent of gross domestic product.

The country has been under a state of emergency since the November 2015 bus attack.

The state of emergency was extended this month until November 6, amid a tense political climate ahead of legislative and presidential elections planned for next year.

The political prostitute journalist who recorded Akufo-Addo ...
38 minutes ago