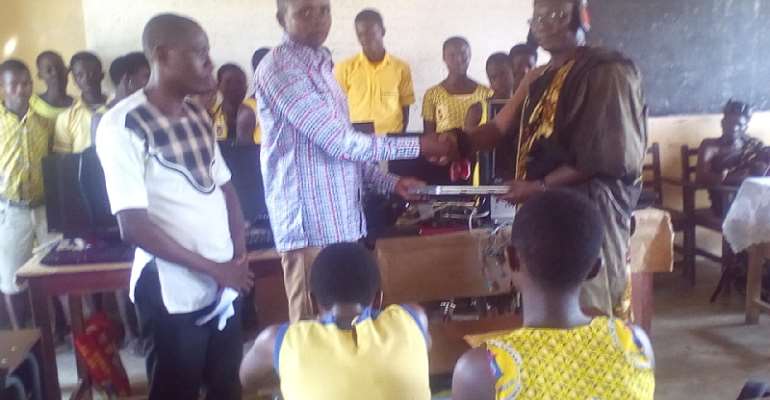 A United Kingdom based International Revivalist, Rev. Ebenezer Anaman has donated set of computers with accessories running into thousands of Ghana Cedis to Ekumfi Adansi Methodist Basic School in the Ekumfi District of the Central Region to enhance effective teaching and learning of ICT in the school.

"We are in the computer world. Nowadays, everything is done by computer, students of Ekumfi Adansi Methodist Basic School cannot be left out and ought to be abreast with the global trend.

I will do everything within my power to ensure that a fully furnished ICT Laboratory Center is handed over to school.

I believe this the best legacy we as citizens of this vicinity can leave for our generations to come. Am praying for early completion of the Community Center with ICT center attached so that students can use it as a resource center after school instead of roaming about aimlessly.

Let me assure you that I will attend to the needs of the School especially with the Kindergarten block. Education is the key for development. I will endeavour to make education accessible to every child of school going age in Ekumfi Adansi and its surrounding communities "

Revered Ebenezer Anaman who has been enstooled as Nkosohene (Development Chief) of Ekumfi Adansi and its environs stressed the need for the�� students to take their studies seriously.

He expressed his gratefulness to Foster Denovo Limited, a Company based in the United Kingdom for supporting him with the computers.

" I must express my gratitude to Foster Denovo Limited, UK for this kind gesture. This support will go a long way to assist the students to acquire computer skills and knowledge.

It will also give the students the opportunity to be abreast with the global world. Foster Denovo Limited UK has put smiles on the faces of the students and would always be grateful to them"

He tasked the School authorities to take proper care of the computers stressing the need their safety.

The Headteacher of Ekumfi Adansi Methodist Basic School, Mr. Richard Boison-Odoom receiving the computers lauded Revered Ebenezer Anaman (Nana Anamoah I) for his selfless support towards educational development not only for the school but for all the communities in Ekumfi District.

" Teachers, Parents and the entire student body of Ekumfi Adansi Methodist Basic School will continually be grateful to our Nkosohene ( Development Chief), Nana Anamoah I known in private life as Revered Ebenezer Anaman and his partners for having us at heart.

This computers has come at the right time to enhance effective teaching and learning of ICT in the school. It's worthy to note that Rev. Ebenezer Anaman has fulfilled a promise he made last year when he assured us more computer soon after donating sets of computers with accessories to the school.

One of our major challenges as teachers here is the resources for effective teaching and learning of ICT. At a point in time, the ICT teacher and my humble self had to bring our personal Laptops to teach the students.

Am extremely happy and hopeful that these computers would close the gap that was created by lack of computers thus enabling the students to catch up topics in the syllabus.

We are equally grateful to you for personally constructing an ICT laboratory Center which is about 45% Complete. This will facilitate computer studies among the students. We know for sure that it would soon be completed for us "

Nananom made a good choice by choosing you as Nkosohene (Development Chief) for the community, we pray for wisdom from God Almighty to give you the strength to enable you to support education development in this vicinity"

Mr. Robert Boison-Odoom on behalf of the 455 pupils of the School assured that the computers would be put into good use to serve its purpose.

Nana Osaberima Okofo Okatakyi Essel Ababio III, an Elder of the Ekumfi Adansi Community advised the students especially the Girls against early sex which leads to teenage pregnancies and school drop -out but to stick to their books adding they should strive hard to attain height in the educational ladder.

He assured the students that Nananom had created conducive environment for them so they should take advantage to better their lots.

Present was Assembly Member for Ekumfi Adansi Electoral Area, Mr. Nelson Amissah and some Opinion Leaders in the area.