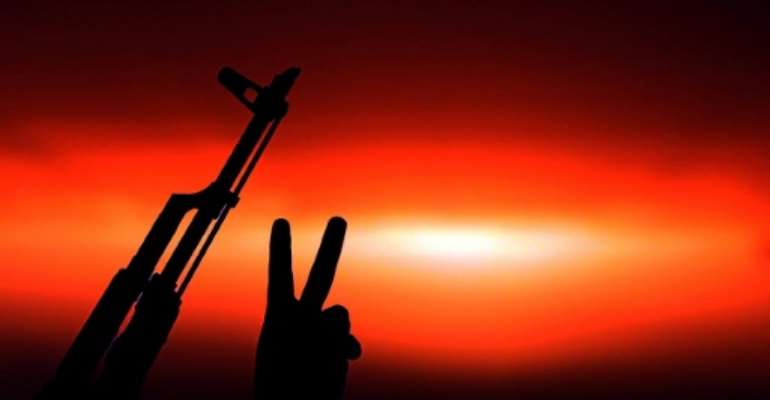 Neglected by rival authorities in Tripoli and the country's east, Libya's southern desert has increasingly become a hideout for foreign rebel groups that stand accused of stoking growing insecurity.

"Kidnapping, theft and banditry have multiplied" in the region, said Ali Akri Molia, commander of a unit responsible for protecting oil installations in the Oubari area of southern Libya.

He and others blame rebel groups from neighbouring Chad for much of the insecurity.

Mired in chaos since the fall of dictator Moamer Kadhafi in 2011, two entities now vie for control over Libya -- the Tripoli-based Government of National Accord, and a parallel body in the east.

The rebel factions have established rear bases in Libya and profit from trafficking and other illicit activities to finance insurgencies back home.

The groups benefit from the support of tribal communities, criss-crossing a landscape where dunes are sometimes the only identifying features.

Often on horseback, they ignore borders that for long stretches remain nothing more than imaginary lines in the sand.

The Tubu people are among those that straddle Libya and Chad. Some of them are involved in smuggling and illegal migration, according to experts.

"Most Chadian and Sudanese opposition armed groups have been seeking to increase their presence in Libya in the pursuit of profit," said a recent report by a UN group of experts on Libya.

Mohammed Emdaouar, a southern Libya lawmaker, said the groups operate in a vast area extending from Koufra near Chad to the Marzuq basin, more than 400 kilometres (250 miles) from the border.

The rebels "occupy homes and have their cars. Nobody can touch them", he lamented.

Commander Molia cited the kidnapping in mid-October of members of a tribe near the Oum al-Araneb region.

The captives were freed from the clutches of Chadian rebels by local armed groups, but 10 Libyan fighters were killed in the rescue operation, said Molia.

The commander complained that his forces get no support from the GNA or the eastern administration, leaving them ill-equipped to battle insecurity.

One of the freed hostages, Mohammed Ibrahim Mohammed, told AFP the Chadians claimed ransoms from families.

"We categorically deny (what) they accuse us of," said Kingabe Ogouzeimi de Tapol, leader of the armed wing of a group called the Salvation of the Republic.

In August, his group launched an offensive in Chad's far north, before retreating to shelter in southern Libya.

Another Chadian group present in Libya, the Union of Resistance Forces, also denied involvement and accused Libyan commanders of being behind the kidnappings.

"There are Chadians... who work for the Libyans, for the tribes," said spokesman Youssouf Hamid. He said any Chadians involved would not have acted on their own initiative.

The UN Mission in Libya has condemned rights violations by foreign armed groups and has urged "the Libyan authorities to take swift and effective measures to fight anarchy in the region".

On Wednesday the UN-backed government in Tripoli held a cabinet meeting focused on the country's south.

"What is happening in the south is very dangerous," said the GNA's deputy prime minister Abdessalam Kajman.

He urged "firmness" in tackling Chadian and Sudanese opposition "bandits".

Meanwhile, the LNA has ordered a military operation to fight "criminal gangs and the Chadian opposition who engage in kidnapping and extortion, deriving significant revenues that could finance terrorist activities", LNA spokesman Ahmed al-Mesmari told AFP.

A recent meeting in Chad's capital N'Djamena between Haftar and President Idriss Deby Itno falls within this military remit, he said.

But in reality Libya's vast south escapes the control of both the GNA and its rivals in the east, even if Haftar's self-styled LNA says that it has an on-the-ground presence.

"The southern territory is vast, difficult and... does not necessarily promise a very substantial political dividend," said Jalel Harchaoui, a Libya specialist at the University of Paris 8.

This discourages the main Libyan forces from intervening, he added.

But Harchaoui said Chad's government and former coloniser France are also worried that a jihadist presence could further unravel the Sahel region, which leaves them dependent on Haftar.

"Haftar is supposed to re-establish order in this vast territory," he said.

But while the strongman has "made many reassuring declarations, the reality (on the ground) remains worrying".