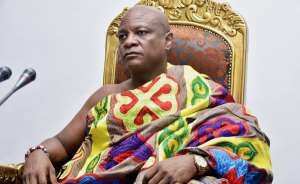 The President of the National House of Chiefs, Togbe Afede XIV, has indicated that he is not against the creation of new regions despite his public criticism of some of the government's processes leading to the creation of the new regions out of some existing ones.

According to him, his major concerns have been about how to ensure that that process is smooth and does not spark protests and conflicts in the end.

Speaking to Citi News’ Vivian Kai Lokko, he said some have sought to misinterpret his interest in the development as being against the government's plan to create new regions.

Togbe, who is also the Paramount Chief of the Asogli State in the Volta Region said he wants the entire Volta Region to appreciate the processes and the eventual creation of the proposed Oti Region out of the existing Volta Region.

“For the avoidance of doubt, let me state it categorically, Togbe is not against the creation of new regions. People should not divert attention from the truth of what I am looking at and claim I'm against the creation of new regions, no I am not against it, otherwise, I wouldn't have invited Dan Botwe myself to let him know the issues involved and how to carry all of Volta Along. Questions about the name, the boundary, the capital and the message that will go with it. I've tried to support a smooth process for the realization of the government's objective,” he said.

Togbe Afede XIV recently said the consultation process for the creation of the Oti Region out of the Volta Region was not exhaustive enough.

He said the consultation process needed to be “full, faithful and impartial,” in line with the constitution.

“You came to Ho. You left Dzodze in the south, Keta, Aflao, Denu, Anloga. All these places [left] out. Why would you do that? There is no question in my mind that the Commission of inquiry [needed to] extend its sittings to the southern sector.”

“A full inquiry, I believe would involve talking to even those who are against the process, but [the Commission] limited all the public hearings to the very areas where they said they had received petitions from,” Togbe Afede also said.

His criticism has seen some suggesting that he is against the creation of the new region but Togbe Afede said such perceptions are false.

Speaking on the Citi Breakfast Show on Thursday, Mr. Botwe said comments that seek to cast aspersions on the work of the Commission are unfair and shocking.

This was especially because the President of the National House of Chiefs had been engaged several times through the entire process, he added.

“This is about a description that the work by the group of eminent people is shoddy. He might have different views on some of the decisions being taken but to describe the work as shoddy, we take strong exception to that.”