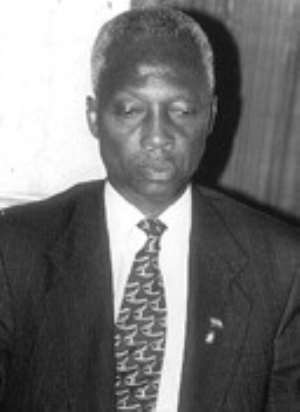 .... Bought for ¢500 million ... And sold for ¢275 million after only one year .... Kwasi Abeasi's Audi A6 had done only 1,000 kilometres .... The cruelest rape of the Ghanaian economy THE thieving and the corruption of the NPP Government are moving down from the political to the public officials level.

How else does one describe a scenario in which a one and half year old fully-loaded, leather upholstered Audi A6, with registration number GT 5436 U, purchased with the taxpayers money on 18th December 2003 at the cost of ¢505.6 million has been sold on directives from the Castle to Mr. Kwasi Abeasi, the NPP Chief Executive of the Ghana Investment Promotion Centre (GIPC) for ¢275 million – a whopping 46% discount, even though the STC assessed present market value was ¢325 million, itself bad enough Expert valuers contacted by Ghana Palaver have expressed amazement at the scale of depreciation, given the age and mileage of the vehicle..

At the time of valuation of the vehicle by the Intercity STC Coaches Ltd on 23rd June 2005, it had done only 1,022 kilometres. The STC valuation report on the vehicle is published elsewhere in this paper.

The authority to sell the car below the already questionable valued price by Intercity STC Ltd was communicated by the Office of the President on September 6, 2005 under the signature of Mr. C. A. Atiemo, Chief Director, for the Chief of Staff and Minister for Presidential Affairs.

Mr. Kwasi Abeasi was the Chief Executive of the Ghana Investment Promotion Centre for 3 ½ years only and left around June 2005 for the more lucrative job of the Chief Executive Officer for the African Business Roundtable based in South Africa. Investigations by the Ghana Palaver reveal that the Chief Executive used the Centre's 4WD vehicle most of the time while he had craftily parked the Audi A6 in his house expecting to buy it in a near-new state on leaving office, which he has.

"The Ghana Palaver" has learnt that Mr. Abeasi has not paid even one cedi yet for the car, and yet the car has been delivered to him and is in his custody in his house.

"The Ghana Palaver" has again also learnt that Mr. Kwesi Ahwoi, the former Chief Executive of the GIPC for 7 ½ years, was not sold even a bicycle of the Centre when his employment was curtailed “in line with public policy” by the NPP Government, according to the letter terminating his appointment and signed by Mr. Jake Obetsebi-Lamptey, then Minister of Presidential Affairs. Instead, he was prosecuted before the Fast Track High Court as the sixth accused person in the now infamous “Quality Grain Trial”. He was acquitted and discharged upon a submission of “no case to answer” at the close of the case for the prosecution.

Mr. Kwesi Ahwoi's two brothers, Ato and Kwamena Ahwoi, are former P/NDC Ministers and leading members of the NDC, while Mr. Kwesi Ahwoi himself is suspected to be a sympathizer of the party.

Following our “Going, Going, Gone” publication of last week in which we revealed the blatantly perverse manner in which the NPP Government has sold State Mercedes Benz cars to themselves for prices ranging from as ridiculously low as ¢5 million, we have been inundated with information about similar deals going on within the entire public service. At the centre of this rape of the economy is the Office of the Chief of Staff at the Presidency.

It will be recalled that when the NPP Government assumed office in 2001, they made a great hullabaloo about the fact that official vehicles being used by the departing NDC Ministers had been sold to them. President Kufuor ordered the Ministers to pay some extra amounts on the prices or return the vehicles, in the now infamous “pay or park” edict. The matter finally ended up in the courts and five years down the road, the matter is still in the courts.