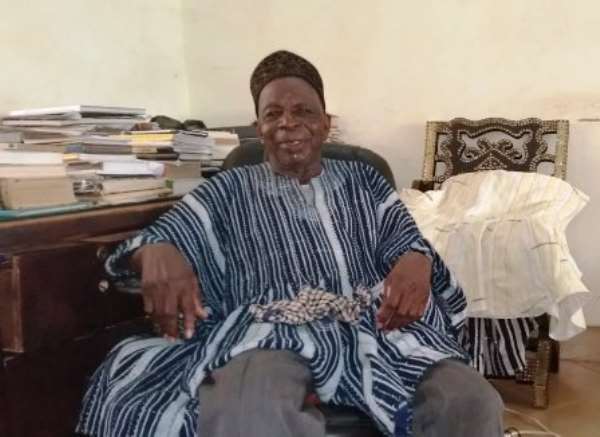 Kuoru Kuri-Buktie Limann IV, the Paramount Chief of Gwollu Traditional Area, has condemned formation of vigilante groups by political parties as unhealthy to economic growth and inimical to national development.

He has therefore called on political actors to focus their attention on improving roads, education, health and water systems, to improve living conditions of ordinary citizens, saying: 'we want peace and development and not vigilantism'.

The Chief who was speaking to journalists in Gwollu, the Sissila West District Capital in the Upper West Region, said formation of vigilante groups often disrupted law and order as the members without legal authority mostly unleash mayhem on innocent citizens.

Kuoru Limann IV call for peace and development in the Sissila District following an eruption of a brawl on Friday between two New Patriotic Party (NPP) factions over accusations of impropriety against the District Chief Executive (DCE, Mr Mohammed Zackaria Bakor) and Member of Parliament (MP, Mr Patrick Alhassan Adama) of the area.

'I am pleading with the two sections [of the NPP] to pass through the normal way to have things changed, you can't sit on your own and call for vigilante action, it's not good,' he said.

'We want good governance in the District to bring about progress and advancement,' he said and added: 'They should look at our roads, our water system, and our education system and see what they can do'.

The Chief said vigilante action retards social and economic progress, since when the District eventually gained 'notoriety' for being tagged 'troublesome or war-torn', it would drive away investors.

He recalled that when Former President Dr Hilla Limann, a native of Gwollu, was unlawfully removed from office the people did not fight, but resorted to peaceful redress through the 'normal way and today it's a changed situation'.

'You see it's not good for our District to be called a vigilante district, our ancestors were not fighting against each other, so it should not happen with the political parties that have come,' he said.

Kuoro Limann IV pledged to invite the two NPP groups for amicable settlement to pave way for peace and development to go on to improve lives of the people in the traditional area.

On Friday, some Constituency Executives and party elders of the NPP in Sissala West convened a press briefing on what they described as 'the sorry state of the NPP' in the Constituency.

Constituency Secretary and Spokesperson for the Executives, Mr Abdul Rauf Zini, told the press that the actions and inactions of the DCE and the MP were 'uncomplimentary and an affront,' to President Akufo-Addo's vision of growth and development of the country and the Party.

The Executives therefore called for the removal of the DCE from office and also demanded Party stalwarts to intervene to bring the MP to order, to allow him focus on his core responsibilities of serving the Constituency.

There was however, another counter press conference on Saturday by another NPP group who refuted the rafted allegations catalogued by the executives, and rather demanded the Party Executives in the Constituency take steps to bring unity within the Party.

Spokesperson for the group, Mr Karim Hudu Muah, said the Executives ought to make an attempt to reunite and reconcile the rank and file of the Party since sharp divisions emerged after their last Constituency and polling station elections.

'We were all together in 2016, but the time we were going to the Constituency elections, some names were deleted,' Mr Tomy Salifu, Former Polling Station Executive Chairman for Sorbella Polling Station 'B' told the Ghana News Agency: 'Look! My welding shop was destroyed, but we are all one and we are ready for peace'.

Take NPP’s money but don’t vote for them – Naana Jane to Asi...
45 minutes ago