By Reinnier Kaze with Amaury Hauchard in Libreville
Cameroon 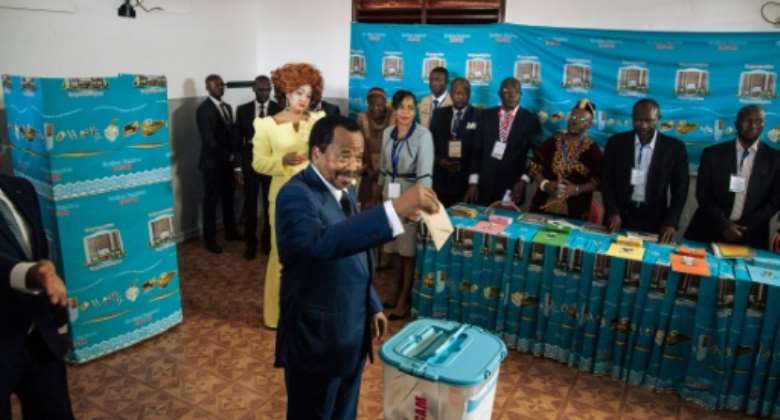 Biya, nicknamed 'The Sphinx', has ruled Cameroon since 1982. By ALEXIS HUGUET (AFP/File)

Cameroon's long-serving ruler Paul Biya was Monday headed for a crushing win following a controversial presidential election, as the government tightened security in the capital and gunfire erupted in the country's volatile Anglophone region.

The Constitutional Council, dominated by Biya loyalists, on Monday started releasing the results of the October 7 ballot.

It said the 85-year-old, who has ruled the country since 1982, got a landslide victory in six of the country's 10 regions, with a seventh going to the opposition.

The seven regions include francophone Cameroon's two English-speaking regions, where a separatist movement has unleashed a brutal government crackdown.

Voting was disrupted in the anglophone areas, where turnout was below five percent, according to the International Crisis Group think tank.

Witnesses on Monday told AFP of gunfire during the morning in Buea, capital of the English-speaking Southwest region, which has been rocked by violence for months.

The Constitutional Council had 15 days after the vote to weigh up objections filed concerning the election. It rejected all 18 complaints. The final results can no longer be challenged.

AFP journalists reported tight security around the main post office in the capital Yaounde after calls on social media for a protest rally against the results.

Anti-riot police trucks and security forces were deployed across the area.

Voting was disrupted in the anglophone areas, where turnout was below five percent, according to the International Crisis Group think tank. By MARCO LONGARI (AFP/File)

Authorities on Sunday had banned an opposition march in the commercial capital Douala called to denounce the "shameful and massive fraud" in the election. About 30 people were arrested on the spot, AFP journalists reported.

Maurice Kamto, who pronounced himself the winner of the vote before even the first results were announced -- leading the government to brand him an outlaw -- has alleged that six of the 11 members of the Constitutional Council were biased in Biya's favour.

Kamto was Monday declared the winner in the Littoral province -- the only one not so far won by Biya -- where he got 38.6 percent of the vote.

Kamto has also called for the vote to be annulled in seven of the country's 10 regions, citing "multiple irregularities, serious cases of fraud and multiple violations of the law".

'We heard a lot of gunshots '

In English-speaking Buea, a resident said shooting took place in the Mile16 and Great Soppo districts of the city.

"We heard a lot of gunshots this morning," another resident said.

But a security source told AFP there had been no clashes in Buea on Monday.

The army has been deployed in the Southwest and the other Anglophone region, the Northwest, to hunt down the scattered groups of separatists who seek the independence of these territories.

The historic opposition party based in the west, the Social Democratic Front, has long stood against Biya.

Security has been tightened in many areas. By ALEXIS HUGUET (AFP/File)

The party's failure to demand outright independence has roused calls of "treason" among hardliners.

Biya became prime minister in 1975, but precisely how he was anointed to succeed Cameroon's founding president Ahmadou Ahidjo in November 1982 remains a mystery.

Unlike more fiery and flamboyant peers in the club of long-standing African leaders, Biya -- who is nicknamed "The Sphinx" -- is a quiet autocrat.

In a rare moment of candour, he once warned of his sweeping powers telling a Cameroonian journalist in 1986: "Just a little shake of my head and you'll be reduced to nothing."

Five die in accident on Techiman –Tuobodom highway
23 minutes ago