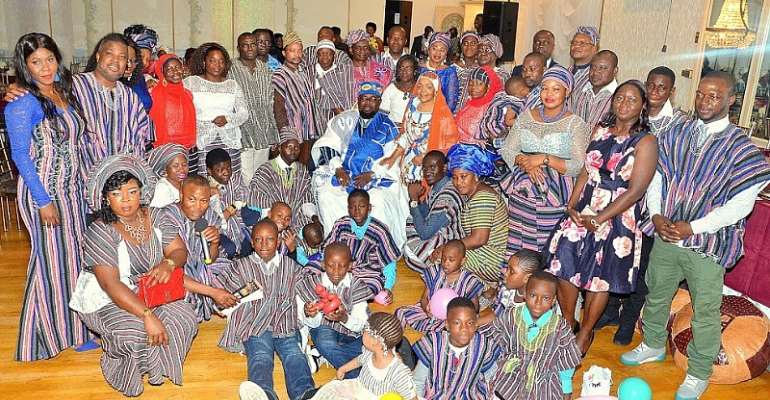 It was a flamboyant and traditionally glorified occasion on Saturday October 13, 2018, when a conglomerate of migrants, with roots from the Pusiga District in Northeastern sector of Ghana, but currently residing in the Tri-State (NY, NJ & CT) catchment area inaugurated their maiden apolitical, sociocultural benevolent association proudly christened as the Association of Pusiga People in the USA (APPUSA). The event took place at the plush La Fortuna Catering House in Fairview, NJ.

Verily, birds of the same feathers could flock together but with higher propensity of heading to divergent destinations. It therefore becomes adorable, satisfying and unifying for one to witness these “birds” flying with common goals and one voice to their terminal point. Such is the story and the spirit as exhibited by the good people of Pusiga who forms membership of APPUSA. With one accord, they have united to form this association for self-help and to also confront the numerous developmental deficits bedeviling their kinsmen back home.

As an ardent admirer of tradition—African tradition for that matter— the writer was highly awestruck at the exposition of customary artifacts at every facet of the occasion. Upon entering the ballroom, one could notice the ambience replicating the northern culture as evidenced by the decorations with indigenous regalia and paraphernalia. A royal throne for the Chief and a stool for the Queen-mother was enough to show reverence and seriousness of the event. About 90% of participants, especially the men wore the traditional hand-woven fugu smocks—a signature outfit for the people of the northern lineage in Ghana. The ladies were gorgeous in their dresses and were simply the cynosures of the night! Their beautiful designs from their respective crafty seamstresses, with the same material as their men, placed them on the “highly inflammable” classification to the extent that the fire department was alerted to be on standby duty. In fact, it took me a while to understand the bizarre situation where men in the ballroom were seen talking with their “eyes” as they stared sternly at the ladies with their “mouths”. That was the magnitude of the perplexity that emanated from the masculine corner! If I were a doctor, I would have diagnosed “Transient Visuomaniac Disorder” secondary to excessive feminine admiration.

The local Bissa Chief in New Jersey—Alhaji Ibrahim Adams and his entourage were ushered into the hall by the versatile and prolific cultural group led by international agile dancer—Yawuza Alhassan supported by Ms. Mariama Gariba, Buhari Naibi, Christian Kutte, Aaron Paige and this author. Their sterling performances were enough to relieve pressure off everyone’s buttocks each time they displayed. After the Ghana and US National Anthems, prayers were offered: Christian, Islamic and then the Traditional (libation). What caught my attention the most was the unique and surreal libation to invoke the spirits of the ancestors and the “supreme-being” performed by Mr. Augustin Ayela. He invoked, in the Gurma language, and later poured a concoction from a yellowish calabash on a soil and added liquor. He would have poured the offering onto the ground directly if it were being done outdoors, but a collection of sand in a bag indoors was enough to represent the earth (where it is believed our ancestors dwell). There went the tympanic sound squeezed from Dondo—a dumb-bell shaped drum played from the armpit of Buhari to ostensibly appease the gods at the end of the libation. It was indeed a scene to gloat over.

In his remark, the Chairman of the ceremony Mr. John Mbugri encouraged the gathering not to relent on their decision to unite and support their people back home even in the wake of staring adversities. The first President of the association, the magnificent Ms. Hamdiyah Abdulai Enusah was ubiquitous that night. In elation, she expressed gratitude to executives and members for their collaboration towards a successful launch. She stated that despite their small numerical size, “we have managed to assist the district by donating 127,000 boxes of medical gloves” to medical staff for efficient healthcare delivery and had equally undertaken a number of projects in sports and other areas. She called for members to propagate the “birth” of APPUSA to other indigenes in the country.

It was really fascinating to notice the presence of leaders of other ethnic associations in New York and New Jersey who came to grace the occasion. The United Volta Association (UVA), Ga Association, Yankasa Kuo, the National Council of Ghanaian Associations (NCOGA) representatives and others came with feeding bottles, Enfamil and diapers in solidarity—a gesture that epitomized the peaceful inter-religious and ethnic coexistence amongst Ghanaians.

After the swearing-in of current executives, Mrs. Barikisu Sanni thanked the audience and Mr. Hillary Assibi offered the closing prayer, which rather seemed like the opening prayer as the D.J kept the people digging the dance floor.

The least but most importantly, this report will be inconclusive without my heartfelt compliment to the seasoned caterers who prepared those sumptuous local delicacies. Usually, I get pampered to eat. But for me to voluntarily consume five plates of food at a sitting, was attestation of the excellent culinary skills of “Hajia Sukena”! Honestly, I ate the best traditional “waakye” (rice & beans) ever cooked in America that night! 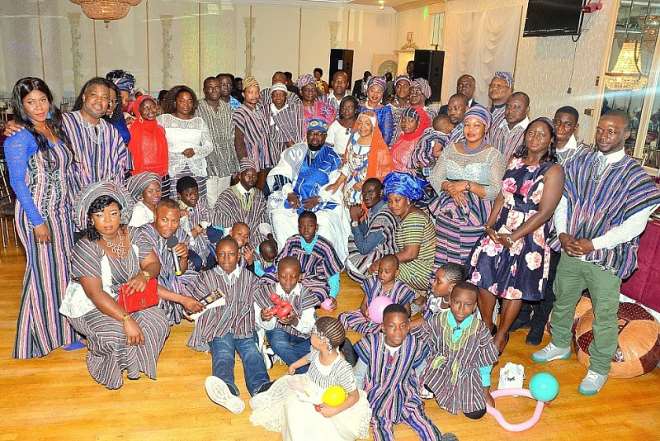 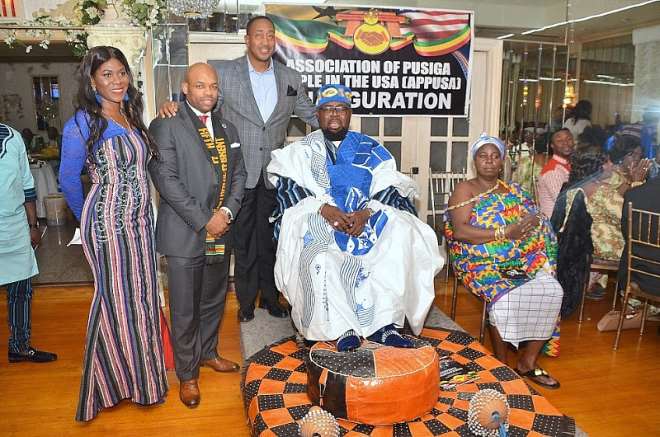 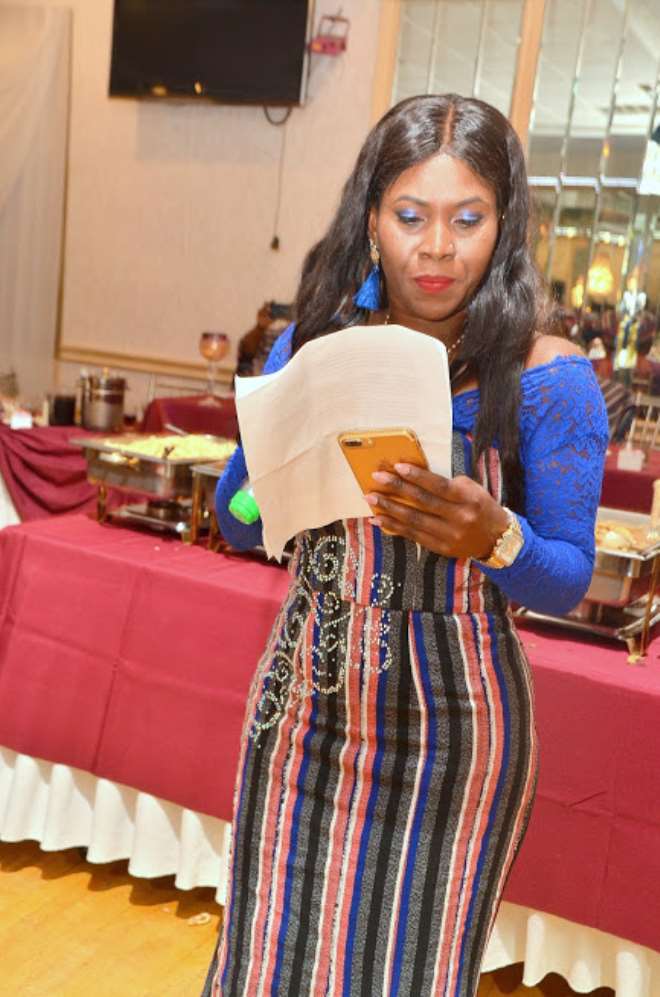 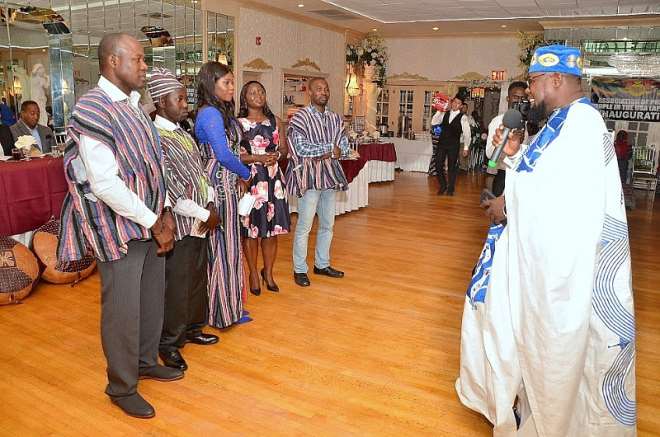 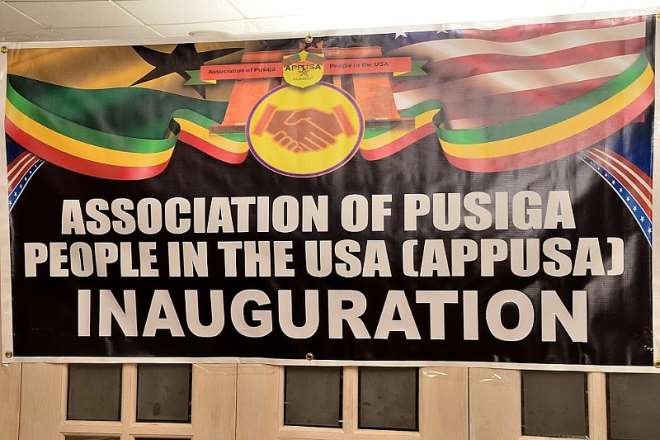 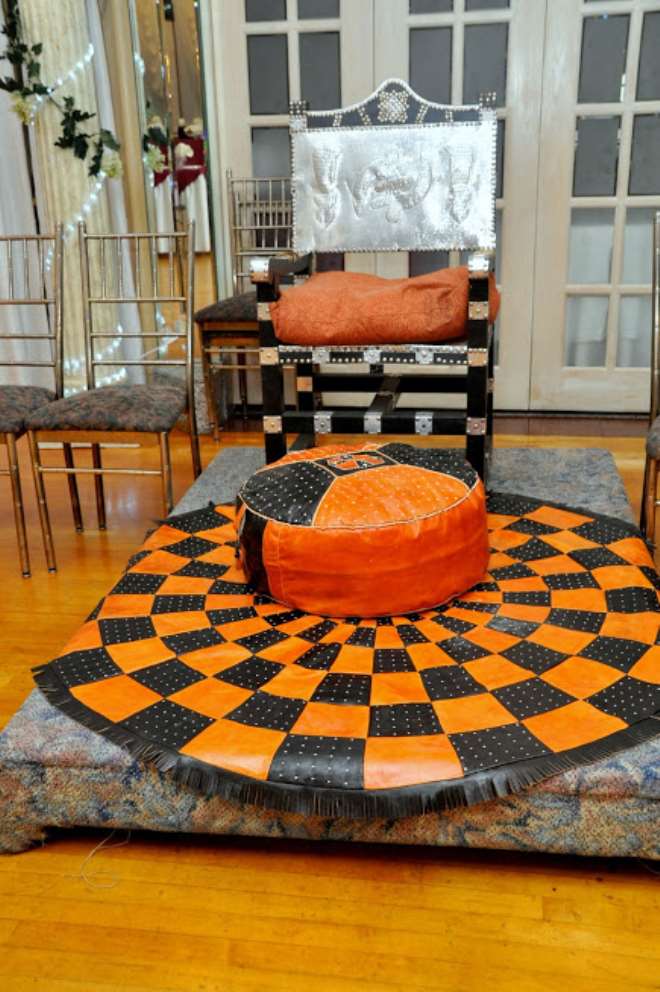 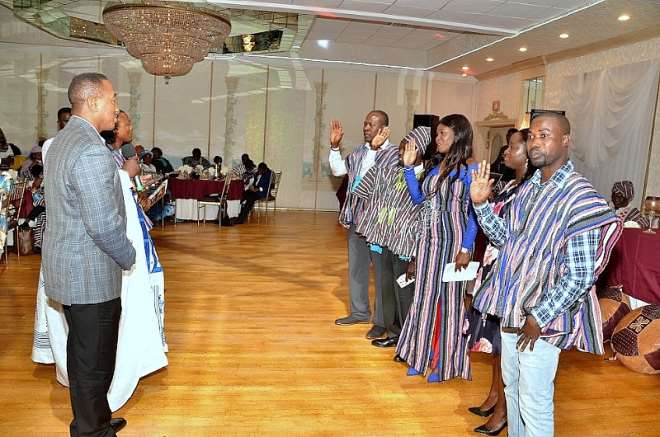 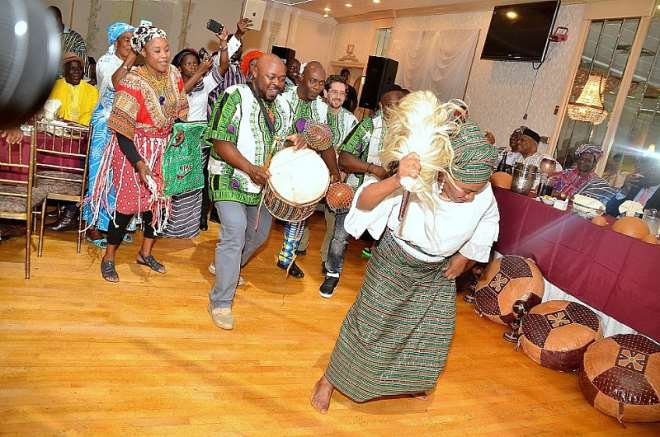