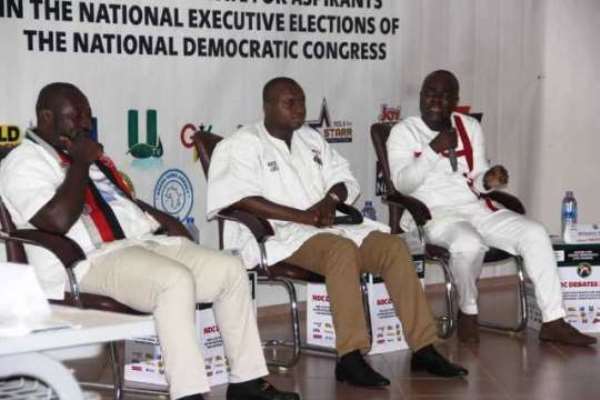 The National Democratic Congress (NDC) National Youth Organiser hopefuls on Thursday called for the strengthening of the youth base of the Party.

The NDC National Youth aspirants, which included; Mr Wonder Madilo, Mr George Opare Addo and Mr Yaw Brogya Genfi, made the call in Accra, during pre-election debate for aspirants in the 2018 national Executive Elections of the NDC.

Organiser aspirants, strengthening the youth base of the party would go a long way to deliver victory to the Party in the 2020 General Elections.

The debate was organised by the Centre for Social Democracy (CDS) Ghana in collaboration with the NDC and the Friedrich-Ebert-Stiftung (FES) Ghana.

The initiative seeks to offer voters the opportunity to hold winning candidates accountable to statements and promises them made during campaigns; and also create a level playing field for aspirants to articulate their policies and reach out to voters.

The maiden debate was held for aspirants of the National Women's Organiser and National Youth Organiser slots.

However, that of other national positions lined up for the next session is slated for November 1 and 2, 2018.

Mr Opare Addo said the NDC had core values; and as such, there was the need to inculcate accountability and probity principles in the youth and underscored the need to reform its youth front in respect to, giving young people the opportunity to serve in various roles.

He said one major challenge the NDC faced was the problem with middle and upper class; where over the years the Party had been regarded as a grassroots Party and yet nobody wanted to remain at the grassroots.

Mr Opare Addo noted that when voted into office, he would re-brand the NDC by giving the youth wing a new face to attract young people who would engage in national debates especially in student politics; to drive the ideologies of the NDC party.

Mr Madilo on his part said the youth wing needed a proper database system to help formulate policies that would provide sustainable jobs for the youth and if voted into office, he would rejuvenate every cadre front with an objective of mobilising people to help the Party to attain more votes.

He said again, NDC's Tertiary Education Institution Network (TEIN) must have a constitution that would drive and fit into the ideologies of the Party.

Mr Brogya Genfi said, he envisioned a strong youth wing which would be well positioned to become an effective election tool for the 2020 polls and he would restructure the youth wing and build their strength from the branch to the national levels.

He mentioned a youth manifesto which would be extracted from the main Party manifesto to help reach out to people in their institutions to promote the vision the NDC Party had for the youth.

'As an upgrade document, young people will be interested in accessing it and getting to understand what the NDC stands for; this will be the best strategy to get young people to join the NDC', he added

Mr Lee Ocran, a Member of the NDC Debate Advisory Board said globally, pre-election debates were becoming an integral part of democracies as they contributed to democratic culture in diverse ways.

He said, the aspirants have had the opportunity to speak to issues and outline how they intended to address them, instead of engaging in personal attacks.

Place Rawlings on positive side of Ghana’s political history...
13 minutes ago