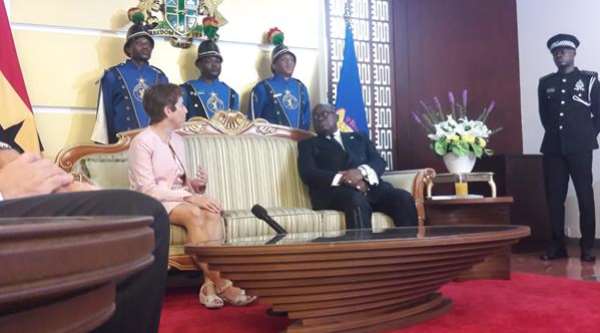 The letter of credence was presented to the president H.E Nana Addo Dankwa Akufo-Addo at the jubilee house in Accra.

The European Union has a long standing partnership with Ghana under the ACP-EU Cotonou agreement.

Over the last 40 years, both countries shared a broad common agenda to promote peace and security, regional integration, democracy, rule of law and human rights as well as to tackle global challenges such as climate change.

The European Union has also been a major provider of development aid to Ghana and to the African continent in general, and has supported Ghana's development priorities with substantial financial assistance over the years.

Touching on the president agenda "Ghana Beyond Aid ", it stated that, the EU is changing the focus of its relations with Africa from a "donor receiver" relationship to a partnership based on common interests and values Which the president of EU, President juncker called an alliance for sustainable investment and job.

"EU wants to bring more private investment to Africa, and will mobilize traditional and innovative financial instruments to work directly with the private sector to provide the infrastructure and the solid manufacturing sector that Africa needs to create jobs for its young people "the released said.

It added that “I have no doubt, Your Excellency, that Ghana will be a key partner to implement this ambitious plan. Ghana has recently experienced strong growth and developed its economy, becoming a lower middle income country and improving the well-being and prosperity of its people.”

The release said Ghana had great assets to become a privileged destination for private investment as it was politically stable due to the commitment to democracy and rule of law by successive governments, saying, it had natural resources and fertile land, young and dynamic population as well as government with a focus on development and on creating a conducive environment for business.

“And let us not forget that Ghana also benefits from the Economic Partnership Agreement that allows Ghanaian companies to export to the EU free from duties and quotas and this can be a further incentive for investors to choose Ghana as a hub for their manufacturing activities in the Region.”

It noted that Ghana could become a driving force and a leader for the development of the African Continent, adding that the EU was looking forward to working with Ghana to make this happen and support her in her efforts to consolidate the middle income status.

“The partnership between Ghana and the EU is not only about promoting economic growth but also sustainable economic development,” it said.

“We are both committed to fighting against Climate Change and implementing the Paris Agreement. We are both determined to achieve the Sustainable Development Goals – with your personal involvement as co-chair of the group of SDG Advocates – and the EU will support Ghana by integrating the Government's SDG objectives in our budget support programme.”

The EU, it said, was working with Ghana to issue licences to make sure that timber exported to the EU only came from sustainable sources as well as fight against illegal fishing and depletion of ocean resources.

“To maximise the benefits from economic growth, good governance is paramount. I would like to commend the Government's engagement to improve public finance management and tackle the problem of corruption,” the release said.

It commended Ghana for the creation of the Office of the Special Prosecutor and the presentation of the Right to Information Bill before Parliament, saying they were promising developments and the EU was following their progress closely.

The release also noted that, "no sustainable and sustained development is possible without building up education and skills that multiply the opportunities for young people to access qualified jobs".