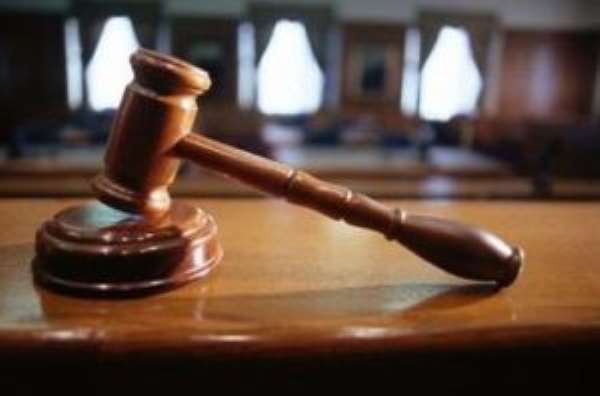 Two young men have been fined GH¢1,800 each or in default, serve 12 months in prison with hard labour for stealing four bundles of aluminium high tension cables valued GHC15,000 at Dadieso in the Western Region.

The convicts, Ralph Obbi, a farmer and Abdalah Nasir, a blacksmith, were charged with conspiracy to commit crime, stealing and dishonestly receiving.

Their accomplice, Kwesi Oppong, a cobbler, who conspired with Obbi and Abdalah to commit the offence was also ordered to sign a bond to be of good behaviour for 12 months.

Oppong will pay a fine of GH¢2,000.00 or in default nine months in prison with hard labour if he fails to comply with the bond.

The Court at the end of the trial, found the three guilty of the charge of conspiracy to commit crime, stealing and dishonestly receiving.

Detective Sergeant Joseph Kwadwo Agyare, the prosecutor, told the Enchi District Magistrate court, presided over by Mr. Eric Baah Boateng that a month ago, Obbi and Oppong planned to sell the high tension cables that were packed behind Obbi’s house.

He said Oppong informed Abdalah alias 'Grow' about the deal of which he expressed interest.

The prosecution said, on June 1, 2018, at about 1:00 am, Abdalah picked Oppong on his motorbike from Dadieso to Kwabenakrom where they met Obbi.

Detective Sgt. Agyare indicated that after negotiations over the price of the cables, Obbi and Abdalah settled on GH¢1,000.

He said Abdalah promised to pay the money later and they all agreed and went to pack the stolen items on a tricycle and sent them to Abdalah’s house at Nyame Adomkrom, a suburb of Dadieso.

According to Detective Sgt. Agyare, they later conveyed the cables to the Dadieso Kumasi bus terminal to enable them to transport them to Kumasi for sale.

On June 3, he said the Dadieso Police had a tip-off that the remaining high tension cables to be used for rural electrification project for Suaman District had been stolen.

The police began a search around the area and on reaching the Dadieso Kumasi bus terminal they found four coiled high tension cables wrapped in fertilizer sacks, which they conveyed to the Dadieso Police station for investigation.

Obbi was then arrested, but he denied any knowledge of the crime and rather mentioned Oppong and Abdalah as the culprits.

He said Oppong and Abdalah were arrested.