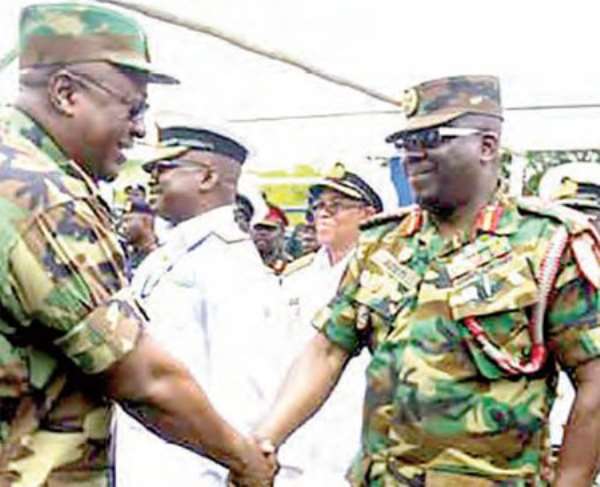 The Military High Command has cracked the whip on Major General Sampson Kudjo Adeti, who virtually converted his official residence at Burma Camp into the campaign office of the National Democratic Congress (NDC).

The man who was recently appointed to head the former President John Mahama's campaign security detail was booted out of his Burma Camp accommodation, having allegedly breached military rules.

The sanction is in response to the retired general's partisan activities, which are inconsistent with military standards since political party activities in military installations are barred and those in default face established consequences as meted out to Sampson Adeti, former Chief Staff Officer at the General Headquarters, Burma Camp.

He is said to have overstayed his welcome, as he was expected to vacate his official residence upon retirement in August.

It was his partisan activities which caught the eyes of observers and subsequently the Military High Command, which triggered the marching-off the barracks orders, DAILY GUIDE gathered.

His Juba Villas residence has been allocated to the Chief Staff Officer of the Navy Headquarters, the paper has learnt.

The retired general, after his appointment by the former President, hosted National Democratic Congress (NDC) vehicles at Burma Camp, with attendant siren blaring to the discomfort of other soldiers.

Adeti, according to Burma Camp sources, called the shot during the Mahama regime and was penned down as potential Army Commander if the NDC had retained power in December 2016.

The administrative blunder breached military standards since soldiers should be apolitical and so the NDC logo-embossed vehicles driving in and out of the barracks attracted the attention of soldiers and civilians living within the confines of the defence headquarters of the country, which of course is a security zone.

Following the breaking of the story regarding the anomalies, the Military High Command was said to have been startled and with military precision it immediately swung into action to determine the authenticity of the news story.

The action it took a few days ago therefore suggested that indeed the retired two-star general was engaged in activities in breach of military standards.

Maj Gen Adeti, a darling boy of the former political regime, was elevated from his then rank of Brigadier to Major General even at the peak of an investigation into his alleged stealing of a vehicle donated by the Bank of Ghana (BoG) to the Southern Command of the Ghana Army of which he was General Officer Commanding (GOC).

Many wondered at the time why the promotion could not await the outcome of the summary investigation being undertaken by Brigadier RY Odoi; little did such persons know that as a favoured officer of the regime, he was infallible, hence the elevation in outright disregard of the recommendations of the report on the investigations which was eventually released to appropriate quarters.

The investigation indicted Adeti but his Commander in Chief, John Mahama, virtually saluted him and got him promoted to 2-Star General with the albatross hanging on his neck.

The then Chief of the Army Staff, Maj Gen R. K. Opoku-Adusei, who ordered a summary investigation into the conduct of Gen Adeti was retired from the military soon after the investigation.

Brig Odoi was also transferred out of the country to the US where he is attached to the Ghana Mission to the UN.

The story about Gen Adeti's appointment as published by DAILY GUIDE last week attracted a swift response from the former president who stated that the man he had hired is a retired officer.

Mr Mahama did not, however, address the issue of Gen Adeti hosting NDC vehicles within a restricted zone.

The reaction only proved that Gen Adeti has been hired by the former Commander-In-Chief who obviously holds him in high esteem.

He described him as a 'distinguished' retired officer and accused the media of making 'misleading impression' about him.