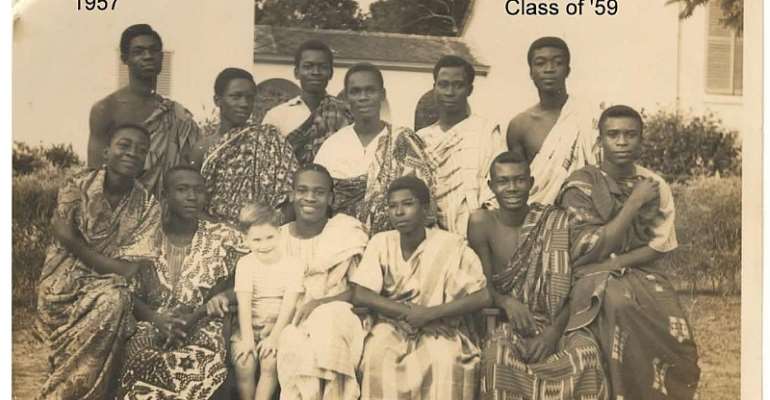 Whilst we must stoically accept the passing of Bra Ate, because we knew that he had been unwell for some time, his death nevertheless leaves a deep void. The entire family and his many friends will continue to mourn the death of this man of many parts who played different roles in their lives.

Bra Ate was an accomplished technocrat, an engineer who returned to banking, a man with a thirst for knowledge, a loyal friend and mentor to most, and perhaps the most dependable person who was selfless in his service to all who were close to him.

I remember him leading the pack of the young cousins who accompanied Mother, our aunt Mrs Ofosu Amaah to the Mould household at James Town for their lunch break and then he disappeared for quite a while – to senior school and then on to Achimota School.

Bra Ate was one of the youngest, but also one of the brainer ones taking Physics, Maths and Maths, in the Engineering Class and he went on the KNUST to complete a degree in Engineering. He then went on to work for several years with the Railways in Takoradi.

A change in the school year meant that Bra Ate like most of his mates spent 9 months working before University. He spent the time working for Barclays Bank, so it was not surprising that he returned to banking. He was one of the pioneers of the Development Finance Unit that Ghana Commercial bank had set up to fund longer term industrial projects. He loved his job and introduced many innovations, he found solutions to problems drawing from his training as an engineer. He approached his work with dedication, diligence and dutifully as he approached most serious tasks and despite the small politics of the state sector that resulted in being passed over for a deserved position in London, his rise to the position of executive director at retirement was meritorious. His was an exemplary career full of integrity and with no whiff of scandal.

Bra Ate believed in lifelong learning, and he himself never stopped; he undertook a Master’s in Management at the Arthur D. Little School in Boston, he was not satisfied with that and went on to attain another MBA at the Harvard affiliated Iran Centre for Management Studies a more technologically focussed programme before the Iranian Revolution. He just loved information and facts, even the most inconsequential, sharing these with whoever would listen, and because I had studied management and had met him at the bank in 1971, he engaged me in many discussions. He introduced me to PERT, a new tool in project evaluation, helped me with understanding feasibility studies and project financing and I in turn tried to impress him with new-fangled trends in psychology entering management and furnished him with the books of Edward de Bono on creativity in problem solving and the works of Malcolm Caldwell.

As children, Paatii and I always looked forward to his coming back for the holidays at Karl Villa, Adedanikpo where he would introduce us to his many friends and classmates and at the time I liked to think that he took a special interest in me and my education because he always asked about how I was doing in school.

In 1960 he gave me a pep talk before my interview and later in the year Bra Ate, who was then in 6th Form and another cousin King Ghartey, welcomed me to Guggisberg House. I like to think that I survived that first year of secondary school, what with my battles with illnesses and hospitalisation, because of the caring and protective environment that he created for me. I know that there were times that I took advantage of this protectiveness but ever the loyal older brother, he defended me through the many scrapes that I got involved and my mind goes back to a event in the common room meeting that he stood up for me when I had concluded that my misdemeanour was beyond defence. When I think back now, I realise that having someone in my corner then made me thrive and having someone who could talk straight to me helped me change some of the bad attitudes that I had picked up as a defence mechanism.

But then, Chico Ray though small in stature must have gone through the same issues that I encountered. But his small size indeed made him adaptable and more manoeuvrable in the hockey that he loved and played, it became an advantage making him less threatening to his friends and the younger ones who he took under his wings and though by far our senior he spent a lot of time amongst the Form One boys. He could easily be mistaken for one of them, he adapted effortlessly to blend in with the younger generation and my mind again goes back to a play at Achimota School in which he was referred to as a 20 year old teenager!!!.

I benefitted first hand from his mentoring and coaching, he continued to act as a guardian long after he had left Achimota and since I gravitated towards him because of his welcoming disposition. It meant that just as he was insistent in asking about my academic progress in school, and I was not doing well at the best of times, that gave me the opportunity to talk through my difficulties with him and what i really wanted to do. He made it a point to accompany me for my O level results, much against my wishes, but he hid his disappointment well, and ever the practical person ,called crisis meeting of sorts with his good friends Joel Hyde and Edwin Opoku to consider my options.

I continued to look up to him and indeed considered him as one of my heroes because of how adaptable he was and how caring and sharing he was with what he had and how quick he was to help those in need and so it was to him I turned for discussion when I decided that I was getting out of Ghana and he did assist very much with helping to crystallise my views on what I wanted to do with the rest of my life.

It was in his role as a dependable member of the family that he excelled most, Bra Ate was forever on hand to accompany people to places, to ferry his aunts to engagements, he was a frequent visitor to most of them and ever the most approachable of our older cousins, he kept an open and hospitable house.

There was fun side to him as well as the serious side. Ate was candid without welcome being brash, he spoke a lot about things and his integrity shone through in all that he did.

He always kept an open house for one and all, his house at Kaneshie was a place that we gravitated to during the early 70s – we were all very welcome visitors and later when he moved on to the flats near the Ako Adjei junction. The traffic continued during his extended bachelor years as he got married much later than most of his friends, to Julie his love, who predeceased him. That did not curb his selfless nature of making himself available to all family and his many friends.

Our ritual in recent years was that on 24thFebruary every year, I would write an article on the day being a Day of Shame in Ghana. I would post this to him and before calling to wish him a happy birthday – he found the time to respond with comments and his views. Whenever I was in Ghana, he was on hand to ferry me to see all the important persons who he felt I should meet or let me have access to his car and driver. When my mother passed he was the sole person who found time to communicate with me in London as I struggled to come to terms with the shock and the pressure; it was Bra Ate who sent me a funeral grid to help me make sense out of the process of organising a funeral. Reading those emails as I write this tribute reinforces the enormity of our loss.

So it is with deep sadness that I pay tribute to this selfless modern day hero of mine, an approachable affable personality who inspire people of all ages around him and who genuinely found time for me and other members of our family.

So my monitor and citizen, my brother coach and helper; “Anaanu”, Spider, as your friends called you, sleep well in the Lord and we ask that your children Nii Amaa and Naa Abia and your good wife Naa Lamley are consoled by the fact that you lived a life of service to your family and your friends and you will forever be in the hearts of the numerous people whose lives you enriched through being of service to them and helping them.