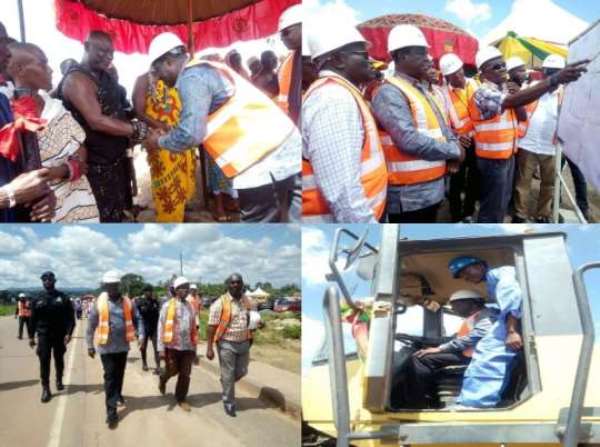 The Minster for Roads and Highways, Mr Kwasi Amoako-Attah has cut the sod to complete the second lane of the 32 kilometre Kwafokrom -Apedwa section of the Accra to Kumasi highway dualisation.

The GH¢333 million dualisation project would be undertaken by China International Water and Electric Corporation and is expected to be completed in 24 months.

The Sector Minister in his address urged politicians to respect the citizenry by developing the attitude of continuity as a way of saving the public purse to complete projects started by their predecessors.

He said the Accra -Kumasi Highway dualisation was to have been completed in 36 months after the sod-cutting in 2008 by ex-President Agyekum Kuffour, however, after 10 years the project was yet to be completed.

Mr Amoako-Attah said the initial programme at the Ministry was that after the completion of the Accra - Kumasi dualisation, it will stretch to Paga and the road is one of the Presidents' top priorities and its completion would drastically reduce road accidents.

He said it was the President's vision to have Accra - Kumasi - Paga, Accra-Takoradi-Elubo highways made a dual carriage way as well as Accra-Tema- Aflao highway.

Mr Amoako-Attah assured Ghanaians that the first term of President Akufo Addo's Administration would see a massive road infrastructure upgrade in the country.

''Good roads are the foundation around which economic development evolves, so every government that seeks for development for his people tackle roads' 'he added.

The Eastern Regional Minister, Mr Eric Kwakye Darfour urged communities around the road stretch to support in the success of the project since there was time frame for the completion of the project.

The Chairman of the Parliamentary Select Committee on Roads and Transport and MP for Ayensuano, Mr Ayeh Paye commended the government for the project and said it would reduce accidents that occur on that stretch.

He said statistics showed that between January to September this year, 1,710 people had died as a result of road accident between Kwafokrom and the Apedwa stretch. GNA