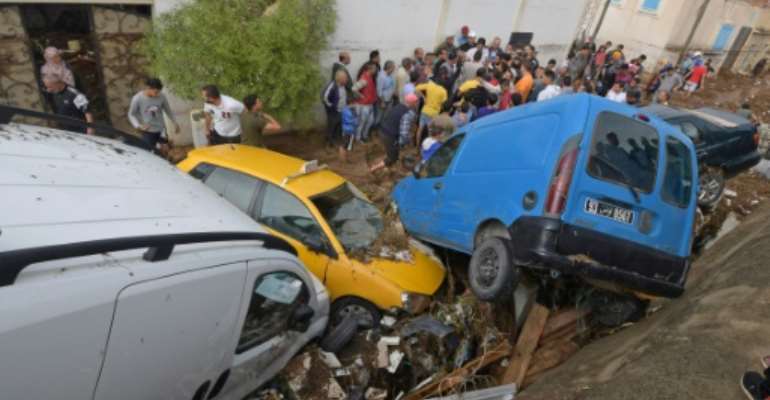 Cars piled up in a street after they were hit by flash floods in the city of Mohamedia near Tunisia's capital Tunis on October 18, 2018. By FETHI BELAID (AFP)

Flash flooding in Tunisia has killed at least five people while a further two are unaccounted for, the interior ministry said on Thursday.

Two died in the Kef region in the northwest and another in Grombalia in the north, ministry spokesperson Sofiene Zaag told AFP.

On Wednesday a six-year-old child drowned in Sidi Bouzid in central Tunisia and a 40-year-old man was swept away by a seasonal river in the neighbouring province of Kasserine, the ministry said.

One person has been missing since Wednesday in Kasserine and another in Zaghouan in northeastern Tunisia, Zaag added.

The drownings come less than a month after torrential rains killed at least five people in the northeastern region of Cap Bon.

Water levels have risen in several cities, including Tunis and its outskirts, where most schools were closed on Thursday.

Some commuters parked their cars and took off their shoes as they navigated flooded routes to work in the capital.

The interior ministry urged drivers to take care, as numerous roads across the country are impassable.

People have lashed out at the authorities for failing to maintain drainage systems or clear rubbish from seasonal riverbeds, despite frequent heavy rains in the autumn.