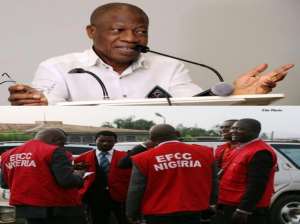 Every day, you hear people talk about fighting corruption in Nigeria. Nigeria has become known as one of the most corrupt countries of the world. Nigeria has also become known as the centre of global poverty because of what has been described as “official corruption”. The unfortunate thing about this fight, however, is that the government seems to single out individuals who occupied or are still occupying public offices and who are suspected of tampering with public funds for investigation and possible prosecution. To my mind, this is a travesty of justice.

On one occasion on my way to the city, I had to stop over to see a friend. I was on vacation in Nigeria. The road was really in a bad shape. So, I put on my hazard lights to warn drivers coming from behind. What happened next? The people around started to laugh at me. Some booed at me. I asked what was going on. One of them asked me if I thought I was still in England. In Nigeria, putting the hazard lights on meant you were travelling straight! And my car was not travelling. It was parked. So, they didn’t see any reason I should have put on the hazard lights. I was shocked. Was that why some were booing at me? What sort of people are these who would not obey international laws, I kept asking myself.

Again, I was on vacation in Nigeria and was driving home from my new office in my state capital, Owerri. At the state university roundabout on Okigwe Road, the traffic light showed red. There were traffic wardens and a few police officers at the roundabout, presumably stationed there to apprehend defaulting road users. But they were not actually doing any work. They just sat there chatting. And while I was waiting for the red light to change, other vehicles came by and totally ignoring the red light zoomed past my stationed car. One, two, three, four, five cars passed by and I was still waiting. Six, seven and eight cars passed by. I wondered. I looked like either a fool or what locals called a JJC (Johnny Just Come) – meaning that I was new in city. Then I ventured to follow them and was soon on my way home. But the incident kept me thinking. What sort of country could this possibly be that would spend huge sums of money to install traffic lights that would never be obeyed by anyone? What was the use of the traffic lights if motorists would ignore them and criminalise the driver who attempts to obey the traffic signals?

Nigeria is one country where citizens look for money and not for jobs. The system has so corrupted their minds that they don’t trust that work will definitely fetch them the money they need to keep body and soul together. Who would blame them when subsequent governments over the years have woefully failed to enact laws that would protect working class families and by extension the Nigerian society from fraudulent practices? Nigeria is one country where workers are owed arrears of salary running into several months and yet the workers are expected to go to work every day. And they do, because it is worse if you lose your job, if you have no work. At least, in the compound where you live, you wake up in the morning, take your bath, dress and leave home. Your neighbours know you have gone to work. They respect you. But the moment you have no job, the drumbeat changes. You lose respect among your neighbours and in fact they begin to associate you with evil practices like robbery. And no family man wants that. So, they keep working and government keeps promising to pay. And somewhere along the line, the workers find a way to survive before their wages are paid. After all, they have families to cater for and no one would expect them to fold their hands while hunger ravages their families. And so, the system itself – the inability of employers of labour to pay workers when their pay is due – drives the workers into a situation that demands them to be corrupt to survive. The messenger at the office will not pass your file to the next table unless you grease his palm. The airline officer at the airport will not offer you a window or isle seat unless you “see” him. The teacher of your children will not care about them unless you “enrol” your child in their special care, and so on.

When I was the Features Editor of the Nigerian Statesman newspapers in the early 1980s, we had the same experience of not being paid in time. We were owed salary arrears running into several months. Most of our families were eating from hand to mouth despite our “high” official positions. We later discovered that government actually made the salaries available to our Managing Director at that time. But rather than pay workers, he would deposit the whole money for the payment of close to two thousand workers in a fixed deposit account in his own name and with his family enjoy the interest on that huge sum while the rest of us hard working families languished in penury. What could we do? It was the system.

Even my immediate younger sister who recently retired as a head of department in the biggest oil company in Nigeria, the Nigerian Liquefied Natural Gas, NLNG, told me the story of her own experience. One of our cousins and her husband had borrowed N10 million from her initially. They wanted to invest the money in a business. About two weeks later they brought back the money with an interest of 10% and my sister was overwhelmed with joy. She thanked them for their honesty and transparency. The following month, they came again and told my sister another opportunity had offered itself. Again, my sister loaned them N10 million. And that was it. Month after month, my sister waited for her money. Our cousin and her husband said the deal “knocked” and they would not be able to pay back. In desperation and anger, my sister approached the EFCC. Even though it was what could be termed a “family affair”, my sister knew that no member of our wider family could get our cousin and her husband to pay back the money they borrowed. So, she headed to the EFCC.

The EFCC invited the couple. After interrogation, they agreed to refund the money at N1 million per month, over 10 months. No one was thinking or talking about profit any more. So, in the first few months, the couple paid into EFCC account as they were bound to. And when my sister went to collect the money, EFCC would take its own “cut”, running into several thousands of naira. At the end of the day, my sister felt the exercise was not worth it. So, she made her peace with our cousin and her husband and withdrew the case from EFCC. Then our cousin and her husband continued to pay gradually and directly into my sister’s account, until they finished paying the bill and my sister learnt her lesson. So, even the EFCC itself is corrupt to that extent.

Everywhere you go in Nigeria, the system is the same. The system is simply corrupt. In one instance, the story was told of Nigeria accruing some huge sums of money after Iraq was invaded by America and Britain in 2003. That money was shared out among the top officers of the oil companies. And there was this accountant that was allegedly given $US2 million as his share. He turned the offer down and allegedly told his colleagues he could not bring himself to defraud his own country. That night, according to the story, they sent assassins to his house and they killed him. He was not going to be the one to expose them! And that is as difficult as it could be to become a good, law abiding Nigerian.

So, when government addresses this issue of “fighting against corruption”, it should appreciate that singling out individuals as corrupt whereas in fact the system itself is the foundation of corruption is to my mind a travesty of justice. What government needs to do is to find out how the system can be revitalised in such a way that the ordinary Nigerian begins to create more value in his life. What should be done to a corrupt system that has continued to produce corrupt leaders who, by and large, are incapable of grappling with the challenges that face the country?

At the moment, Nigerian legislators have been variously touted as the highest paid in the world. The politicians themselves have neither confirmed nor denied the allegation. To be fair to all, therefore, the average wages of about five rich countries – China, Russia, South Africa, America and the United Kingdom – can be taken as the net pay of a Nigerian legislator. In such a way, state actors would be discouraged to see the political arena as a safe haven for rogue politicians.

The second thing the government has to do is to initiate a bill that will ensure that workers and their families are paid when their wages are due. As long as the practice of owing workers continues, it is impossible to fight corruption. The hunt for thieves who stole public funds will not stop Nigerians from stealing unless the system is overhauled completely. At best, it will induce Nigerians to find new ways of stealing without being discovered. But if workers are enabled to manage their lives properly by being paid normally as is done in the more developed democracies, then they would be in a position to blow the whistle when their bosses plan to cart off huge sums of public funds. They won’t be in a position to do that if they are literarily in the same boat with their bosses.

One more reason why the system is corrupt is the fact that political offices are being offered political actors as compensation without recourse to the ability of the recipient to deliver. Even the minister of information Alhaji Lai Mohammed confirmed this – that some of the people who worked for the ruling APC government and expected to be compensated with board memberships or headships were not “adequately compensated” because government could not possibly please everyone all the time. And when a board chairman is untrained about the role he is expected to play, what do we get?

In summary, I think the Buhari administration should get its priorities right. I said this a few days ago, and I am saying it again with greater emphasis. Any fight against corruption that does not address the issue of a corrupt system and does not address the issue of paying workers promptly is doomed to failure. What the Buhari administration could actually “achieve” is a vicious circle where each incoming administration would normally start the day by probing its “corrupt predecessor” and recovering stolen money. The danger is that it could degenerate into a situation where the anti-graft agencies now become political tools in the hands of unscrupulous politicians bent on a vendetta mission. So, if the Nigerian government really means to fight corruption, it could take a queue from sister countries like Mauritius, Rwanda and Botswana. They too fought against and defeated corruption. How did they do it? What did they do? If Buhari and his APC government are really serious about fighting corruption, Nigerians should see them actually fighting corruption in Nigeria.