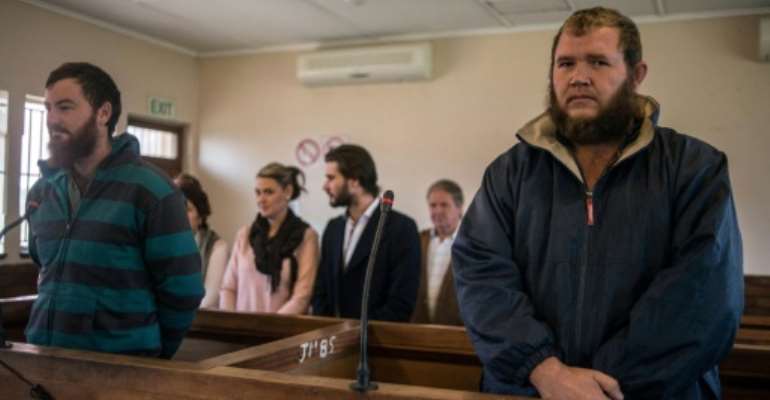 Pieter Doorewaard (L) and Philip Schutte, pictured May 2017, were found to have killed Matlhomola Mosweu, a black teen, after claiming they caught him in the act of taking a plant from a farm. By MUJAHID SAFODIEN (AFP/File)

Pieter Doorewaard and Philip Schutte were found to have killed Matlhomola Mosweu on April 20 last year, after claiming they caught him in the act of taking a plant from a farm in the area.

The boy died after being thrown out of a moving vehicle driven by the pair and suffering a broken neck, in a case that sparked rioting and looting of white-owned businesses in the town of Coligny.

The men had claimed that the teen jumped off the truck as they drove him to the police.

Judge Ronald Hendricks also found the pair guilty of kidnapping and intimidation. They will be sentenced at an unspecified date.

In 2016 two white farmers in eastern Mpumalanga province forced a black man they accused of trespassing into a coffin.

The case sparked outrage after a video of the incident emerged on social media and the two were handed jail terms of 19 and 16 years.