The Ebola Pandemic Is About To Begin 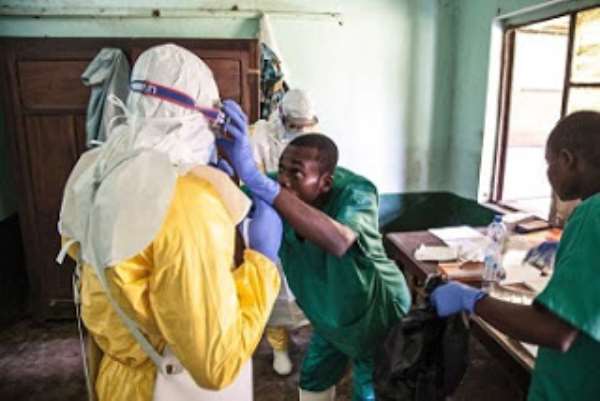 A deadly disease such as Ebola is only one flight away. The U.S. government must start taking preparedness seriously. And at this very moment, the World Health Organization chief Tedros Adhanom Ghebreyesus has convened "an emergency committee" on the current outbreak in DRC's violence-torn North Kivu region, which has killed 135 people since August 2018.

The World Health Organization has tried to increase attention and enhance preparedness by strongly supporting the Joint External Evaluation, an assessment of each country’s capabilities in preventing, detecting, and responding to a potential outbreak in order to fight the Ebola virus to a maximum effort to avoid a global outbreak.

Pandemic preparedness is a matter of national security and needs to be treated that way. The greater the complacency, the bigger the next crisis will be. But where have they all been when Africa fights Ebola by undergoing the disease? How many whites died because of this virus in comparison with blacks.

Why blacks? Does the Ebola virus like to kill blacks more than whites? No, of course, not. The whites invented the Ebola and Aids viruses and the latter killed mostly black people or homosexuals in Europe, Africa and the United States of America.

It has become known that the American Centers for Disease Control Ebola experts have been blocked from the outbreak zone in DR Congo.

Of course, official statements made by the World Health Organization, Centers for Disease Control, and politicians of the concerned countries fighting Ebola tell us blocking of institutes like CDC will make the new outbreak more difficult to contain.

It might also be possible that the Congolese population is aware of what really transpired with AIDS and now Ebola vaccine trials are being used which raises a lot of suspicions over why the population of ancient Africa without any development wasn't killed by Aids and Ebola but now developing Africa has been hit hard by the two deadly diseases, which have affected black people than any race in this world.

However, news stories are providing few details about why they're blocked from the outbreak zone, except that it's related to attacks in Benghazi, Libya, that killed US ambassador J. Christopher Stevens and three other Americans and now also healthcare workers in the Democratic Republic Congo DRC.

The inference that we're to draw, apparently, is that Americans in the North Kivu war zone would be targets of attacks similar to those against ambassador Stevens in Lybia, journalists and healthcare workers. But the real reason why people are attacking or refusing experimental vaccines is never be mentioned properly.

Ebola is spreading out of hand after so-called necessary vaccine trials, and now the World Health Organization has declared the Ebola outbreak as a Global emergency. Can history repeat itself in medical crimes?

Let me explain, the initial plan of Aids was to kill Africans only before the mistake they did by not protecting their borders made the perpetrators to have a taste of their own medicine. And since Ebola is deadly and powerful than aids, it can easily escape attention to Europe and the United States of America. It might as well get into the hands of terrorists that want to harm America.

Can the World Health Organization explain how dozens of health workers, including doctors and specialists who are vaccinated against the Ebola disease, contracted the Ebola? This brings to the conclusion that the vaccines against Ebola in Congo aren't working. So the mere fact is they are just using the Congolese and people in surrounding countries as ordinary Guinea pigs in experimental vaccine trials which are forbidden in western countries.

And another significant question is how did Ebola arrive from Crimea to the Congo after it was invented during the Second World War in Germany and used in 1943 in Crimea? The first Ebola case occurred in Congo in 1976, when three Belgian scientists, including, Professor Guido Van der Groene were there. What were they doing there before the disease erupted? There are more answers than questions, not the opposite.

Why Africa Faces The Biggest Threat Of Ebola Explosion

It seems there is now a lot more attention to the Ebola epidemic because they are starting to be afraid of the rapid spreading of the disease to the rest of the world. Therefore, the time has come to investigate independently how these kinds of viruses are manufactured and applicated on Africans.

In fact, conscious and intelligent Africans have already started questioning the World Health Organization, the US government and the Centers for Disease Control but they pretend everything is normal, especially, the US government has isolated itself from speaking anything about Ebola, just as they did on Aids.

The designation "public health emergency of international concern" refers to a pandemic that is so serious that it not only might spread to other countries it's just a matter of where and when because it will arrive in Uganda, Rwanda and other countries.

Yes, dear readers, the situation in North Kivu province is the worst possible scenario but we haven't seen anything yet. There is not only a major ethnic war in progress in the Ebola-affected region but Ebola is now spreading in the densely populated city of Beni, which has become the new epicenter of the pandemic.

The entire Ebola region is now a war zone, and over one million people have been driven from their homes by armed rebel groups like the Allied Democratic Forces who are fighting government troops. The fighting is preventing doctors and experts from reaching infected people, in order to educate the population and do contact tracing.

Without contact tracing, there is no way to stop or slow the spread of the disease. But the aforementioned problems are most certainly not the cause of an Ebola pandemic because biowarfare institutes know exactly where and when to use there devilish experimental vaccines with the purpose to depopulate Africa.