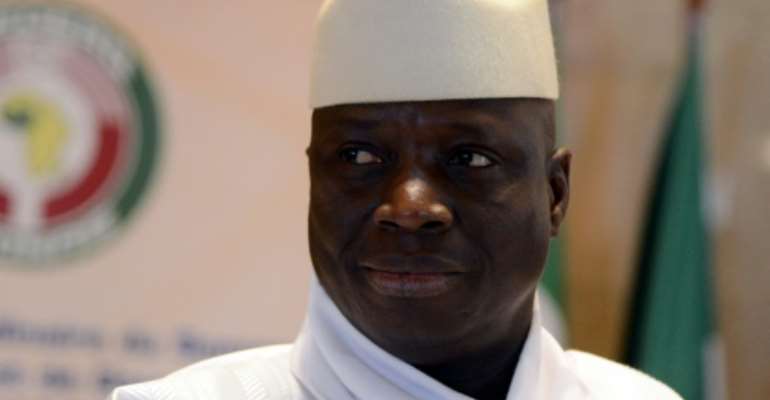 Jammeh flew into self-imposed exile in Equatorial Guinea -- whether he will eventually be put in the dock is far from certain. By ISSOUF SANOGO (AFP/File)

The tiny West African state of The Gambia on Monday swore in an 11-member commission tasked with shedding light on summary executions, disappearances, torture, rape and other crimes under ousted dictator Yahya Jammeh.

President Adama Barrow hailed the panel as a vital step towards national healing.

In a tweet, he said: "Let us stand together to say: 'Never again shall a few people oppress us as a nation. Never again shall the beautiful Smiling Coast experience a tyranny of the minority against the majority'."

Inspired by South Africa's investigation into the apartheid era, the commission will hold witness hearings into Jammeh's 22-year era of oppression.

The goal is to open the way to prosecuting those responsible and offering victims and their relatives the hope of closure.

"Gambians who were tortured or raped in prison, who were shot for peacefully demonstrating, who were forced into Jammeh's phony HIV 'treatment' programmes, whose family members were killed or who were targeted in literal witch hunts will all be able to come forward," said Reed Brody of Human Rights Watch (HRW).

"We know so much more today about the crimes of Jammeh's government than we did a year ago -- and when the truth commission is finished hearing from all the victims we should have a complete picture."

The two-year process, he hoped, marked the first step to "holding Yahya Jammeh and his henchmen to account."

Jammeh took over The Gambia, the smallest country on land in Africa, in a military coup in 1994.

He installed a structure of oppression and corruption that touched nearly every part of society.

Dissidents and journalists were picked up and tortured by the dreaded National Intelligence Agency (NIA). An ultra-loyal death squad called the Junglers carried out summary killings, including the alleged murder of scores of West African migrants.

Jammeh's reign began to crumble in December 2016, when he dramatically lost elections to Barrow, the opposition's leader.

He refused to step down, but was forced out the following month after other West African countries intervened militarily and diplomatically. He flew into self-imposed exile in Equatorial Guinea.

Created under an act of parliament, the Truth, Reconciliation and Reparations Commission (TRRC) aims at using openness and a court-like approach to investigate over two years how abuse began and became systemic and the impacts it had.

Justice Minister Abubacarr Tambadou, a former UN court prosecutor on human rights in Rwanda, said the TRRC would be a bulwark against any future dictators.

"Our nation may be small, we may be poor, but we have one tremendous resource, the illustrious sons and daughters of this country," he said.

The commission will be empowered to advise prosecution of perpetrators and recommend financial compensation to victims.

Its members are drawn from all the major regions, its five main ethnic groups and two religions, led by a retired UN diplomat, Lamin Sise.

Gender-based violence is expected to be a major theme of its mission, and four of the commissioners are women, on of whom is Sise's deputy chair.

The Center for Victims of Human Rights Violations, an NGO set up by victims and relatives of victims, says it has already documented hundreds of cases. 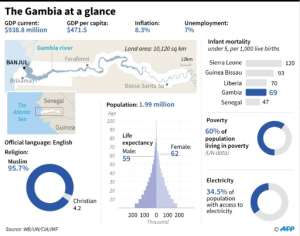 But the full extent of abuse may never be known and whether Jammeh himself will be put in the dock is far from clear.

Barrow has said that any decision to bring Jammeh to justice would wait until the TRRC has completed its work.

But Equatorial Guinean President Teodoro Obiang Nguema -- who has governed his country with an iron fist since 1979 -- has ruled out any demand for extradition.

"Jammeh must be protected... (as) a guarantee for other African leaders that they will not be harassed after they leave power," he said in January this year.