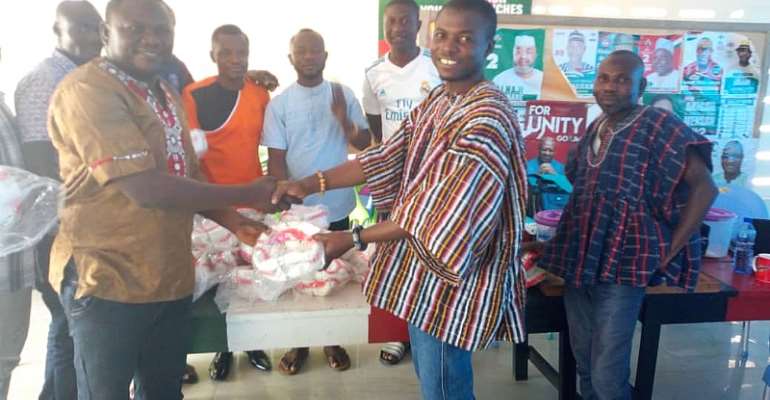 Football, in other words called soccer by the British, is one of the games that is highly patronise by Ghanaians across all levels. It is one of those games serving as a projector to magnifying nationalism and patriotism in Ghana. Football in Ghana, serves as an antidote cum panacea to lots of people's sicknesses, emotional and psychological torture. It is a double-edge sword. It improves the health of the people and also brings peace and unity among the people. The sense of togetherness and oneness will ignite in the youth, a deep spirited defense of the party at the constituency and branch levels.

Others do refer to it as a game of peace and unity. It is a game which brings people of all walks of life together. Football brings people of varied political orientations together. People of different religious doctrines, different ethnic background among other major divisions that are characterised by glaring disunity and its associated destructive agents are able to sit together, talk to one another, kind courtesy the almighty football. Football is also seen as a unifier, peace pipe smoker and more importantly a patronising catalyzer that fast-tracks the amelioration of all psychological and emotional problems.

The unrepentant and unflinching quest of the Upper West Regional Youth Organiser of NDC, Mr. Nicodemus N.B.D Dery, to fast-tracking the party's re-organisation exercise towards victory in the 2020 general election, donated two footballs each to every constituency youth organiser in all the eleven constituencies in the region. He also donated one football each to TEIN presidents in the various tertiary institutions across the region. This and many more interventions will be put in place to rebranding the youth front into a formidable one for the tasks ahead.

His unconditional preference for football to other games is not because football is his favourite game but rather, it is the game which so many people are enthused in thus its incomparable speed to bringing multitude of people more especially the youth, together. The magnitude of love for football by people across the country is beyond measure. It's therefore within reason to advance an argument that football is one of the best games one can use to speedily reconcile and re-organise people in preparation to carrying home their agenda.

It is indeed without any gainsay that every vibrant and enviable political party thrives on the youth in the country to outsmart its political opponents. The old and most commonly used adage, sound mind reside in a healthy body comes into sharp focus when our youth commander thought of swift ways of re-organising, rejuvenating and enlivening the youth front to establishing a formidable youth front for victory in the 2020 election.

Since the youth become the lubricant upon which every visionary and formidable political party runs on, our humble and intelligent regional youth commander deemed it worthwhile investing implicitly in the health of the party's youth across the ranks and files of the party in the Upper West Region. This initiative will strengthen the youth front and the party at all levels.

I elephantly, not the NPP elephant, laud his brilliant efforts to contributing in no small way to the re-organisation exercise that is patching up all the wounds that led to the defeat of the party in the 2016 election.