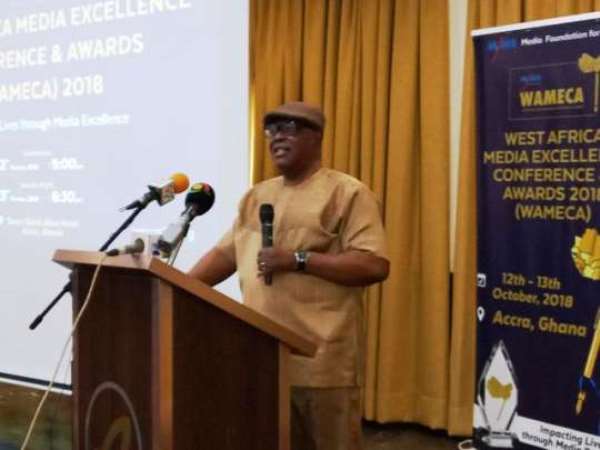 Nana Kwasi Gyan-Apenteng, the Chairman of the National Media Commission (NMC) has urged the media in Africa to uphold high quality standards and ethics of their profession.

Nana Gyan-Apenteng, who doubles as the President of the African Communication Regulators Network, said regulatory standards and guidelines were always needed to stimulate the aspiration of the media to do better and improve upon quality at all times.

'We need to set benchmarks within the practice that are exciting, that motivates us, that challenge us, that are visible and understandable to everybody.'

Nana Gyan-Apenteng said this at the West Africa Media Excellence and Awards (WAMECA) 2018, which preceded with a conference in Accra.

The conference brought together key personalities, organisations (local, regional and international), media practitioners, academia, activists and civil society organisations to reflect on the trends and challenges in the areas of free expression, media development and access to information.

The WAMECA awards on the other hand, is meant to reward and inspire media excellence in West Africa, as well as honour West African journalists who have produced works that impact on lives and societies positively.

Nana Gyan-Apenteng said WAMECA was of massive significance in the media development history of the West African sub-region.

The WAMECA, establishes MFWA even more firmly as one of the important media institutions not only in Africa but also in the world.

"Today, the little light lit by Professor Kwame Karikari and others about 20 years ago, has climbed into a major flame, brightening the paths of media institutions as they struggle for excellence in their endeavours," he said.

He explained that over the past decades, the media terrain in Africa had changed completely; stating that just about two decades ago it was a government dominated media terrain that answered to the powers that be.

Citing Ghana as a case study, Nana Gyan-Apenteng noted that about some 25 years ago the nation had one television station, two main radio stations and a few newspapers.

"Today we have more than 400 radio stations, dozens of television stations and at least 40 newspapers and journals on the new stands every day and every week."

"We have thousands of media outlets in the collective territories of West Africa providing avenues for multiplicities of voices to be heard."

The Chairman said: "It is gladening to say that we want the numbers game. In terms of quantities, the spread is enormous and had been rapid, and life changing for everybody. However, is a different story with the quality."

"We are far from achieving the desired level of quality; which we can and must aspire to."

He said the quality variation on the media landscape was astonishing with some at the very high end, doing very well, performing creditably in line with standard guidelines and ethics of the profession.

"But many of them languish far below the qualities here. And today, that is our challenge," he added.

Mr Sulemana Braimah, the Executive Director, MFWA, said the last two decades had witnessed significant growth in the media industry in West Africa and attributed it to the transition to democratic governance and the ever increasing access to the internet; declaring that fortunately governments no longer has monopoly over media ownership and control.

'The growth of the media industry obviously presents a great opportunity for the consolidation of the nascent democracy in the region,' he said.

'Such vibrant, pluralistic media landscape is what is required for fostering good governance and for promoting the wellbeing of the citizenry.'

Akufo-Addo dropped Gloria Akuffo over her opinion on the con...
8 minutes ago