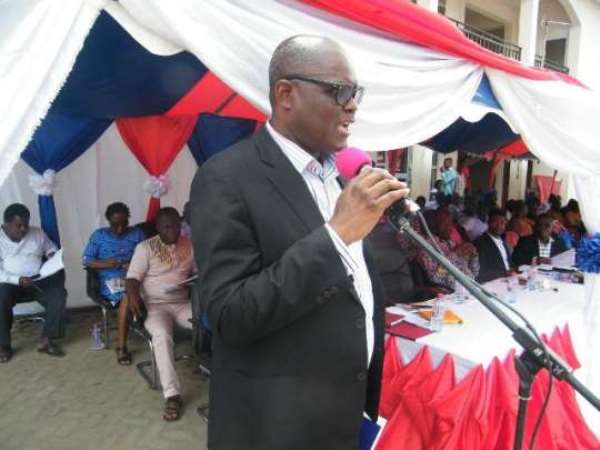 Mr. Steve V. Kamassah Chairman of Board of Directors of the Credit Union disclosed this at the 18th Annual General Meeting of the Union held at Winneba.

He disclosed that, as part of the Union's Cooperate Social responsibilities, they donated three pieces of Cooler Box (Ice Chest big sizes) and four bags of Poultry feed to the Effutu Municipal Assembly as their contribution towards the 33rd farmer's Day celebration as well as donating dustbins, rakes, wheelbarrows and pickaxes to Mampong Garages Association.

According to Mr. Kamassah, in spite of frequent withdrawals by some of the members, they made significant strides in building its investment base after having satisfied member's loan demand.

He said the board also proposed a 25 dividend on shares to encourage members to capitalize the Union of which the entire members agreed upon.

'The Union would not have achieved such success without the magnanimity of the management of UEW who have been supportive to the union, of which we deeply appreciate such support and call for their continuous support, confidence in the union and the leadership', he stated.

Rev. Father Professor Anthony Afful-Broni Vice Chancellor (VC)of UEW said in a speech read on his behalf that, there as management of the university, they acknowledged the various roles the members of the Credit Union played to sustain it.

According to the V.C, the Credit Union commenced with a mission to provide efficient financial assistance to its members, and indeed 'you have lived to the tenet of a cooperative as enshrined in their core existence' and as a result it, you have shouldered the financial burdens of staff of the university particularly when they have to pay school fees and rents as well as in difficult times.