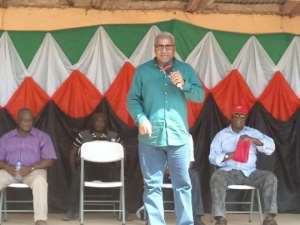 Former President John Dramani Mahama, a Presidential aspirant in the National Democratic Congress (NDC) race has called for campaigns devoid of insults among colleague aspirants who are seeking to lead the party in the 2020 general elections.

He acknowledged the competitive nature of the race and said 'we are all brothers in this competition.'

Mr Mahama said the party would have to come together as one strong united party to face the New Patriotic Party (NPP) in the 2020 general elections. 'There should be no insults, no acrimony, no problems with each other. After all when we finish the Presidential primaries, we have to come together again to fight NPP for 2020.'

Mr Mahama said this when he addressed delegates in the Bolgatanga Central Constituency as part of his three-day tour of the Upper East Region to canvas for votes.

'When our colleagues come to talk to you, listen to them, but at the end of the day, you have to decide who can go and take political power and bring it to us,' Mr Mahama advised.

He said the NDC could win back power from the NPP if it worked hard to unite its front, adding that 'I am confident that with the crop of party executives, from the branch to constituency to the regional levels, the NDC would defeat the NPP in 2020'.

The Aspirant urged the delegates to 'take the ballot box as your own, and guide it jealously. Two of you will sit there as party agents, the rest of you; all the members in the register, you know who our sympathizers and supporters are, on that day in 2020 you must go round and pull all of them out to come and vote.'

Mr Isaac Adongo, Member of Parliament (MP) for the Bolgatanga Central Constituency said 'we in the NDC and the supporters of John Dramani Mahama believe that the people of Ghana must bring him back not because NPP will fail, but because we have a better and superior management team that will deliver.'

He said the party was privileged to have a leader who believed in the youth because countless youth had benefitted from the leadership of Mr John Dramani Mahama, adding that 'we are yearning for the leadership that we have lost.'

He appealed to the delegates in his constituency to vote massively for Mr John Dramani Mahama to lead the party into the 2020 general elections to recapture power from the ruling NPP government.

Mr Mahama, in the company of former government appointees, past and present MPs and members of his campaign team, visited and interacted with delegates in the Talensi, Nabdam, Bolgatanga East, Bongo, Tempane, Garu, Bawku Central, Binduri and Zebilla Constituencies.

He rounded up his tour of the region with visits to Yagbe Kuobori, Builsa South and North, Paga, and Navrongo Central Constituencies on Friday.