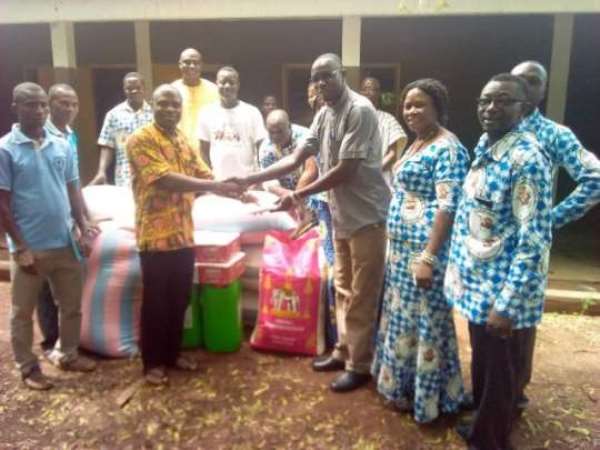 A delegation from Our Lady Queen of Africa (OLA) Parish in Bolgatanga in the Upper East Region has visited the Saint Victor's Major Seminary in Tamale in the Northern Region and presented assorted foodstuff as part of its Christian corporate Social responsibility.

The parish which is visiting the Seminary for the first time presented items which included; bags of maize, millet, oil and canned tomatoes to support the seminarians undergo their training.

Reverend Father George Omondi, Parish Priest of the OLA Parish who led the delegation, said the donation was from proceeds of a programme organised by the Parish, dubbed; 'Lent with Jesus' which was part of activities to mark the Parish's lent season.

He said the initiative was based on a lecture delivered by Most Reverend Alfred Agyenta, Bishop of the Navrongo- Bolgatanga Diocese, which revealed the deplorable conditions of the seminary.

Reverend Daniel Fuseini Saaka, Vice Rector of the Seminary who received the items, said 'the gift could not have come at a better time than this time,' and disclosed that the Seminary was under stressed in terms of food and other necessities for the upkeep of both the seminarians and the formatters.

He expressed gratitude to the Parish for the gesture, and called for similar visits from sister Parishes to support the Seminary.

GNA
By Godfred A. Polkuu, GNA