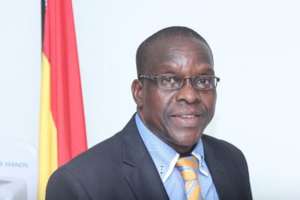 A group of National Democratic Congress (NDC) Branch Executives has revealed that a groundswell of support for Alban Sumana Kingsford Bagbin, in the party's flagbearership race shows that the second Deputy Speaker of Parliament will win massivelly ahead of other competitors.

At a news conference in Accra on Thursday, the executives who themselves are also delegates said per internal assessment that had been done within the party, the contest was between Mr Bagbin and former President Mahama but that the former President will be shocked.

'Our findings show that a shaky lead that Bagbin had had on former President Mahama has recently widened, and it is mainly due to fresh attacks that President Akufo-Addo and Vice President Bawumia have successfully launched on Mr. Mahama which have not been convincingly countered.

'Delegates are really keen on getting the NDC back into power in 2020 and believe that the NPP's abysmal performance in office created good enough chance for a comeback, but they are afraid of committing to work for the leadership of former President Mahama because of the corruption tag from the NPP,' Mr. John Mensah Koklootse We NDC branch executive member, who led the News conference said.

The conference which was attended by many other NDC delegates from the Greater Accra region also revealed that Mr. Bagbin would get about 80 per cent of the total votes.

According to Mr. Mensah, the findings have since been welcomed by the majority of the Branch Executives as a true reflection of the prevailing sentiments within the party.

'As an executive of the NDC, I know that whoever we put up as Presidential Candidate in 2020 will be too hot for President Akufo-Addo and the NPP to contest, but I also believe that of all the aspirants, Mr Bagbin is the one who will really be untouchable by the NPP because of his reputation as an incorruptible man,' Mr. Mensah said.

On the sidelines of the conference, some of the executives who spoke to journalists generally admitted that the revelations by the leaders of the news conference was indeed a true reflection of what people were thinking in the party.

'As I speak to you, I will for instance vote for Mr Bagbin simply because I believe that President Mahama has had his chance and should give way to others,' Mr. Joseph Amekortu said.

His sentiments were re-echoed by Cynthia Nuvorvor, a branch women organizer who said that former President Mahama's shocking defeat in 2016 was too wide to brush aside in less than two years and make a comeback.

'The point is that, the corrupt image that the NPP succeeded in tagging the former President with, have not been addressed and for me, it is a serious nightmare. Look at how Akufo-Addo and Bawumia have began attacking him again, and when they did, we did not have any effective response.

According to her, the fearful spectre of former President Mahama falling under the incompetence and corruption tags again made Bagbin the clearest choice to make for flagbearer.