Tackle Challenges In Schools Not Headteachers – Mahama To Gov’t 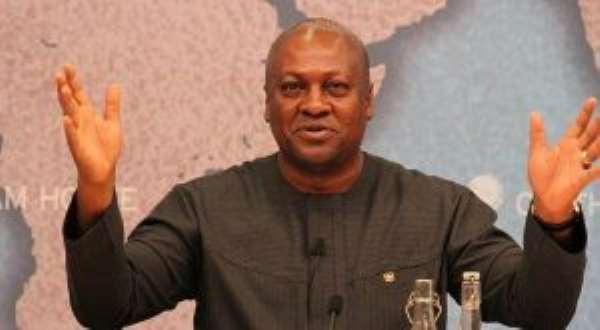 This follows the suspension of headteacher for the Tempane Senior High School (SHS) over a visit by the Deputy National Organizer of the National Democratic Congress (NDC), Joshua Akamba, who incited some students of the school against government's free SHS policy.

Akamba asked the students if they were experiencing issues with bedbugs in their dormitories as a result of congestion which has been occasioned by the free SHS policy, to which they responded in the affirmative.

He made the students show their bedbug bite scars to the cameras, and promised them their challenges will be over in 2020 if they vote out the NPP.

He got the students to hoot at the President, Nana Addo Dankwa Akufo-Addo.

Addressing delegates of the National Democratic Congress (NDC) in Garu in the Upper East Region, Mr. Mahama said the headteacher's suspension was unfair.

He said the problems of the school are real and the government must tackle them instead of intimidating headteachers.

“Our National Executive Member was invited to the Police station and he was asked to write a statement and he has been granted bail pending investigation. NDC is a tolerant party and we believe in democracy and we do not see the reason why we should hinder anybody from speaking the truth. If Akamba did not go to the school, does it mean the school is not congested? Does it mean bed bugs are not chewing the children?

“What he did was to bring it to the attention of the government and so what you should do is rather than invite Akamba and interdict the headmaster, do something about the conditions in the schools and stop intimidating headmasters. When we were in government, many NPP officials went to the schools and openly campaigned and yet they interdict these headmasters. And the point is if we want, all of us can go to the school, come and arrest me. Do something about the condition in the school and stop intimidating headmasters and inviting political opponents for investigations.”

The Ghana Education Service (GES), which has described the development “inciting students against President Nana Akufo -Addo and the Free SHS programme,” has asked political activists to refrain from campaigning in various secondary schools.

“Management of GES condemns such acts and wishes to bring to the attention of the general public, especially political activists that the Ghana Education Service is a non-political state agency with the key responsibility of implementing pre-tertiary educational policy of the country and wishes to remain as such.”

“Meanwhile, all regional and district directors of Education and Heads of SHS have been directed to ensure that schools and students are not used for political activities without authorization. Management wishes to assure parents and the general public that steps have been taken to ensure that students and school premises are immune from such unwarranted political interference.”

Although GES rules are clearly against political activities in all schools except tertiary institutions, the two main parties often break the rules.

The youth wing of the governing New Patriotic Party (NPP) has since condemned the Deputy NDC National Organizer over the incident.

In a statement, the NPP indicated that the development was a “clear indication of the NDC's vicious intentions for the free SHS Program.”

While calling on the GES to investigate the issue, the party's youth wing also called for sanctions against authorities who allowed the incident to take place.