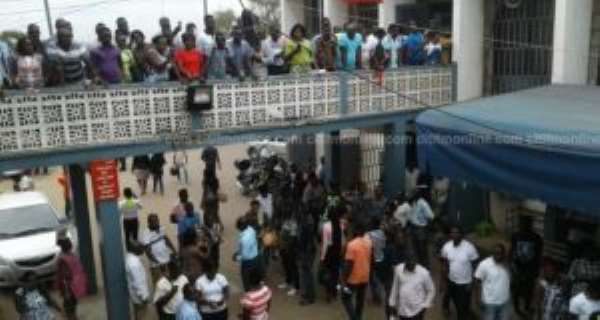 The Importers and Exporters Association has accused the Ghana Union of Traders Association (GUTA) of betraying stakeholders in the sector over the implementation of the controversial Cargo Tracking Note (CTN).

The Ghana Revenue Authority (GRA) has announced that it will fully implement the Cargo Tracking Note (CTN) system at Ghana's ports from October 15, 2018.

After a stakeholder meeting with Vice President Mahammudu Bawumia yesterday, it emerged that GUTA, without the consent of the other stakeholders, agreed to specific terms including its full implementation on October 15.

In a Citi News interview, Executive Secretary of the Importer and Exporters Association, Samson Awingobit described GUTA's move as a stab in the back.

“GUTA has betrayed us because; we went in as a group. But the Economic management committee members said we couldn't form a quorum so we should go back and come the next day. That very night, customs invited the GUTA President and some of his executives in a meeting where they compromised on the reason for us to implement the CTN; and they accepted it.”

“It's a stab in our back that the GUTA president went behind us and accepted it when we had not accepted it as a group.”

Ignore betrayal claims – GUTA
Meanwhile, President of GUTA, Joseph Obeng has indicated that the claims of the importers and exporters association are unfounded.

Speaking on Eyewitness News, Mr. Obeng said GUTA's dislike for CTN has been consistent which is well known among the relevant stakeholders.

“It is never true and it can never be true. GUTA is a leading organization in all this cause. We have been very consistent in our position that we don't want the CTN. We never had a private meeting with officials of the GRA. When the EMT meeting was postponed because we didn't have a quorum, told the stakeholders including the importers and exporters association that I want to see the concession to be well informed. And, they are all in the known. Nobody is stabbing anybody in the back.”

The action was necessitated by what the businesses described as government's failure to heed concerns on the policy which impedes trade facilitation.

But now a letter issued by the GRA and addressed to the Shipowners & Agents Association of Ghana, said, “for the avoidance of doubt, all shipments made on 15th day of October 2018 and thenceforth to Ghana or with Ghana as the country of destination must be covered by a CTN number.”