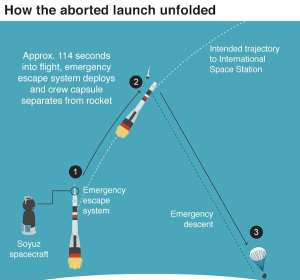 Russian officials are investigating the cause of a booster problem that forced a Soyuz rocket capsule to make an emergency landing just after launch.

They were heading for a six-month mission on the International Space Station when their flight was aborted.

Their capsule separated and landed 400km (250 miles) from the launch site.

What happened during the flight? The launch appeared to be going smoothly, but some 90 seconds into the flight, the US space agency Nasa reported a problem with the booster rocket between the first and second stages separating.

Live video of the astronauts showed them shaking violently with the vibrations caused by the malfunction.

After around 114 seconds of flight, the emergency escape system sprang into action, separating the crew capsule from the rocket. 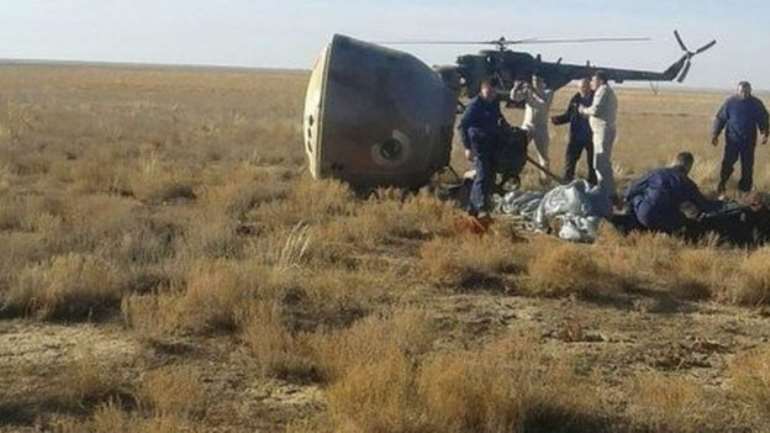 Image captionRescuers dashed to the landing site The capsule then began what Nasa termed a "ballistic descent", subjecting the crew to greater G-force - the force imposed on a body by rapid acceleration or deceleration - than during a normal landing.

Nasa said the capsule, which later deployed parachutes, took 34 minutes to reach the ground on the Kazakhstan steppe, hundreds of kilometres north-east of the Baikanour cosmodrome launch site. 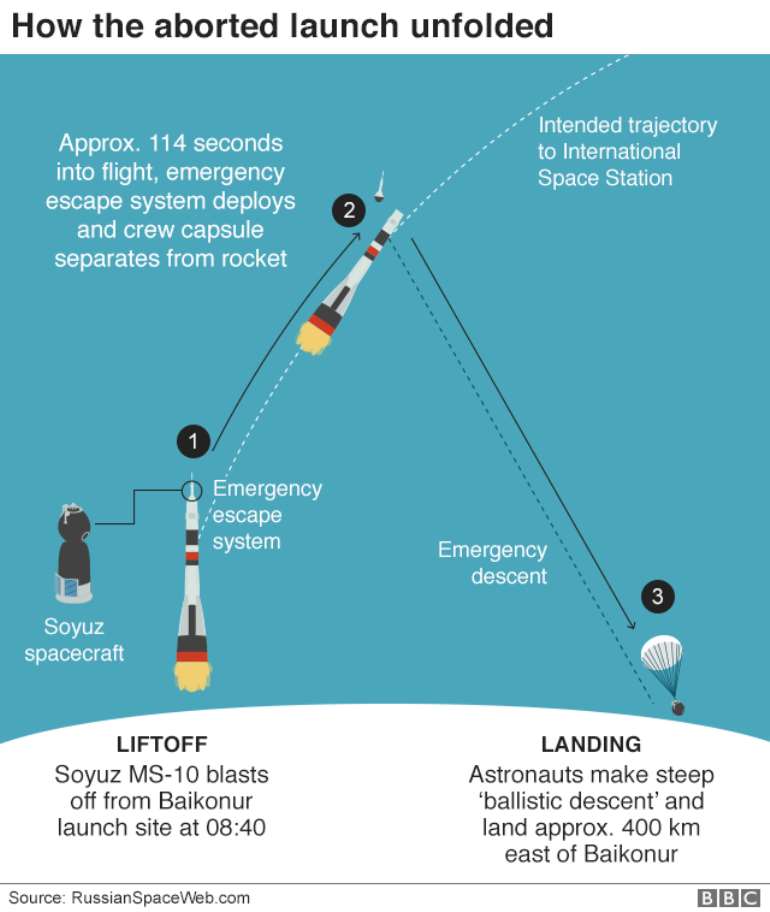 How have the crew fared?

Rescue teams using off-road vehicles and paratroopers deployed in helicopters raced to locate the capsule, near the Kazakh city of Dzhezkazgan.

Soon afterwards both space agencies were reporting the astronauts were in good health. Pictures showed the two men seated smiling on a sofa attached to heart rate and blood pressure monitors. 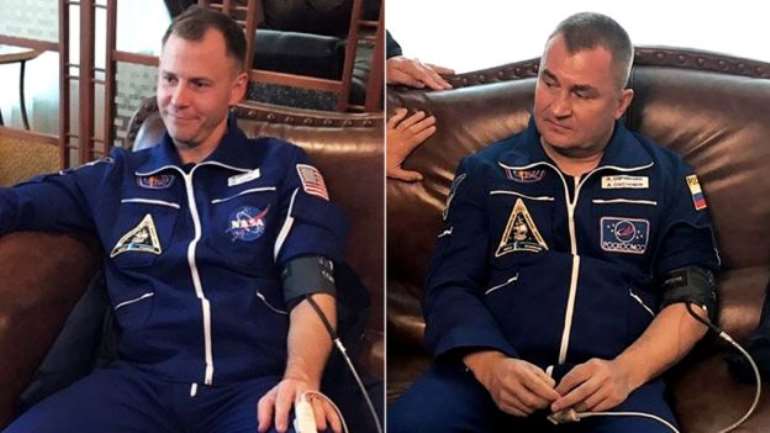 Analysis: An uncomfortable ride back to Earth 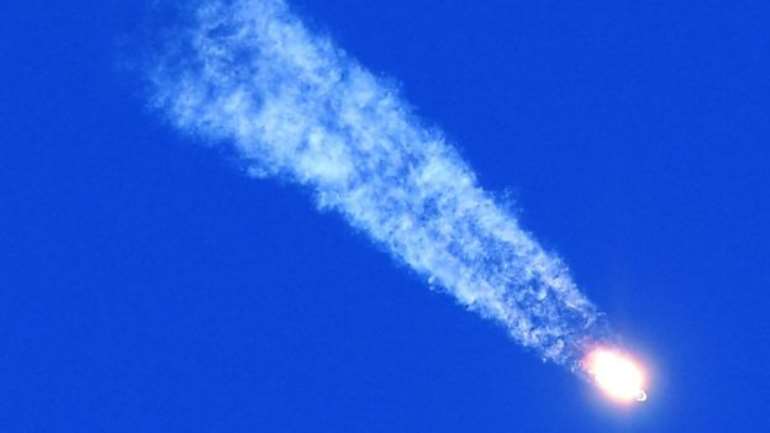 Soyuz is one of the oldest rocket designs but also one of the safest. The malfunction appeared to occur around what is termed "staging", where the ascending vehicle goes through the process of discarding its empty fuel segments.

The onboard astronauts were certainly aware that something was not right because they reported feeling weightless when they should have felt pushed back in their seats. The escape systems are tested and ready for exactly this sort of eventuality. It would have been an uncomfortable ride back to Earth, however. The crew would have experienced very sharp accelerations and decelerations on the return.

There is already much discussion about the current state of Russian industry and its ability to maintain the standards of yesteryear. Whatever the outcome of the inquiry, this event will only heighten those concerns and will underline to the US in particular the need to bring online new rocket systems. These vehicles, produced by the Boeing and SpaceX companies, are set to make their debut next year.

What does this mean for future Soyuz missions?

He rejected suggestions it could harm US relations, saying they recognised it was a "hi-tech industry linked to risk", but he added: "We certainly won't conceal the reasons, it is uncommon for such situations".

Space co-operation is an area which has survived otherwise tense relations between Russia and the US. Nasa has been paying for seats on Soyuz rockets to ferry its astronauts to the International Space Station since the Space Shuttle programme ended in 2011.

The crew already on the ISS will not be affected by Thursday's aborted mission, Russia's Tass news agency reported, quoting an unnamed source as saying they have enough supplies.

But the three - a German, a Russian and an American - might have to stay on the space station into next year due the crash, Interfax quoted a source as saying.

Roscosmos has ordered the setting up of a state commission to investigate the incident and a criminal investigation is also expected.

Have there been similar incidents in the past?

Thursday's incident is thought to be the first launch mishap for a Russian Soyuz booster since a Soyuz mission was aborted in 1983. Then, a rocket malfunctioned shortly before launch, and the crew vehicle was ejected to safety.

In recent years, Russia's space programme has faced a number of technical failures - 13 since 2010.

Last year, contact was lost with a Soyuz rocket's Fregat upper stage, which was carrying a new weather satellite and 18 secondary satellites.

Earlier in 2017, at least nine of a payload of 73 satellites were reported "dead on arrival or severely degraded" after separation from their Soyuz-2.1 launch vehicle.

In August, a hole appeared in a Soyuz capsule already docked to the ISS which caused a brief loss of air pressure and had to be patched. In this instance, Russia said the hole may have been drilled "deliberately" .

One of the most serious but non-fatal US incidents involved Apollo 13 - a mission to the Moon in 1970. An oxygen tank exploded two days after launch causing a loss of power and leading to the mission being aborted. The crew were able to carry out repairs and return to Earth six days later.

While space missions may often encounter technical difficulties, fatalities have been relatively rare: 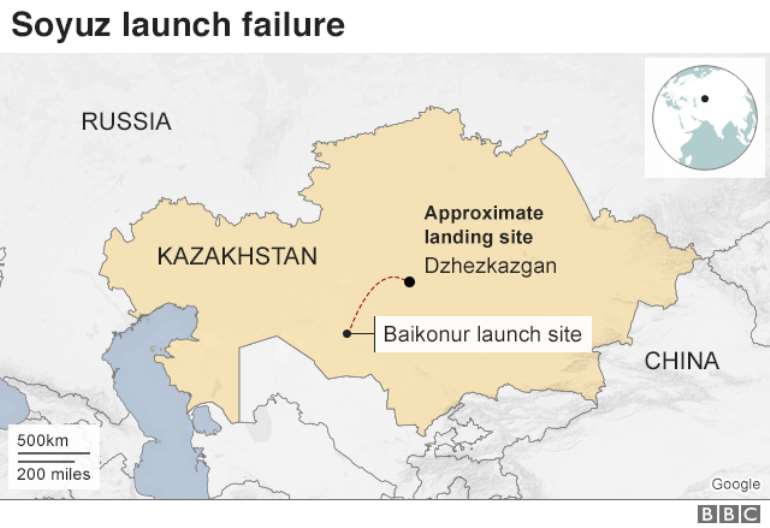