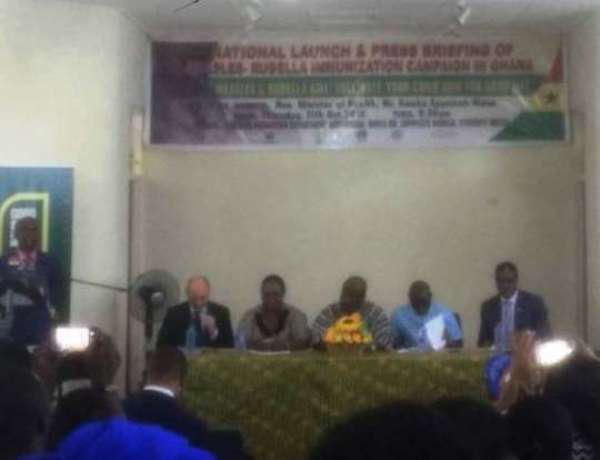 The Ghana Health Service (GHS) in collaboration with the Ministry of Health on Thursday launched a six-day national Measles-Rubella vaccination and Vitamin A supplement campaign to improve the general health and survival of Ghanaian children.

The campaign, aimed at ensuring healthy lives and promoting well-being for all ages to help reduce the number of measles-rubella cases in the country.

The campaign, expected to start from October 17 to 22, 2018 is targeting at immunising over four million children from nine months to under five years in all the 216 districts.

It will be on the theme; 'Measles-Rubella Kills; Vaccinate Your Child Now for Good Life'.

Dr George Bonsu, the Programme Manager, Expanded Programme on Immunisation (EPI), said data indicated that measles kills almost 90,000 people globally each year and it was a leading cause of death in Children under five years.

He said measles had been the major killer before the 1980's and ranked second to malaria in Ghana, adding that, reports had also revealed that 100,000 children are born with Congenital Rubella Syndrome (CRS) globally.

Dr Bonsu noted that in 2017; 19 cases of Measles and Rubella were recorded but as at January to August 2018, 29 cases have been recorded hence the need to intensify campaign on the disease.

He urged Ghanaians especially parents to ensure that they take their eligible children for the immunization to help prevent and eliminate measles and rubella.

Dr Gloria Quansah-Asare, the Deputy Director-General, GHS, said the campaign was geared towards achieving the Sustainable Development Goals (SDGs) by 2020.

She said the introduction of immunisation against killer diseases, like measles had improved the health of children significantly.

Dr Quansah-Asare said the country had made significant gains in controlling measles for the past 15 years saying 'no child has died from measles in the country'.

She said that notwithstanding, measles and rubella are endemic, hence, the need for the campaign as the disease could kill and maim children.

She said the measles and rubella vaccines are safe for children and noted that the immunisation would take place in health centres and at a number of temporary posts set up in schools, markets, bus stations, churches and all communities in the country.

She however, advised that children remained at the place of vaccination for at least 15 minutes after administration of the vaccine.

Mr Fiachra McAssey, UNICEF Deputy Country Representative, commended the Government for the successes chalked in the fight against measles-rubella.

He pledged UNICEF's support towards government's effort to bridge the equity gap for immunisation and other child health interventions through data driven equity analysis to generate the needed evidence for the targeted mediation for underserved groups and communities.

Dr Owen Kaluwa, WHO Country Representative, noted that the number of children vaccinated through routine immunisation had increased over the years in the Africa Region and Ghana was one of only five countries in Africa that had achieved the 95 per cent target coverage rate for the first dose measles-rubella vaccination.

He said the 2018 measles-rubella vaccination campaign illustrates Ghana's commitment to eliminating measles by 2020 in line with the Global Vaccination Action Plan.

'This will only move us a step closer to achieving elimination but also accelerate the control of CRS and subsequently reducing child mortality,' he said.

Mr Kwaku Agyemang Menu, the Minister of Health, in a speech read on his behalf said it was important that measles elimination was only possible if population immunity was kept at more than 95 per cent over a long periods through routine immunisation and supplementary activities.

He said immunisation of children against diseases was something that ought to receive the enthusiastic support of everyone in communities.

He expressed gratitude to all development partners who supported Ghana financially, logistically and technically towards the campaign adding that children are the most precious resources hence, the need to do all that was possible to prevent them from disabilities or deaths due to measles-rubella. GNA