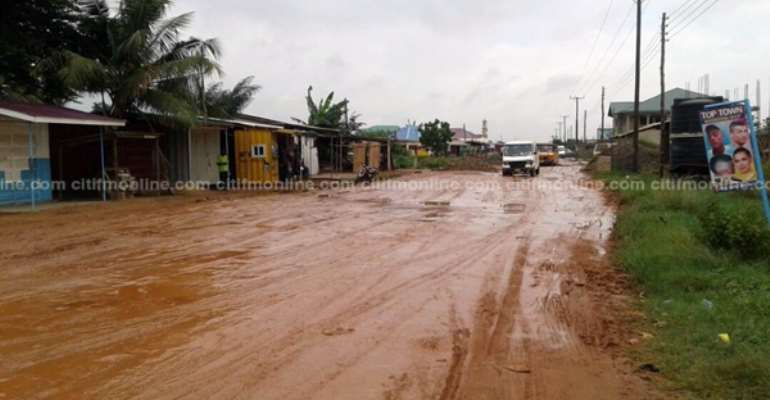 The Member of Parliament for area Hon Alhaji Abubakar Saddique Boniface and the Assembly have taken steps to have these anomalies corrected.

He noted that after the grading exercise all the other materials will be laid for the final lay out which will be the asphalting of the stretch.

The Minister in an interaction with the contractor said the zeal by residents and commercial drivers to see development on the roads in the area has been long overdue.

He indicated that the move will see many more residents as well as commercial drivers come to the realization that the governing New Patriotic Party (NPP) led by President Nana Addo Dankwa Akufo-Addo is poised to creating opportunities for all in his administration.

He said the development of roads in the La-Nkwantang Municipal Assembly with Madina as its municipal capital in the Greater Accra Region is cardinal to the administration of the NPP.

According to him, already contractors such as Useer Construction Company Limited among others have moved some earth moving equipment into the municipality for the reshaping of some of the bad roads in the area.

‘’The start of work on the said bad roads fall in line with the promise by the Sector Minister for Roads and Highways, Kwesi Amoako- Atta made to the Chiefs and people of the area at a durbar organized by the Assembly attended by the MP and then Minister for Inner-City and Zongo Development.

He said works on the roads also forms part of the MP and Assembly’s decision to validate contracts signed by the previous National Democratic Congress’ (NDC’s) administration for the smooth take off the developments in the area.

He added that already areas like the University of Professional Studies, Accra (UPPA) all the way to the American House roundabout are been upgraded.

Others are the Rawlings Roundabout road to the Old Asanka area among others are being worked on as well as the Madina -Melcom area all the way to Presbyterian Junior High School area.

He explained that not too long ago the roads Minister assured the people of the area that all the needed assessments have been done and construction of roads will be start across the country as the president has given his preparedness for the construction of some major roads.

According Kwesi Amoako- Atta at the event said the country needs these levels of roads to be constructed before being described as a country with good roads in the sub-region.

He said many Ghanaians are yearning for good roods but it is not an easy task for the country to achieve this feat.

He claimed that good roads may sound good but good roads can be deadly if people are not well educated on how to use it.

‘’When the roads are good people turn to over speed on them thereby creating additional problems for the country but when the roads are bad they turn to be a little cautious when driving on it’’ he said.

The Minister made comment after assessing some bad roads for construction in the La-Nkwantang Municipal Assembly of the Greater Accra Region.

He gave the assurance that the president Nana Addo Dankwa Akufo-Addo has given a strong indication to have all these seventy-four thousand kilometres of the country’s roads fixed.

And very soon Ghanaians will see the roads being constructed going into the next tenure of the president before the Vice president Dr. Mahamadu Bawumia takes over from him (the president) he teases.