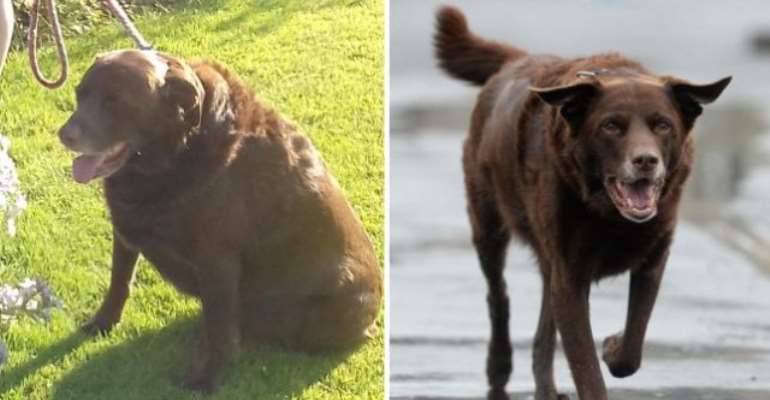 An obese dog has lost loads of weight after joining a ‘fat club’ for pets.

Chocolate Labrador Collie cross Monty has shed more than 3kg in the last year to help battle his arthritis, after being put on a strict diet. The 12-year-old dog loved to eat leftovers from his owners’ plates and weighed 38.65kg, which is far too heavy for his breed.

But after having doggy treats cut from his diet Monty is beginning to slim down. Owners Norma and Peter Churchill, from East Kilbride, South Lanarkshire, are hugely impressed by their new-look Monty, who now weighs 35.5kg.

The dog moved in with them in January after their daughter Gail, who was originally Monty’s owner, had a change in circumstances.

Retired Norma, 68, said: ‘He was my daughter’s dog, but her circumstances changed so we took him in. ‘She was living in Glasgow and I was going to walk him every day, so it was just easier to bring him down to live with us. 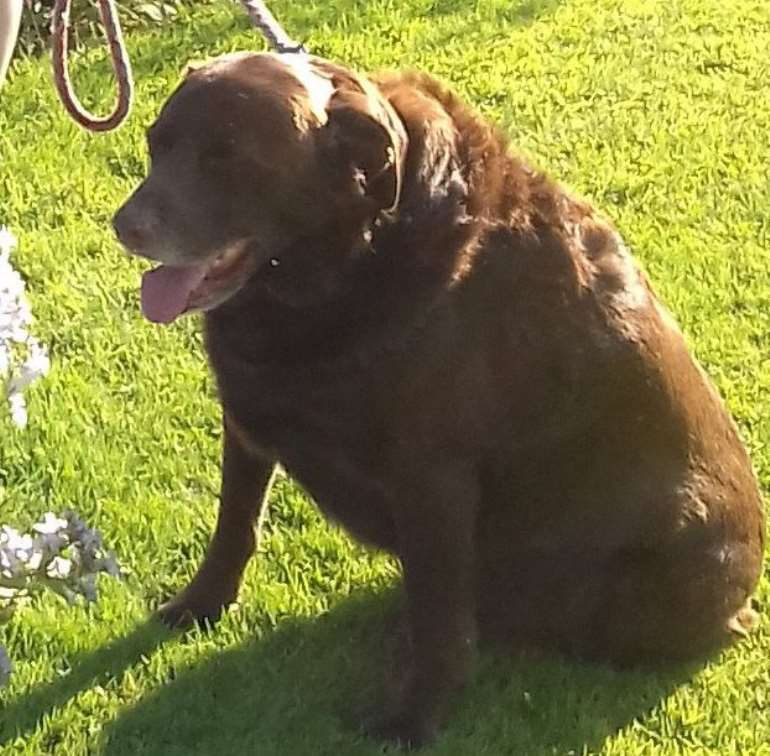 Monty before he lost the weight (Picture: SWNS)
‘Monty coming to live with us has given us a new lease of life. He was really overweight and it was badly affecting his arthritis.’

Last November an overweight Monty was taken to Pets’n’Vets by Norma and husband Peter, 71, and a weight loss programme was suggested – weaning him off his usual treats.

Norma said: ‘It’s basically a fat club for dogs. ‘We had to stop giving him all the doggy treats and the little bits from our plates – it’s just so hard to say no to him. ‘He goes to get weighed every month and has his measurements done too. ‘He jumps straight on the scales as soon as he goes in – he knows what to do. ‘Sometimes if he hasn’t lost or stayed the same we will just look at him, and he’ll jump off, run around the vet’s office, and get back on – as if to see if that’s made a difference.

‘In the last year, he hasn’t gained any weight at all, he has either stayed the same or lost.’ Monty is doing great losing weight (Picture: SWNS) Since starting his slimming club, Monty’s arthritis has significantly improved, and he can now enjoy four walks a day.

Norma said: ‘We can really notice a massive difference in Monty, as can the vets. ‘He’s doing much more exercise now too, he gets four walks a day and it much better on his feet in general now he has lost the weight. ‘He still has a bit to go until he reaches his target weight, which is 34.6kg, the last kilogram will be the hardest to lose – just like humans I suppose. ‘He is a big softy who loves cuddles. He is very docile and likes lounge about. ‘He has the nature of a Lab but the intelligence of a Collie.’

Overall, Monty has lost 2cm from his neck and chest and 5cm from around his stomach and is being fed two dry food meals a day. (Picture: SWNS) He is under the care of Hairmyres Vets – part of the Pets’n’Vets family – in East Kilbride. Jennifer MacKenzie, a registered veterinary nurse at Pets’n’Vets, said: ‘Monty was referred to my Pet Slimmers club as he was diagnosed with osteoarthritis.

‘The main factor to help in relieving pain is weight loss. ‘Owners decided to go for weight loss diet as their home diet of cutting down was not working well, he is currently on Royal Canin Satiety Support. ‘I calculate how much he is to get per day depending on how much weight he’s lost using an online computer system run by Royal Canin. ‘It tells me how much food in terms of grams/day he should be getting. 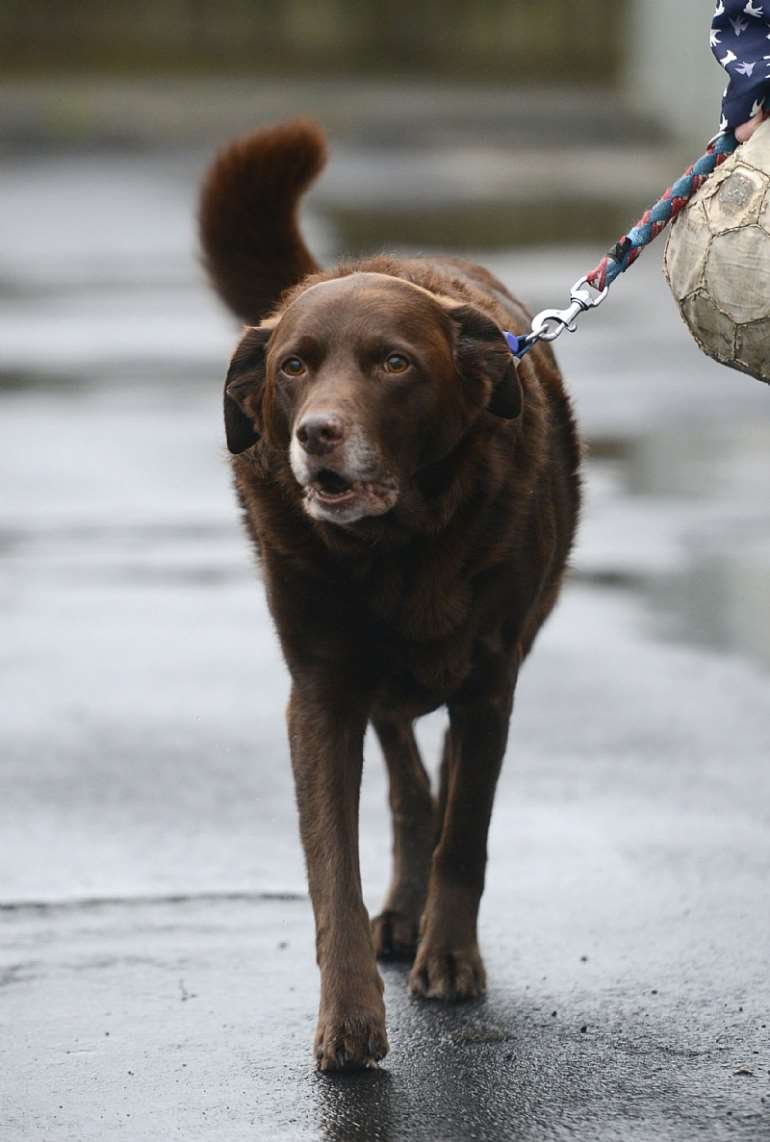 (Picture: SWNS)
‘We use this as a baseline to judge how much food he gets, as every dog is different their requirements are different too, so we change it so it is tailored for Monty. MORE:

‘Myself and Monty’s owners sat down and came up with a feeding and exercise plan that works well for him. ‘I see Monty on a monthly basis for regular weight checks.

‘In these weight checks I chat with the owners as to how he is getting on, take measurements of a neck, chest and stomach to see in terms of inches how much he has lost and generally have a chat to offer advice and support.’