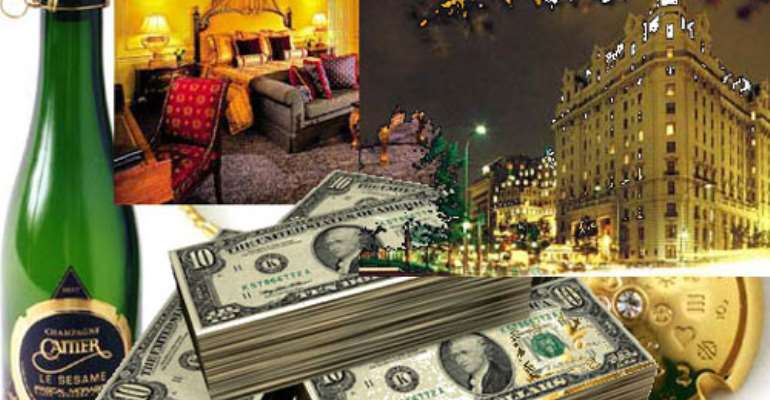 Oct. 28, The Enquirer -- Intelligence correspondence in the US have confirmed diplomatic rumours that the President of Ghana and his ministers were spoiling themselves and spending big cash at the plush Wiliard Continental, the most expensive hotel in Washington. Situated two blocks from the White House and located on the Pennsylvania Avenue, Willard Continental is considered the home of top Presidents who visit the US. It is also home to the crème de la crème business executives. It is said in America that it was from this hotel that term lobbying, which is now a multi billion industry in America is coined. Many African government officials are told not to stay at Willard hotel because of the cost factor. The suite where the President is said to be lodging,(right picture) cost between$1,200 to $4,200 a night. The above room rate attracts an extra 14 per cent tax. Breakfast costs $32, lunch $48 and dinner $85 bringing the total cost of food to about $165 per day. This figure attracts an extra 30 per cent tax, which brings the cost of food per day to $204.5. Multiply by the number of days spent. This is aside the cost of traveling business class to the US and the President's speculated $3,000 per Diem The cheapest (standard) single room (right picture) at Willard Hotel costs $610 plus 14 per cent tax. This brings the cost per room to $698.45 a day. Breakfast cost $32, lunch $48 and dinner cost $85 bringing the total cost per person to $165 a day plus 30 per cent additional taxes which brings the cost of food per person per day to $204.5. The cost of lodging in the cheapest room plus food for one person at Willard adds up to about $900 per day. If the minister takes breakfast at the hotel, which seems to be the case, then every minister and government official staying at the Willard may cost $900 a day multiplied by the number of days they are scheduled to live. These costs exclude ministers per Deim and cost of flying business class to the US. It has been confirmed from the Ghana Embassy in the US that President Kufuor was going to hold a trade luncheon to promote trade and tourism opportunities in Ghana to be held at the Pierce room between 12 to 1.30pm. An official at the Ghana Embassy confirmed on phone to the Enquirer's undercover man that the Luncheon was taking place at the Willard hotel on Wednesday. The Pierce room where the luncheon is expected to take place accommodates around 180-200 persons. Milika, one of the catering personal stated that the lunches will cost between $700 to $12,000 and does not include head table and additional services nor taxes. Taxes are 30 per cent total. Service Charge and Sales Tax-All food and beverage prices and 20 per cent service charge other than cash bar are subject to 10 per cent sales tax. The President's entourage includes Jake Obetsebi Lamptey, Nana Akuffo Addo, Alan Kyeremanten Shirley Ayorkor Botchwey, Kwabena Agyapong and Dr K Osei. When the presidential spokesperson, Kwabena Agyapong and Dr K. Osei were contacted on phone they responded but the Enquirer did not speak to them. The President's entourage is also said to include eight Members of Parliament (MPs) and some travel and tour operators as well as officials from the tourism sector. From the expensive hotel the President and his entourage will be visiting the International Monetary Fund (IMF) to talk about money. Ghana's poverty will also be discussed. President Kufuor said Ghana was going to sever relationships with the IMF next year. There are high profile four to five star hotels, which could have been far cheaper than Willard. These hotels are Adams Hay, Holiday Inn and Ritz Carlton.

You're frequent watcher of Akuapem Poloo's nudity on social ...
1 hour ago

I wanted to become a Catholic Priest but Ambrose Dery influe...
1 hour ago