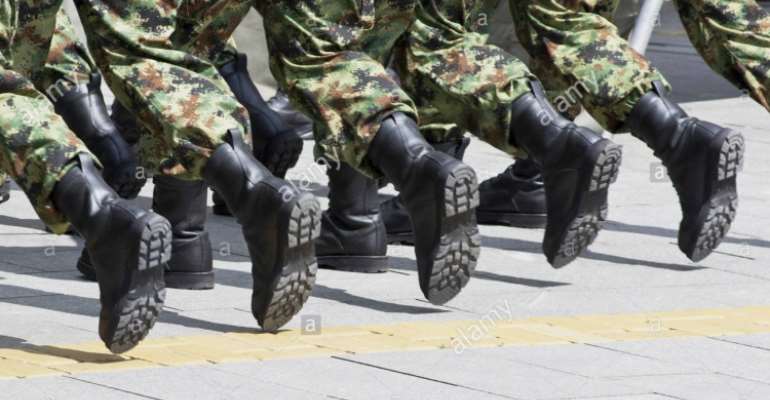 This write up is to put right perceived biases, misinformation and distrust among others, with regards to soldiers from the Junior Leaders' Company.

One such person is George Agyekum, the Chairman of the Tribunal of the "murder trial".

I watched and listened to him from the documentary "Who Killed The Judges and the Army Officer".

I could not but arrived at a conclusion of a deep lack of knowledge and evidence to support the argument that coup attempts were usually orchestrated or masterminded by soldiers from the erstwhile Junior Leaders' Company (ex-boys). It begs the question of whether proper and due process of getting facts were followed.

I will proceed with, to enumerate assassination and coup attempts those I recall to mind, for anyone minded to draw conclusions. The following are the attempts:

4. Col. EK Kotoka/Capt AA Afrifa, Lt Col AK Ocran - 1966 (Maj Gen Charles Barwah was killed by the plotters. - A.A. Afrifa is on record to have stated that 'As for Barwah, he resisted arrest most unwisely and thereby compelled an officer to adopt other methods which he himself knew would be adopted if he became stubborn' - "The Ghana Coup" a book he authored)

From the foregoing can anyone tell me or conclude how and why soldiers from the Junior Leaders' Company could be held for and accused of masterminding coup attempts, if not it was for political reasons and purpose.

I believe it is about time the stigmatization cease. I owe it to myself and others who take pride to have passed through this elite school and enjoyed the art of soldiership, to set the records straight and right history, so that, posterity will be the judge of events.

Now to the thrust of the article. When officers upon commission just as one enlists in the Ghana Armed Forces, they are required to swear an oath. An oath of allegiance:

Military discipline and effectiveness are built on a foundation of obedience to orders. Both the officer and the enlisted are taught to obey orders from their superiors immediately and without question, right from day one of their training.

What is "Lawful Command or Orders" Members of the "Military" who fails to obey lawful orders issued by their superiors risk serious consequences. I remember Section 22 of the Armed Forces Act, 1962 outlines the crime of willful disobedience by a military member, (an officer or enlisted). This "Act" conveys what constitutes the crime of disobedience of any lawful order (however, the disobedience does not have to be "willful" under this Act").

The "Act" require the obedience of LAWFUL orders. Not only should an unlawful order not be obeyed, obeying such an order can result in criminal prosecution. The problem associated with what constitutes a lawful command is very problematic. Military courts (tribunal, court martial or summary trial) have long held that military members are accountable for their actions even while following orders.

The consequences of "I Was Only Following Orders, have been unsuccessfully used as a legal defense in many cases (probably most notably by soldiers at the trial of the murder of judges and the army officer) before the public tribunal.

If my mind recalls, the first recorded case of an officer and soldiers using the "I was only following orders" defense dates back to 1967. During the Military Tribunal that convicted those who took part in the 17 April 1967 Abortive Coup attempt.

The members of the 2 Recce Squadron, Ho, have been charged for participating in an illegitimate operation (Operation Guitar Boy). The 5 man-Military Tribunal Court held that they "act at their own peril" when obeying such orders when such orders are illegal.

The May 15, 1979 revolt presented the military tribunal with more cases of the "I was only following orders" defense. The decisions during the trial reaffirmed that following manifestly illegal orders is not a viable defense from criminal prosecution.

It is clear, under military law, that military members can be held accountable for crimes committed under the guise of "obeying orders," as there is no requirement to obey orders which are unlawful.

Case study: Bdr Kwame Obidiaba was serving with the Foxtrot Company of the 23rd Infantry Battalion of the 7th Brigade at Domiabra, Oganoland. When assigned as part of a multinational peacekeeping mission being deployed to Kyidomia, Bdr Obidiaba and the other soldiers in his unit were ordered to wear United Nations (U.N.) helmets and armbands. Obidiaba refused the order, contending that it was an illegal order. Obidiaba's superiors disagreed. Ultimately, so did the court-martial panel. Obidiaba was found guilty of disobeying a lawful order and sentenced to dishonorable discharge.

Obidiaba's appeal to higher authority upheld the conviction, as did the Court of Appeals of the Armed Forces. Like the man who ride on the lion. What will be your fate? You disembark at your own peril and ride at your peril.

Never make a mistake that anything is "Too Dangerous" within the military! What about an order to participate in a dangerous mission? Can the military legally issue a "suicide mission" order? You bet they can.

Refusing to participate in a task will surely bring you face to face with the law. Some troops who were to participate in a mission thought it was "too dangerous" because their vehicles were unarmored (or had little armor), and the route they were scheduled to take is one of the most dangerous. These members simply failed to show up for the pre-departure briefing for the mission. You may ask!

Can they be punished for this? They certainly can. An order to perform a dangerous mission is lawful because it is not an order to commit a crime. Under current law, and the Manual for Courts-Martial, "An order requiring the performance of a military duty or act may be inferred to be lawful and it is disobeyed at the peril of the subordinate. This inference does not apply to a clearly illegal order, such as one that directs the commission of a crime." The exigencies of events must be considered since it may have serious contributing factors which should occasion a decisive action to obey or not to obey.

In fact, if it can be proved that one or more soldiers influenced others to disobey, as happened at Armed Forces Recruit Training Camp, Shai Hills, they may find the crime of Mutiny added to the list of charges. Mutiny carries the death penalty, even in times of peace.

For people to recognize the full implications of "dilemma of soldiers" during the early days pndc regime, we have to recognize that the military junta did not subscribe to constitutional law. Just remind yourself of the man who decided to ride on the lion. What will be your fate? You disembark at your own peril. It was an open ended command failure to act have its own retributive actions.

An order to commit a crime is unlawful. An order to perform a military duty, no matter how dangerous, is lawful as long as it doesn't involve the commission of a crime.

I end on the note that, George Agyekum's accounts of history of coup attempts is flawed and blinded by a misinformation from people he owed his allegiance to, either knew or know very little. Allegations of and about Junior Leaders' must be treated with contempt it so deserves.

Even though Bdr Mathias Cudjoe a product got himself involved. Can it be substantiated or suppose that, former members of the JLC had a penchant to instigate or stir up violent sentiment or course of action? Such speculations have long prevail and must be clarified.

What George Agyekum and others do not know, "Soldiers from Boys Company" could be trusted to get a task done with no supervision or very little of it. That was the hallmarks of these brilliant Warrant Officers/Senior Noncommissioned.

To lump all Junior Leaders as irresponsible and blood letting group not worthy of any commendation, for me has been an issue that has continued to agitate my mind. At least these young alma maters who were caught up in this political drama had been schooled in "military law" and understood the concept of law.

Can those whose actions and inactions contributed to the underutilization JLC justify closure of the Junior Leaders' Company?

Now the question I pose, could it be right to state that the Ghana Military Academy should have ceased to enlist for "cadets", due to the number of coups officers have been involved? That's the irony - the African mindset.

We enjoy the fruits and labor of the masses and turn around to spit in their face. If the measure that was used to close the Junior Leaders was sound judgment, then same should have applied. Such bad political decisions continues rob the noble military institutions.

We are who we are because of the scholastic achievement JLC provides. I ask every member of the erstwhile Junior Leaders' Company not to be ashamed to defend what we stood for, to get out of their carapace and make their voices heard and known.

The need to remind ourselves that, it is necessary for us as a duty to continue to hold aloft the principles and beliefs and must not be dismissed and thrown out. It is a duty. We owe to this contemporary times and future generations. We need to defend and prick the military authorities to get their axis right. We should not be discouraged but to stay the course of truth. We must not allow integrity and dignity to be run down by people who have no knowledge? And why late Brigadier JE Michel founded or established the school?

"Knowledge is Power" was boldly inscribed at Education Block. And adhering to the principles of "Leadership by Example" was the motto.

Lastly, I leave you with the seemingly absurd, self-contradictory statement. " To Obey or Not To Obey": Dilemma of the soldier.