"It’s None Of Your Business if NDC Wants Me Back" 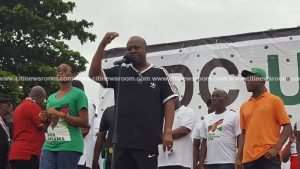 Former President John Mahama, has hit hard at his opponents who are criticizing his decision to lead the opposition National Democratic Congress (NDC) again in the 2020 general election.

One of Mr. Mahama's critics; Vice President, Dr. Mahamadu Bawumia, has said it will be suicidal for Ghanaians to hand over the administration of the country back to the former President.

The former president said such assertions are only coming from members of the New Patriotic Party (NPP) who believe in his ability to snatch power from them.

But rounding up his 3-day campaign tour of the Upper West Region, the NDC flagbearer hopeful said it is nobody's business if the party wants him back.

“I hear our colleagues say that, don't you have people in NDC, why are u bringing the former president? The question you should ask them is, is it your business? Is it your matter? It's not your matter, leave us to choose who we want.”

Dr. Bawumia says the living conditions of Ghanaians will be worse off if John Mahama and the NDC return to office.

He said the best way for the NPP to prevent the NDC from returning to power is to drum home the achievements of the NPP within these few months in office.

'I'm the only goalkeeper the NPP fears' – Mahama

John Dramani Mahama has taken a swipe at his critics who think if he gets the opportunity to lead the National Democratic Congress (NDC), it will derail the fortunes of the party in the 2020 general elections.

“It's like Kotoko telling Hearts don't put this goalkeeper in your goalpost if you put him we will score you. What is your matter? After all you want to score them. The truth is that the only goalkeeper the NPP fears is me. You must elect a person who can win power for us. I believe that if you think carefully about it, if you are looking for a person who can bring power to the NDC, then that person is me,” John Mahama added.

Mahama vs. Bawumia in recent times In the past months, Dr. Bawumia and Mahama have been jabbing one another over economic challenges during both administrations.

They have been accusing one another of poor economic management.

The two are drumming home their achievements ahead of the 2020 general election.