Yam Glut, Farmers’ Fury And ‘One District One Factory’ 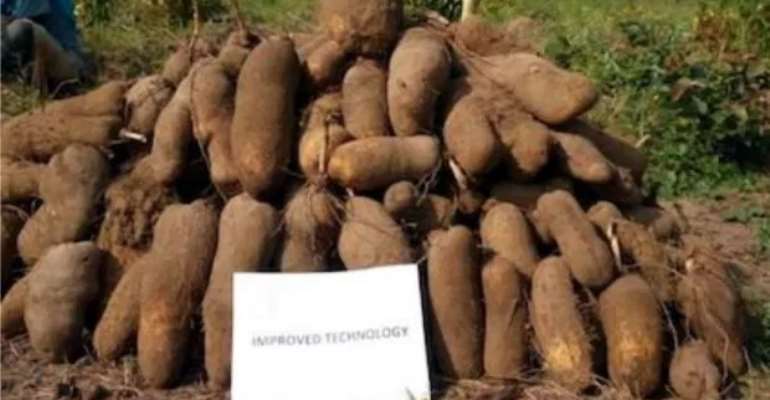 Yam farmers are faced with the consequence of a bumper harvest. The incentives given by government to Ghanaians to turn to increased food crop production and those already engaged in the occupation to do more is paying off. This coupled with the prevailing conducive conditions have occasioned in the impressive yields. We hear the maize story is equally exhilarating.

Indeed the dividends from the flagship agricultural programmes are beginning to be realized; the yam glut is an apt evidence of this fact.

We are nonetheless saddled with the challenge of a glut; our unpreparedness rendering us helpless in the face of this reality. A fortnight ago, farmers in the Atebubu area of the Brong Ahafo Region were furious and still are; the economic forces of supply, an excess of it, and a relative small market have overwhelmed them. In the face of the excessive yield and a relative small market, prices are in a downward spiral and it is telling.

We are furious too anyway because turning the fury on government is a wrong thing to do. The forces of demand and supply cannot be controlled under the circumstance. The prices can only be controlled when the supply is reduced but with perishable farm produce such as yam, such an intervention can be disastrous.

The programmes of government when they are fully operational could provide adequate and efficient response to the situation. The 'One District One Factory' programme could not have come at a better time. We urge government to put all the necessary facilities for the value addition to such perishable items like yam and others – especially as this would tie in with the flagship initiatives as already mentioned.

The Council For Scientific And Industrial Research (CSIR) should be linked to the flagship programmes because it has the wherewithal for adding value to most if not all farm produce in the country. The issue of yam glut with sufficient funding for this scientific institution would not arise at all. We have learnt about how the CSIR is producing cassava powder for the production of kokonte and gari from tubers of cassava.

It is our wish that by next year when the bumper harvests are replicated in other areas of food and cash crop production, the story of glut would be a thing of the past. Let the furious yam farmers take it easy as plans are made to contain a future glut of their produce.

Policymakers should consider the yam glut situation and respond as per the foregone suggestions.