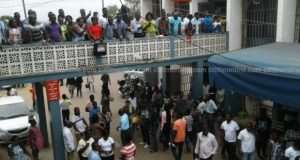 The Ghana Institute of Freight Forwarders (GIFF) has registered its displeasure again over GRA's latest decision to proceed with the implementation of the Cargo Tracking Notes (CTN) system despite their protests against it.

The President of the Association, Kwabena Ofosu Appiah in an interview on Eyewitness News described the development as a “monumental display of bad faith.”

The GRA on Tuesday [October 9, 2018] issued a directive indicating full implementation of the CTN from October 15, 2018.

But the President of the group believes the move is a breach of trust.

“This is a monumental display of bad faith. We had a committee of the joint business consultative forum made up of Freight Forwarder Associations and trade associations on one side and the Ghana Revenue Authority as the implementer on another side. Initially, we expressed our hunch about the structure of the committee because we thought that there was going to be an arbiter who will advise the presidency,” he said.

Mr. Ofosu Appiah added, “We had about five meetings, and the structure of the meeting was just questions and answers… The roadmap was that all these issues we raised were going to be presented to the president so that a forum will be created for the answers to be exact”.

He said the roadmap was however not followed.
Background
The freight forwarders embarked on a strike on August 27, 2018, to protest against the implementation of the Cargo Tracking Notes (CTN) system at the ports.

The action was necessitated by what the businesses described as government's failure to heed concerns on the policy which impedes trade facilitation.

Strike triggered by unresolved concerns
The President of the Ghana Institute of Freight Forwarders, Kwabena Ofosu Appiah, had told Citi Business News their action is to get a possible suspension of the CTN policy.

He further explained that they were open to further consultations by the government to get their concerns addressed and possibly reduce the days for the strike.

The CTN requires importers to provide real-time information on all consignments to Ghana to a global monitoring platform.