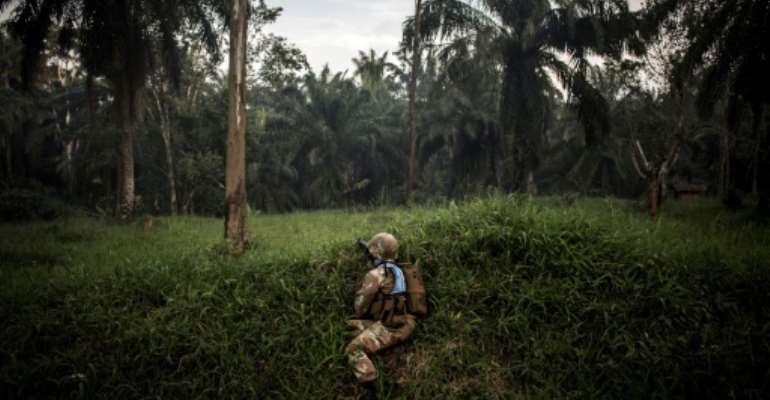 A soldier from the UN's DR Congo mission patrols for members of the ADF militia, which is thought to have killed more than 700 civilians since 2014. By JOHN WESSELS (AFP)

"I am always anticipating an attack," says South African soldier Maijeke of how it feels to be in DR Congo's "triangle of death", where he is part of a UN peacekeeping force helping the Congolese army hunt down a militia group that is slaughtering civilians.

There has been a recent spike in violence in this volatile eastern region of the Democratic Republic of Congo blamed on the Allied Democratic Forces (ADF), a shadowy armed group rooted in Ugandan Islamism.

Just last week, six civilians were killed during a night attack in the city of Beni by the ADF, which has no known leader and whose ideology and motives remain unclear.

AFP photojournalist John Wessels travelled for three days with 30 soldiers from the UN mission MONUSCO and the Congolese army to the troubled North Kivu province, where the ADF has killed hundreds of civilians since 2014. 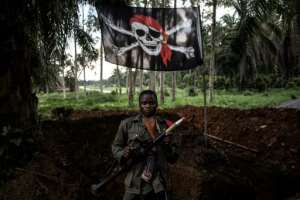 A DR Congo soldier at a military base, often targeted by the ADF militia in raids for weapons, ammunition and medical supplies. By JOHN WESSELS (AFP)

On Friday, after reports of heavy mortar and machine gun fire, the troops headed to the town of Oicha, north of Beni and near the border with Uganda.

The town's residents greeted them by throwing stones.

"The civilians get frustrated with us and MONUSCO, sometimes we arrive late, we have to fight harder to help the community change its mind about us," one of the Congolese soldiers said on the condition of anonymity.

Several homes in Oicha had been looted by ADF members, who melt back into the jungle after raids and attacks.

While the troops inspected the looted homes, deafening machine gunfire rang out from the jungle.

It seemed to be coming from near the town of Mbau, where 20 civilians were shot dead by the ADF in May. 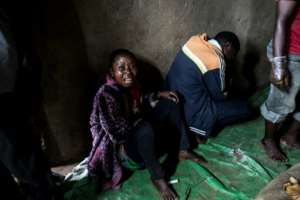 A mother mourns the death of two of her sons, allegedly killed the night before by ADF militia forces, in Beni. By JOHN WESSELS (AFP)

The troops are based outside Oicha, where the blue helmets sleep uneasily -- the ADF killed 15 Tanzanian peacekeepers in December in the deadliest attack on UN forces in 24 years.

And the ADF, which is thought to have killed a total of more than 700 civilians over the last four years, regularly attacks Congolese army bases for weapons, ammunition and medical supplies.

"This is my fourth deployment in the DRC, my first was in 2006," said UN peacekeeper Maijeke.

"This is the most intense deployment for me, I am always anticipating an attack," he added..

"The biggest difference this time is the escalation in the killings of civilians, this is heartbreaking for me, a serious concern." 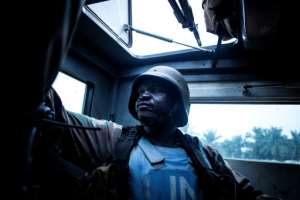 A member of MONUSCO, the UN's largest peacekeeping force, in the DRC town of Oicha. By JOHN WESSELS (AFP)

When the ADF killed 20 civilians in Beni in September, the locals condemned the failures of the Congolese army and the UN mission.

However MONUSCO maintains its intervention has prevented even greater carnage.

In the area known as the "triangle of death" between Beni, Mbau and Kamango, the troops face an enemy that knows every secret of the dense jungle and likely has informants in many communities.

On Saturday, the troops headed to the scene of a particularly violent ADF onslaught a few days earlier.

Members of the militia were said to have used two women as human shields during a shootout with Congolese troops that lasted four hours. Both women were killed. 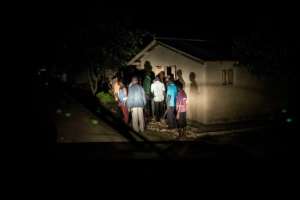 Oicha residents armed with machetes search for ADF members after their town was attacked. By JOHN WESSELS (AFP)

Everything seemed quiet when the troops arrived, except for the sporadic sound of gunfire.

The next day, Sunday, gunshots rang out again -- this time close to their base. The soldiers scrambled to put on their gear, but the jungle quietened down once their attention was turned to it.

What do they want?

Over three days hunting the ADF, some of the mystery surrounding them dissipated.

It was clear they are well-equipped with heavy weapons and well organised. Their guerrilla tactics of sudden, brutal assaults are usually to gain strategic positions, or needed supplies.

But much remains unknown. How many are they? Who is in charge? Who is arming them?

And most of all, what is their goal? 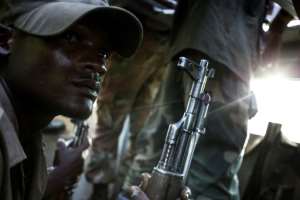 A Congolese soldier on patrol for members of the ADF. By JOHN WESSELS (AFP)

Both Uganda and the DRC insist they have a jihadist motive, but many observers say this is too simplistic and there has been no proven link with the global jihadist underground.

The ADF started out in 1989 with the aim of overthrowing Uganda's President Yoweri Museveni, who was seen as hostile to Muslims. But it went on to absorb other rebel factions into its ranks and started carrying out attacks in 1995.

Forced westwards by the Ugandan army, the group relocated most of its activities to DRC, finding a lucrative niche in the vast central African country's lawless, resource-rich east.

For Maijeke, the most important thing is ending the violence.

"There has to be a dialogue between the FARDC (Congolese army) and the ADF," he says.

"The fighting is at the expense of innocent civilians -- mouths must finish this conflict, not bullets."