The Town That Throws Wine Into The Sea

There’s an undeniable poetry to the emergence of sea-aged wine in a town that’s so proud of its maritime heritage. St-Malo and its harbour first rose to prominence as one of the primary ports of call for the French spice trade.

Malouins voyaged as far as Québec (the voyages of Jacques Cartier – a Malouin – led to France laying claim to Canada) and the Falkland Islands (originally named Îles Malouines in honour of early Malouin settlers).

In 1590, St-Malo declared independence from France in an effort to protect its maritime economy from the Wars of Religion, adopting the motto, ‘Not French, not Breton, but Malouin’. Although the autonomous Republic of St-Malo only lasted for three years, the Malouin identity continued in a spirit of unbridled self-determination, inextricably anchored to the sea.

Heude continued to place wine on the sea floor every year, gathering his friends to taste the previous year’s bounty. Beyond the initial resonance of the idea of sea-aging wine, there’s also a science to the process that Heude and his friends pegged with sheer intuition. Off the coast of Brittany, the temperature of the ocean floor hovers at 9-10C – the equivalent temperature of a deep wine cellar – while the water shields the wine from damaging UV rays. Plus, the twice-daily ebb and flow of some of the biggest tides in Europe mirror a technique used to age wine, particularly Champagne, known as remuage. The process of slowly tilting wine as it ages keeps the sediment from settling on the sides and bottom of the bottle and maintains the visual clarity of the wine.

The wines Heude selects change every year, though he is sure to include bottles of both regular and sparkling, and the differences in flavour of sea-aged wines varies by cuvée (the type, blend and batch of wine), which is the fun of it all. As a rule of thumb, Heude says, wines that have only been lightly filtered are poised for the most remarkable transformations underwater. As the tides move the natural sediment in the bottle, the flavour notes of the wine deepen. The effect is particularly enthralling with sparkling wine, as the changing tides refine the carbon dioxide bubbles to a crisp finish. 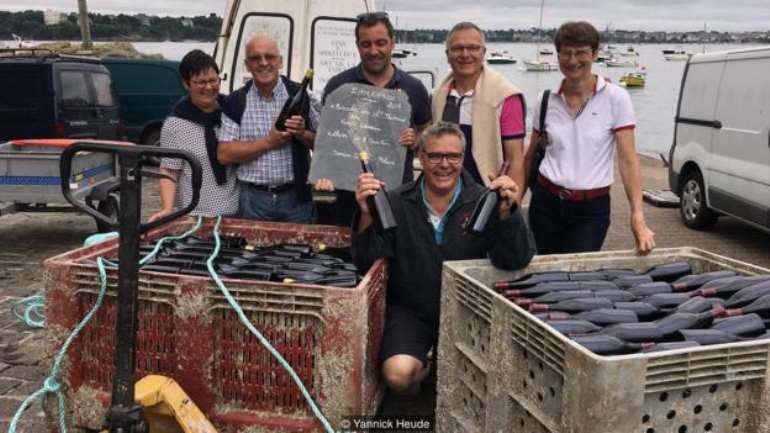 Heude (centre) came up with the idea to age wine in the St-Malo harbour while on a boating trip with friends (Credit: Yannick Heude)

After discovering the effects of sea-aging, Heude decided to make annual wine deposits to the harbour floor. Every year, on the first weekend of June, 100 gourmands and sommeliers from across France purchase tickets to experience the phenomenon in person.

The day-long affair begins with l’Immersion itself. Curious tourists watch as Heude and his team load up a fishing boat with nearly 700 wine bottles in the shadow of Tour Solidor, a 14th-Century tower originally built to control the entrance to the Rance river. Wine bottles are stacked in pallet boxes built for shellfish producers – fitting for a ritual so intimately tied to the local food culture. Extra holes in each box ensure water and seaweed can flow around the bottles during their year-long sojourn at the bottom of the bay. “We saddle them up, and then they’re ready to go,” Heude said. 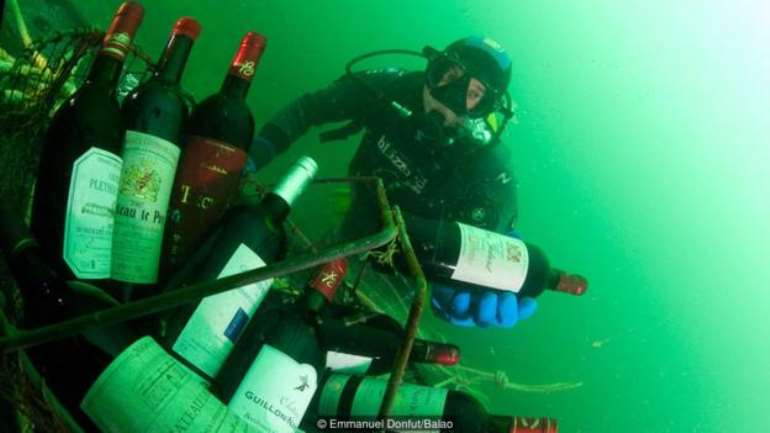 Off the coast of Brittany, the temperature of the ocean floor hovers at 9-10C, the equivalent temperature of a deep wine cellar (Credit: Emmanuel Donfut/Balao)

Once they’ve been brought out into the harbour, the boxes are lowered 15m to the sea floor with a trawler. A diver loosely anchors the boxes with enough leeway for each one to move in harmony with the tides. Then they pick up last year’s drop off (this year’s haul) in preparation for a boisterous unveiling. After 12 months of anticipation, Heude and his team push each box to the centre of the crowd. Extra treasures – shellfish, handfuls of seaweed – swirl around the barnacle-laden bottles, giving everyone a glimpse of what the bottles witness during a year on the sea floor.

A frenzy ensues as Heude invites onlookers to dive into a free degustation of the region’s gastronomic riches. Sourdough bread from Philippe Renault’s bakery in Dinard, Jean-Yves Bordier’s award-winning butter, oysters from Cancale and tripe from nearby Normandy round out the abundant spread. Amid the joyful flurry, expert sommeliers crack open the bottles to compare sea-aged wines with their cellar-aged counterparts. These tastings unfurl meticulous analyses by expert palates – but this is just the beginning. 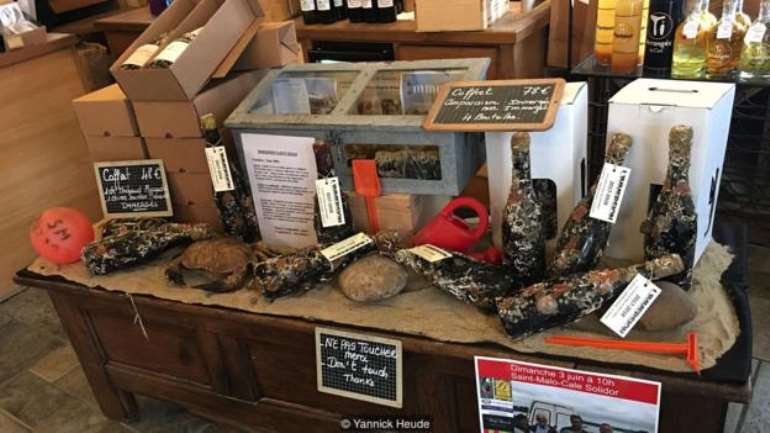 During l’Immersion, attendees are invited to taste the sea-aged wines, along with other local specialties, including bread and oysters (Credit: Yannick Heude)

After the wine tasting, participants who purchased tickets for l’Immersion in advance of the festival accompany the coastguard organisation Société Nationale de Sauvetage en Mer (SNSM) on a short journey to Cézembre, a small, uninhabited blip of sand off the coast of St-Malo that served as a German naval battery in World War Two. Most of its sweeping landscape remains enclosed by barbed wire because the island’s innermost areas haven’t been cleared of land mines, but the shore provides a safe and scenic venue for a riotous Malouin feast. Plates of fried seafood and salt-marsh lamb pile up next to more butter, freshly baked bread and bottles of sea-aged wine, still dripping with salty water . “That’s a little more rock’n’roll. It’s a big party and everyone loves that, too,” Heude said.

At its heart, l’Immersion is much more than a wine tasting. It’s a celebration of Malouins’ unceasing connection to the sea.

“That’s what has cradled us since our infancy, and at the end of the day, we can’t do without it,” Heude said. “Whether it’s in the arts or in food, it’s in everything: it’s there in wine tastings, in the shrimp, in the scallops, in the fish we catch, in the spring vegetables, in new potatoes. We’ve got it all here. We’ve truly got it all.”