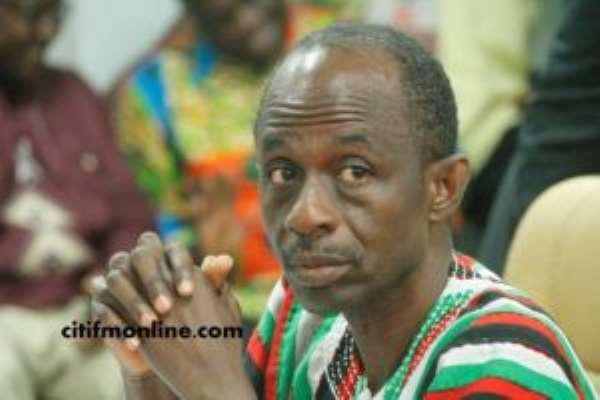 According to him, Aseidu Nketia is not abreast with issues to enable him make sound political arguments in favour of his party.

He has thus condemned Mr. Asiedu Nketia’s comments on a cabinet forensic audit report which alleged the misappropriation of funds by some state agencies under the erstwhile Mahama administration, saying he [Asiedu Nketia] is clearly ill-informed about the subject.

But responding to the claims on Citi FM/TV's The Big Issue on Saturday, the deputy Information Minister said the grounds on which Aseidu Nketia cast the aspersions were baseless because he did not know any of the fundamentals of the audit committee.

“There are fundamental things that any general secretary of any serious political party in this country would have checked. Someone with the record of public service; common governance issues, he misfires on it.”

Pius Hadzie therefore wondered why Asiedu Nketia will still be ta post with his little knowledge, and urged the NDC to dismiss him.

“It appears diminishing returns is catching up with the General Secretary of the NDC. He has been in public life for a long time. At this point, it is becoming clear that he is getting tired. I think that, it will be a good time, for the NDC to ask him to take a rest.”

Stop witch-hunting former NDC officials
The opposition National Democratic Congress (NDC) wants to the governing New Patriotic Party (NPP) to stop harassing its members and concentrate on what they have described as deep-rooted corruption in the NPP.

General Secretary of the NDC, Johnson Aseidu Nketia called for proper investigations into some shady deals in the Akufo-Addo government.

Meanwhile, the NDC has also asked their members not to subject themselves to any inquiries to be conducted by the governing NPP.

The party has asked President Akufo-Addo to remove the Board Chairman of the Audit Service, Prof. Edward Dua Agyeman.

According to the General Secretary of the NDC, Johnson Asiedu Nketia, Prof. Dua Agyeman does not have the integrity required to hold the position.

Prof. Dua Agyeman is also the chair of an audit committee charged to investigate allegations of corruption made against about 20 former officials of the John Mahama government.

Mr. Asiedu Nketia asked President Akufo Addo to sack Prof. Agyeman Dua if he wants to win the fight against corruption, since in their view, the man is a trickster and a hatchet man with no integrity.

“Dua Agyemang does not have the integrity and character to undertake such an assignment. The person who has been appointed by Nana Akuffo Addo to chair the Audit Service Board and who has been asked to recruit these private firms in the name of cabinet committee secretary is the one who has now been recycled to chair the audit service board to fight corruption.”

I haven’t said NPP is Majority in Parliament – Bagbin clarif...
4 minutes ago