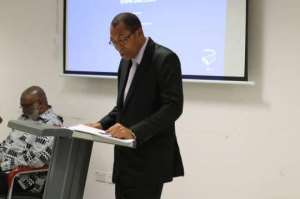 Mr Eric Kwaku Mensah, a Cyber Security Analyst of E-crime Bureau, has cautioned the public against downloading links and files on social media, saying they can compromise the smart phone devices.

He explained that such messages connected one to criminals as soon as they were downloaded.

This was revealed at a capacity building workshop for judges on mobile money fraud and prosecution on Friday.

The training, which was attended by 43 selected magistrates, circuit and high court judges, was under the auspices of MTN and E-crime Bureau, a Cyber-Security and Investigations Firm.

Understanding the MoMo Fraud Typologies and Modus Operandi, Mobile Money Operations and Mobile Money Eco-System were among the topics discussed.

He cited messages such as 'Hi I just got GHc100.00 free credit via this blue link>>,' was too good to be true but some people fell for it exposing their vital information on their mobile phones to criminals including SMS, pictures, microphones, calls and contacts.

The agent include counterfeiting, unauthourised access, spoofing and phishing SMS, and the customer is made up of false promotions, scams, false payment SMS, anonymous calls, currency counterfeiting, and cash out fraud.

The Security Analyst advised smart phone users to read terms before downloading applications as they could be used to spy on them.

Mr Bekoe Palmer-Buckle, of MTN Mobile Money (MoMo) Limited, advised that Bluetooth and phone maps should be switched-off when not in use.

He disclosed that thieves used Bluetooth to detect laptops that are hidden in cars, which they follow up to steal.