Minister Calls For The Protection Of Fisheries Sector 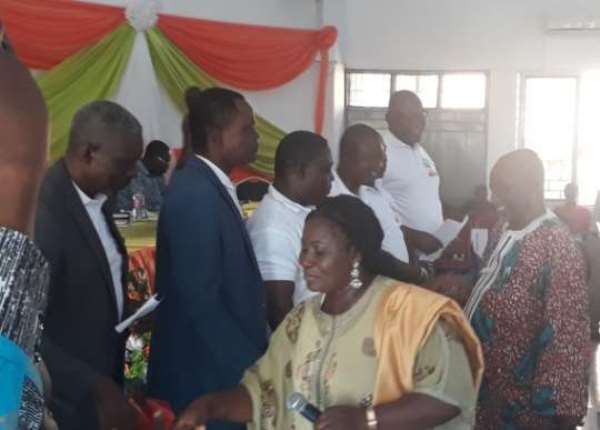 The Minister of Fisheries and Aquaculture, Madam Elizabeth Afoley Quaye, has asked stakeholders to protect the fishing industry as part of measures of safeguarding food security in Ghana.

'Let's all come together and see the fishing industry as ours; let us own it, for when we lose it, we wouldn't have it anymore… as stakeholders, we should be interested in knowing what happens to our fishing industry in Ghana. It's a natural resource that we have to protect,' she said.

She made this call on Thursday during the swearing in ceremony of the newly-elected executives of the National Fish Stevedores Association (NAFSA) and the inauguration of the Ports and Harbours Private Security Association (PHAPSA) at the Tema Fishing Harbour.

Madam Quaye observed that fish remained the cheapest and the preferred protein source with about 75 per cent of total annual production consumed in Ghana, and that the average

per capita fish consumption is set around 25 kilogrammes which was higher than the world average of 23 kilogrammes.

She informed that though fish was a very precious commodity, it was highly perishable.

'There is the need to maintain it as a good quality raw material. We need to properly handle and preserve the fish especially during its capture, landing and transporting to the processing plant or the market, 'she said.

She called on all stake holders to support any call for close season that was geared towards preserving fishes for the future, adding that, 'It's not to make anybody uncomfortable or take food from the table, but we want to save our fisheries and the natural resource that God has given to us.'

Appreciating the need of the two associations, she said, 'I have seen footages of how fishes are handled at sea and my heart bleeds, and people like you would be the ones to save the situation. When fishers go out to fish and they do all the wrong things we would lose our fishes.'

She said, the quality of fish should not deteriorate at the time of consumption.

'We are consuming a lot of stale fish; that were not handled properly at the time of harvest and the time of transporting. We transport our fishes in vehicles that are not right; we have to transport them in insulated vans to protect our fishes.'

According to her, these contaminated fishes could account for most sicknesses that affected the population.

The Deputy Minister of Transport, Mr. Daniel Titus Glove bemoaned the bad odour that had come to characterize the fishing harbour due to the poor handling of fish and therefore called for a clean up.

The General Manager, Tema Fishing Harbour, Mr. Kumi Adjei-Sam, in responding to the state of the Tema Fishing Harbour, said, 'We have started a process to modernize and develop the canoe basin. It was a traditional landing base so a lot of the structures there were put up haphazardly, and we want to change that. Our vision is to be a modern fishing landing harbour with good sanitation and well defined facilities.'

He also informed of the need to have a strong fishing community by strengthening the various associations that fell under the Harbour which included the NASFA and PHAPSA.

Police made me stand in the sun for 5hrs for not wearing fac...
54 minutes ago