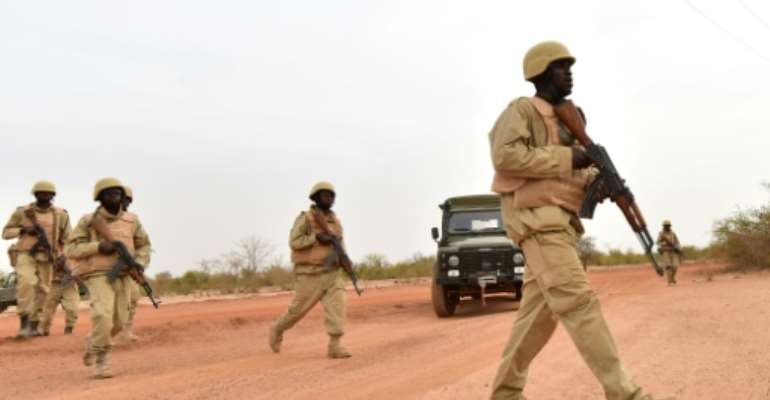 The army and police are being increasingly targeted by jihadists and rebels. By ISSOUF SANOGO (AFP/File)

Six soldiers were killed Thursday and several others seriously injured when their vehicle hit an improvised explosive device (IED) in eastern Burkina Faso in the latest attack in the jihadist-hit country, security sources said.

"On Thursday morning, a military vehicle hit a homemade explosive device between Gayeri and Foutouri. Six soldiers were killed and several others were seriously injured," a source said.

Another source said three people were in a "critical condition" and were being evacuated to Ouagadougou, the Burkina capital.

"A cleaning up operation is under way," the source said.

The attack came a day after a gendarme was killed and another injured in the country's north, where three people, including an Indian and a South African national, had been kidnapped at the end of last month.

In 2015, Burkina Faso, one of the world's poorest countries, joined a string of countries in the Sahel region to come under pressure from jihadists.

Rebels began staging cross-border raids in the north of the country from neighbouring Mali.

Using classic guerrilla tactics, the rebels aim at police and the military with gun attacks and roadside bombs, target buildings and personnel perceived to represent the state, and abduct individuals.