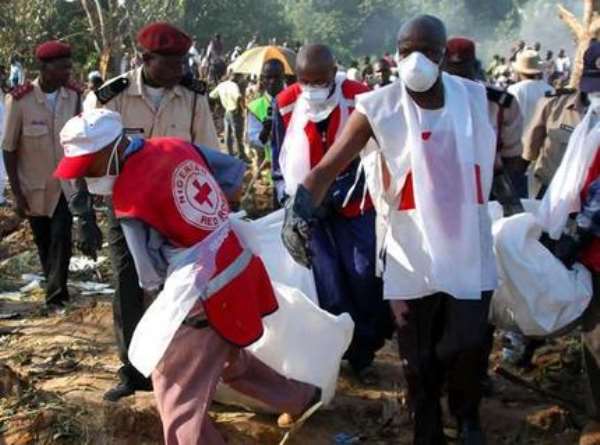 ... four officials of the NIB Included Grief has engulfed the National Investment Bank (NIB) Headquarters in Accra and many homes all over Ghana following last Saturday's air disaster near the Nigerian village of Lissa in Ogun State.

Ten of the 117 people killed in the tragedy were Ghanaians, four of them officials of the NIB.

The Boeing 737 aircraft belonging to Bellview Airlines was on its way from Lagos to Abuja when it crashed near the remote village,50 kilometres north of Lagos.

As details of the casualties became known,top executives at the NIB headquarters in Accra were locked in a crisis meeting from which they emerged tight-lipped, and in no mood for any disclosures until the families of the deceased had been notified.

ECOWAS Executive Secretary ,Dr Mohammed Ibn Chambas, choked with sorrow disclosed on BBC radio that among the dead was another Ghanaian,Emmanuel Quaye,the Director of Finance at the Ecowas Headquarters in Abuja.

Mr Quaye was returning from a West African meeting on Disaster Management in Accra. Other Ghanaians killed in the crash included one member of the crew and others who were connecting the flight from Lagos to Abuja.

According to reports, the dead included some four officials of the National Investment Bank.

Mr Isaac Djabatey, Secretary to the Country Manager of the airline, confirmed this to the Daily Graphic but refused to give the names of the Ghanaian passengers, citing security reasons.

He said the 10 who perished were known Ghanaians who boarded the Bellview plane from Accra to Lagos and connected the Boeing 737 to Abuja.

He said the airline was waiting for the report of the search and rescue team to determine the cause of the accident.

Mr Djabatey said all the aircraft operated by the airline were insured. The cause of the crash is still being investigated, while the black box flight recorders have reportedly been found.

According to reports the pilot of Bellview Airlines flight 210 sent a distress signal just after take off from Lagos for Abuja in stormy weather at 20:45 local time on Saturday.

According to reports, a storm was passing through Lagos, Nigeria's commercial capital about the same time the flight took off.

The plane was found near the village of Lissa in Ogun state, with dismembered and burnt body parts, fuselage fragments and engine parts which covered a stretch of about 30 kilometres.

The crash was the first by one of the airlines' planes in the company's 12-year history. The airline is a private Nigerian company, popular with foreigners and wealthy Nigerians,which flies routes throughout West Africa.

Meanwhile, Nigeria has declared three days of national mourning for the passengers and crew of the commercial airliner.