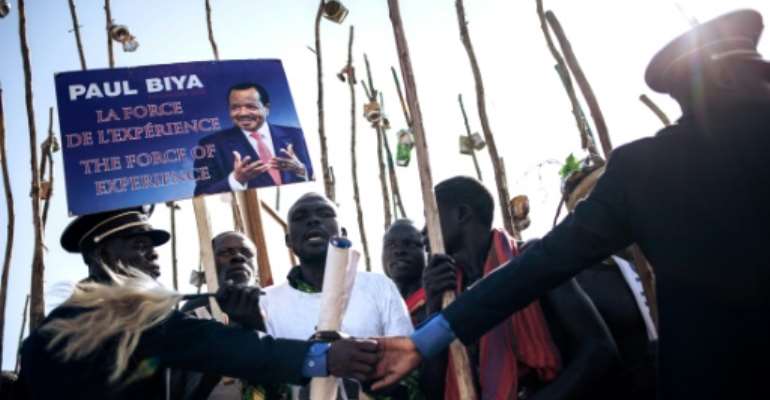 With more than 1.2 million of Cameroon's 6.6 million voters, the far north is the country's most populous yet poorest region -- a strategic target in this weekend's vote. By ALEXIS HUGUET (AFP)

"It was horrible, you have no idea," says Abdoulaye, 23, whose village in northern Cameroon was overrun by Boko Haram in 2015.

He used to live in Kerawa, a village that was often targeted by fighters from the Nigeria-based Islamist group until army patrols were stepped up, ushering in a return to normality.

Despite not having any identity papers after fleeing and therefore being unable to vote, Aboulaye vocally supports President Paul Biya, who will seek a seventh term at polls on Sunday.

A poster in Biya's signature blue adorns the trolley he uses to transport his wares, and Aboulaye argues passionately that a vote for Biya is a vote "to expel Boko Haram from the far north region". 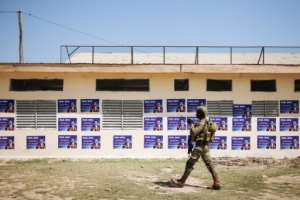 President Paul Biya will seek a seventh term at polls on Sunday. By ALEXIS HUGUET (AFP)

Home to more than 1.2 million of Cameroon's 6.6 million voters, the far north is the country's most populous yet poorest region -- a strategic target for Biya.

Days ahead of the vote, the Elecam electoral commission sought to reassure voters in the region that "there will be a polling station in each community, as planned", according to the organisation's regional chief Amadou Ali.

Though the suicide bombers who once terrorised the region are gone, low-key attacks happen almost daily.

In September a convoy of the military's rapid reaction force was targeted not far from Achmide, on the Nigerian border.

'Isn't a day without an attack'

Other sporadic attacks, including looting of shops and food stores, are frequent blights on daily life.

"The truth is that there isn't a day without an attack," said one prominent figure in the region. 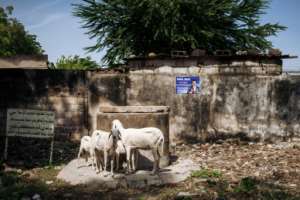 Sporadic attacks, including looting of shops and food stores, are frequent blights on daily life in Cameroon's far north. By ALEXIS HUGUET (AFP)

"The far north is safe," responded a senior officer based in Mora.

Two other members of the election organising body said however that some polling stations in "danger zones" would be "regrouped" to "protect them from attack".

Election candidates of all political stripes have headed to the provincial capital Maroua, taking heed of the region's electoral importance.

Biya, who has ruled Cameroon for 35 years, spent several hours in the town on Saturday. 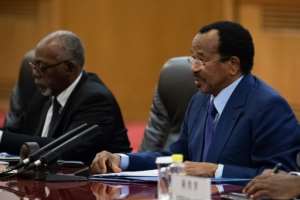 President of Cameroon Paul Biya (R) has ruled the country for 35 years. By Roman PILIPEY (POOL/AFP/File)

During the campaign rally, parliament speaker Djibril Cavaye Yeguie, who is from the region, said that "100 percent" of the area's voters would back Biya.

The far north remains a crucial factor in deciding the election, added the prominent figure who declined to be named.

"The population is poor and easily manipulated," said a social sciences researcher in Maroua who alleged that "here, you can buy a vote from someone poor for 2,000 CFA francs (3 euros, $3.50)". 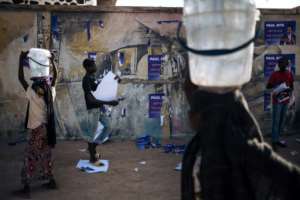 In the far north, 74 percent of people live below the poverty line compared with 37.5 percent nationally. By ALEXIS HUGUET (AFP)

In the far north, 74 percent of people live below the poverty line compared with 37.5 percent nationally, according to the International Crisis Groups (ICG) think-tank.

"Unlike the rest of the country there's no one here to take control so there's always a risk of fraud," the researcher said.

Elecam also published a list of some 50 polling stations that were difficult to access because they were near "impassable roads", "flood zones" or "rugged terrain".

The researcher said that the absence of observers in some areas could lead to ballot stuffing. 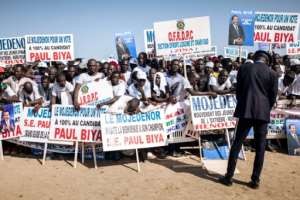 Everyone interviewed in the region said that, after four years of conflict, they preferred to concentrate on "more pressing problems" than politics.

Abdoulaye dreams of making enough to pay for his sick mother's care and to resume his studies.

The conflict forced him to curtail his education before graduating from high school. He is now asking, "Will Biya enable me to do that?"