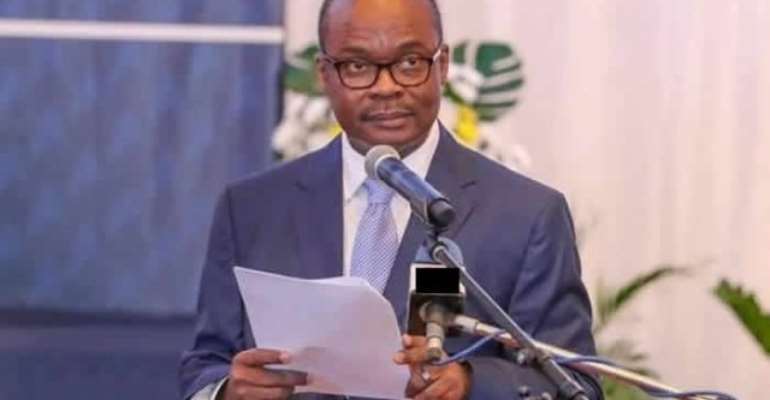 Dr, Ernest Addison is Governor of the Bank of Ghana

The cost of liquidating the seven troubled banks has reached almost 13 billion cedis.

This was disclosed by President Addo Dankwa Akufo-Addo at the opening of new headquarters of Standard Chartered Bank in Accra.

Finance Minister Ken Ofori Atta earlier this year disclosed that cost of liquidating the troubled banks was about 8.5 billion cedis.

This was as a result of bonds issued to support the operations the new Consolidated Bank and some funds that were used to assist the operations of the banks in liquidity support before they were collapsed by the Bank of Ghana.

Concerns about problems in the banking sector

According to the President, “GH¢8 billion bond issued by the Ministry of Finance, and GH¢4.7 billion of liquidity support from the Bank of Ghana”, adding this should support government efforts to deal with the banking crisis.

He stated that these interventions had saved more than 1,147, 366 million Ghanaians and their businesses.

The President was of the view that the clean-up of the banking sector was necessary to safeguard the health and strength of the economy.

“I have said it before, and let me reiterate that those responsible for the sequence of activities that led to the crisis will face the full brunt of the law if they are found to have broken the law, and suffer all the consequences prescribed by law,” the President said.

The President also justified government’s decision to liquidate the troubled banks, insisting that was the best option out for the economy.

The President at the programme held Wednesday maintained that a lot more measures have been introduced aimed at developing the entire financial system citing programmes like the National Financial Inclusion and Development Strategy (NFIDS), which is currently before Cabinet.

President Akufo-Addo believes this strategy, when implemented, should help the economy increase the penetration of financial services from 58% in 2013 to some 85% by 2023.

Dealing with challenges in the savings and loans sector

The Governor of the Bank of Ghana, Dr. Ernest Addison in his address noted that the banking regulator has come very far in dealing with insolvent savings and loans companies.

“We have all been witnesses to how customers of these institutions have reacted. These developments are not a reflection of the industry. We have very strong banks and Savings and Loans companies that are doing well. However, we are working with the Ministry of Finance on a recovery plan which we expect to be implemented soon,” he stated.

Improve cybersecurity
The Governor of the Bank of Ghana announced that to improve upon Cyber Security, the Central Bank would on October 22 inaugurate the cyber and information security directive for the industry.

Subsequent to the issuance of the directive, banks would be required to follow an implementation schedule to ensure that effective cybersecurity controls are in place to counter any form of cybercrime.