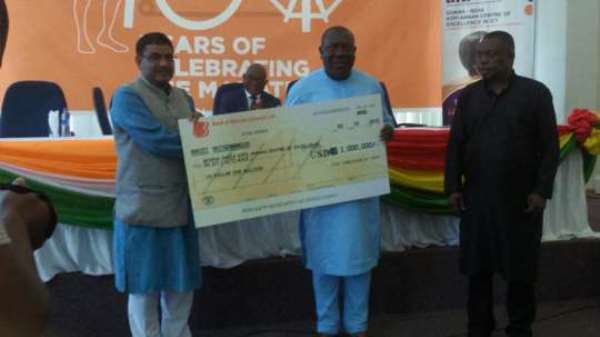 The Government of India has presented a cheque of one million dollars to the Ghana-India Kofi Annan Centre of Excellence (GI-KACE) in Information Communication Technology (ICT), to strengthen ICT Research and Innovation in country.

The fund, which is a grant, would support the Centre in capacity building for the expansion needs of ICT research product development and service delivery.

Over the next three years, the grant would be used to develop human resource and state-of-the-art ICT laboratories, a self-sustaining system to take up assignments in technology development, research backed by a self-sustaining business model.

Speaking at a brief ceremony to hand over the cheque in Accra, Professor Aaron Mike Oquaye, Speaker of Parliament, called on the authorities of GI-KACE to lead the rationalization and categorisation of ICT studies in the country to ensure standardization.

He said there is the need to re-assess the mandate of the Centre and make it autonomous to enable it to contribute to the government agenda.

Prof Oquaye said technology is the future of the world and urged the youth to embrace and harness its benefits to address the challenges of the country.

'ICT is transforming the world to the extent that it is helping countries to conduct successful elections, tax system, transport, agriculture, environment and water and sanitation,' he said.

Prof Oquaye said Parliament would collaborate with GI-KACE and other stakeholders to computerize the parliamentary work and make it paperless.

Touching on the bilateral relationship between Ghana and India, he said that Ghana has benefited from many projects including the grant for the building of the Jubilee House, grant for GI-KACE and farming equipment including tractors, vehicles and motorbikes.

He likened Mahatma Ghandi, the Father of Modern India's achievements to that of the late Dr Kwame Nkrumah, and Mr Nelson Mandela, ex-president of South Africa saying Gandhi campaigned against oppression and was a freedom fighter.

Mr Birender Singh Yadav, India High Commissioner to Ghana, who presented the cheque, said the support was part of activities to mark the 150th birthday celebration of Mahatma Gandhi.

He said Gandhi was a transformative and inspirational figure who served as a shining beacon of hope for millions of people fought for the life of equality, dignity, inclusion and empowerment.

Mr Yadav said in an era where climate change and environmental degradation has become central issues of discussion, the world could refer to the thoughts of Gandhi.

'He continually educated people to exercise restraint and compassion while utilising natural resources and, he himself led by example in doing this. He cleaned his own toilets, ensuring clean surroundings. He also ensured minimal wastage of water and when he was in Ahmedabad, he took great care to ensure that unclean water did not merge with the Sabarmati.'

Mr Kwasi Adu-Gyan, Director General of GI-KACE, said a team of officials from the organization would travel to India this month to sign a memorandum of understanding to formalized the support that would witness deliverables including the establishment of a state-of-the art facilities in the areas of software development, quality control, and E-Learning facilities.

He said as part of the grants GI-KACE would with the Centre for the Development of Advanced Computing (CDACIndia), develop and deliver online content to enable both public and private workers to build their capacities in ICT to bridging the digital divide.

The grants, Mr Adu-Gyan said, would help the Centre to develop its capacity be in line with worldwide standards and processes of doing things in the field of IT and Engineering.

'These are international benchmarks that ensure that ICT/Engineering products and services created by an organization are of the highest quality and accepted worldwide,' he added.