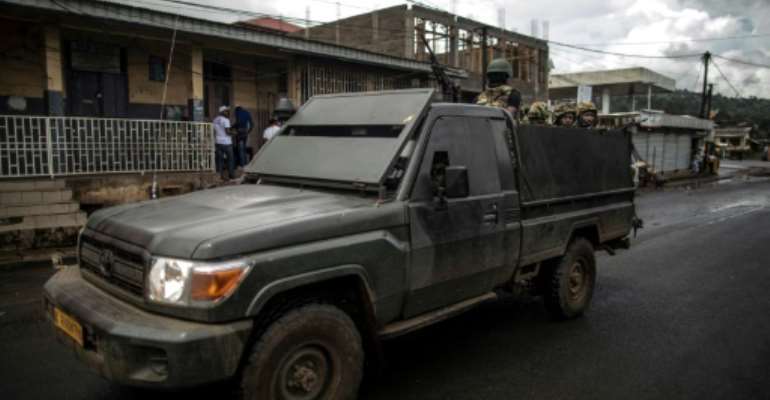 There was a heavy security presence in Buea, capital of the English-speaking South West province as supporters of President Paul Biya gathered arrived to support his re-election campaign. By MARCO LONGARI (AFP)

Muha, 35, was one of several hundred activists who travelled to the heart of the separatist insurgency engulfing Cameroon Wednesday to support President Paul Biya.

They braved persistent insecurity and driving rain to journey through the foothills of the mountains around Buea to reach the capital of the majority English-speaking southwest region.

The southwest, along with the northwest, has been torn by two years of clashes between the English-speaking fighters who want to break away from majority francophone Cameroon and government forces.

"No, there's nothing wrong here," added Muha, a francophone. "I believe in Cameroon we have a system to fix problems."

Muha, who is from the nearby coastal town of Limbe, wore green Islamic dress and a blue-and-white Paul Biya scarf.

Around him women in wax print dresses emblazoned with the president's face sang under Cameroon flag-coloured bunting, as men seated on plastic patio chairs played drums. 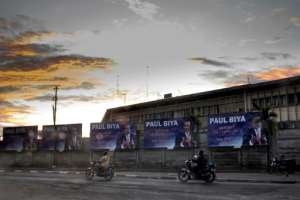 President Paul Biya has kept a low profile during the campaign. By MARCO LONGARI (AFP)

In the end, Biya did not attend the rally which was held within a security ring of steel.

The president, dubbed "the Sphinx", keeps a low profile and has so far only attended one campaign rally ahead of Sunday's polls.

But the local police chief insisted Biya would not be deterred by the security situation.

"There is no problem here," commissioner Aboubakar Yacoubu told AFP. "Those linked to the separatists have fled," he added.

Despite Yacoubu's confidence, this town and others in English-speaking regions were under strict curfews on Sunday and Monday, as anglophone separatists marked one year since a symbolic declaration of independence.

Gunfire could be heard at three locations across Buea on Monday as skirmishes between secessionists and security forces continued unabated.

More than 400 civilians, 170 members of the security forces and an unknown number of separatists have died since the beginning of the crisis.

"The people of Buea support Biya," said Dimitri Assoa, 40, who runs a local society group. "The majority here are local. We want to say no to all the actions committed by the separatists." 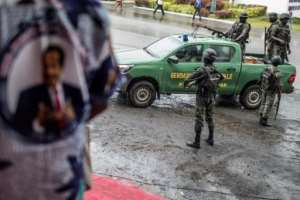 The security forces were out in force days after the town was under curfew on the first anniversary of English-speaking separatists making a symbolic declaration of independence. By MARCO LONGARI (AFP)

But as the pro-Biya convoy sped to a grandstand in the shadow of cloud-covered mountains, local people made hand gestures.

But the soldiers, posted every 100 metres along the route, took photos of the convoy on their phones as the convoy swept past.

Armed men in civilian clothes were also spotted near the rally in an unmarked pickup, speaking to regular troops.

Most of the town's shops including bars, banks and hairdressers were shuttered, their staff having apparently fled.

Many of those in the grandstand at Bongo Square spoke in French and had been brought in on buses registered in other areas of Cameroon.

"They intimidate people with guns," said Assoa of the insurgents.

The security forces were not guilty of doing the same to the region's English-speakers, he said. "I have not seen such intimidation."

But English-speaking locals have long complained of abuses at the hands of security forces. 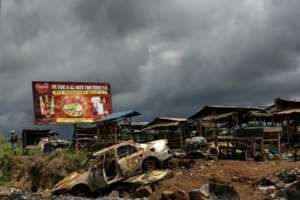 Locals gave different versions of who had fired on the burnt-out car in the ditch that had come under attack a week earlier. By MARCO LONGARI (AFP)

Just miles from the rally, a burnt-out lorry and car sat in a ditch opposite a market, charred, twisted metal spilling into the road.

The vehicles came under attack a little more than a week ago, locals say, but they are divided about who lit the fires.

"It was the Ambazonia guys," said a passing driver, referring to the separatists.

But one young woman said: "We don't know. But I'm sure there was shooting".

At least five bullet casings lay around the scene in the eerily silent Mile-15 area of the town.

Ruling party MP Etombi Gladys told AFP: "The campaign will cut through all of the divisions of our region."

But with separatists vowing to disrupt polls in English areas, and many thousands of the region's voters displaced due to the violence, it is unclear if Sunday's polls will be staged safely in anglophone areas.

"The security comes from God," said Etombi. She was confident Biya could win, she said -- even in the English-speaking region.