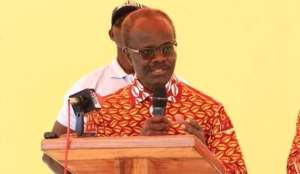 The Founder of Groupe Ndoum has appealed to customers of his bank, GN Bank to cease panic withdrawals that have hit the bank in recent times.

Dr. Papa Kwesi Ndoum noted that his bank is financially sound and the panic withdrawals would rather affect the bank.

He told traders at the car parts retail market at Abosey Okai in Accra Wednesday, that the panic withdrawals have kept him awake at night.

“I’ve had sleepless nights for the past few weeks because of the panic withdrawals,” he lamented.

Speaking to Joy News’ Nancy Emefa Dzradosi, Dr Ndoum explained that when depositors bring their monies to banks, what the banks do is to invest the money and also loan those monies out to contractors and business folk.

“So when 20% or even 15% of the depositors decide one day that they’re going to withdraw all their money, then we are going to have a problem,” he said.

He added that the banks keep some of the money to transact day to day business while some are kept with the central bank “so when there are panic withdrawals, it affects you negatively and the most immediate problem is you run into liquidity challenges”.

“…this happens because the money you are supposed to use for regular withdrawals, you give it to someone or two people,” he explained.

The 2016 Presidential candidate for the Progressive People Party (PPP) also told the traders that investing in local banks is the only and surest way for sustainable development in the country.

“If you go to the small towns, it is us who are there and not the foreign banks,” he said.

Dr Ndoum also revealed that by the end of 2018, GN Bank would have provided the Bank of Ghana with its minimum capital of GHS400 million.

He has also appealed to Ghanaians interested in owning shares of GN Bank to approach the institution and purchase the shares.

Speaking on merging with other banks, Dr. Ndoum didn’t dismiss the possibility but stated that that is not for the purpose of achieving the BoG’s requirement of GHS400 Million.

Read: We can recapitalise on our own - GN Bank
He explained that creating mergers is just to form a stronger local bank and not to reach the minimum capital requirement.

All the banks ran into one liquidity challenge or the other although the BoG has clarified that some of the banks shouldn’t have existed at all.

Sovereign Bank, for instance, was cited to have obtained its license under false pretences; using non-existent capital.